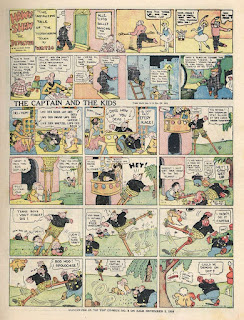 Hawkshaw the Detective introduces us to the idea of non-classed characters/mobsters being able to "level up" certain skills.

The Captain and the Kids reminds us that stilts could be a good way for Heroes to enter hideouts on an upper level.

Chris Crusty gives us a good idea for a trap; the Hero touches something and a paralyzing electric current keeps him there (on a failed save vs. science, of course).

One does not normally run the risk of having to roll again to see if you hit a random target after missing in melee, but if the Editor wants to run a campaign with the feel of Phil Fumble, he can add that rule. 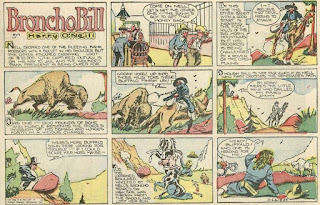 I think bison are way too cute to be shooting at, but a bison could be a fierce opponent for low-level Heroes, so I'll make sure they're statted in the Mobster Manual. 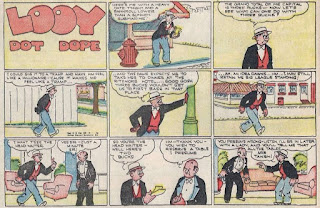 $2 is a sufficient bribe for a waiter at even the fanciest of restaurants, according to Looy Dot Dope. 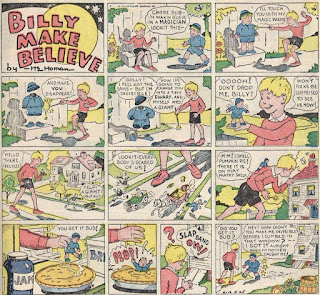 If taken seriously, Billy Make Believe would definitely need to be statted as a magic-user -- but note the peculiar effect here, where shrinking Bub ends his invisibility. What that suggests is that spells cannot be stacked, but casting one ends the duration of the previous spell on that person. Luckily for magic-users, I don't intend on making magic work like that in Hideouts & Hoodlums -- unless I see a lot more evidence of this happening... 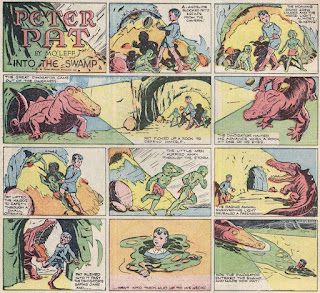 Peter Pat is going to require more watching, as this dinogator is rather interesting. The lights shining from its eyes reminds me of the blindheim, a monster in the old AD&D Fiend Folio. I'm thinking I would stat a dinogator as a ...6 HD mobster? 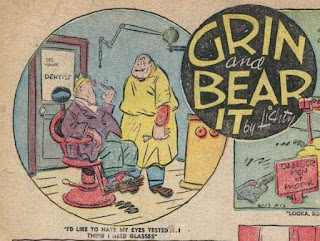 From issue #10...I thought this was good, subtle humor.

And, coming full circle back to Hawkshaw the Detective, we learn that laughing gas (nitrous oxide) can be mixed into milkshakes and retain its properties. Who knew? (Actually only works in comic books -- in real life nitrous oxide is a safe food additive and is even used as a propellant in whip cream cans!).

(Scans courtesy of Comic Book Plus.)
Posted by Scott at 9:28 AM