The sports genre doesn't get a lot of attention on this blog, and Wally Williams gets even less (in fact, debuting here on the blog), but this story deserves special attention. Instead of the college kids fending for themselves, they unrealistically approach Wally's grandpa and ask him for help.

How old is Gramps? Gramps claims to have worked with Mark Twain, which may sound off, but Samuel Clemens died in 1910. Someone who was 18 in 1910 would be only 48 now in 1940. This bears in keeping in mind, when considering who your Heroes might have known in their backstories...

And Gramps actually has some good ideas. This underground newspaper is a sort of pre-Internet crowdsourcing for crime prevention. 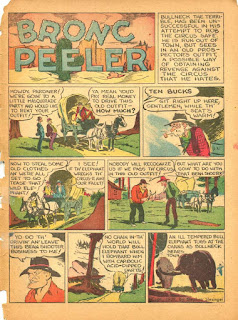 I'm not sure if $10 is a reasonable rental price for a wagon and two horses in 1940, but it is for at least this old geezer.

This page raises other questions. Can a pea shooter/slingshot launch a dart? How great an effect would a small dose of carbolic acid have on an elephant?  If a person drank carbolic acid, it would cause acute gastroenteritis (inflammation of the stomach and intestines), leading to vomiting, collapse and death -- but only on a failed saving throw.

This is where game mechanics surrounding poison kind of break down in the game. The effects described always assume human mass; not only should increased Hit Dice allow mobsters to shake off the effects of poison, but should lessen the effect of poison when it does take effect. But how to adjudicate that? 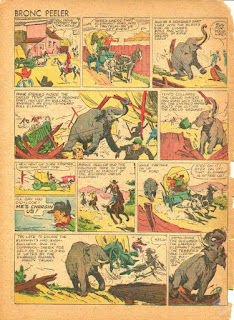 I share this page so we could talk about movement rates. Can a charging elephant really overtake horses pulling a wagon? There are a lot of unknowns here, like how much weight the wagon is loaded down with, but generally speaking - an elephant runs up to 16-25 MPH. How this translates into movement rate is that an elephant would have a Move of 21, but with a skill check can manage a burst of speed that raises it to 24 (both for convenience and because of precedent, movement rates are rounded off to the nearest divisible of 3).

A horse can run up to 30 MPH; if we assume that the wagon halves their movement, that brings us down to 15. So, yes, even if the horses make their skill checks and the elephant fails its check, the elephant would still win. Of course, if the wagon was very light, this might not be the case.