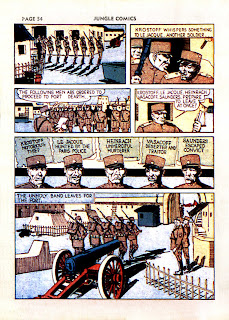 We're still looking at Captain Terry Thunder of the Congo Lancers ("Terry" has been added to the title since last issue). I like that fifth panel; in a RPG scenario, each man's secret could be shared with the player only and, although the published scenario here was all combat, in game everyone could have the secondary goal of trying to figure out everyone else's secret past through roleplaying. 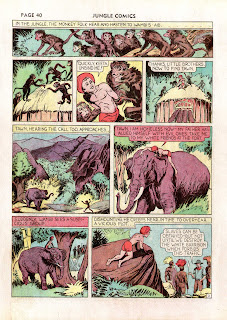 This is Wambi, the Jungle Boy. Wambi has the ability, like most jungle explorers seem to do, of summoning animals. Here, we see nine monkeys encountered at once.

Wambi, forced to choose between the people who raised him and some white guys he just met last issue, chooses to betray his own people. Okay, sure, they turn out to be slavers -- but those slavers wiped your bottom when you are a baby, kid! 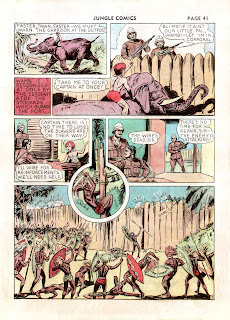 Speaking of number appearing, here we see at least 40 natives, and is probably meant to represent much more than that. 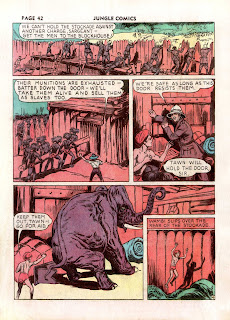 "What the devil? How did the elephant get in my blockhouse? And how is there room for him in here? Is he sitting on all my men?"

Of course, in the early days of D&D, you could put 20 orcs in a 10' x 10' room and no one batted an eye, but nowadays you should put a little more sense into spaces than that... 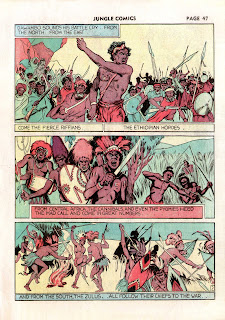 This is from Roy Lance, a feature best remembered for its good sense of geography and ethnography. The Riffians are indeed a real people, also known as Riyafa or Rwafa, and a Berber-speaking people of Northwestern Africa. Everyone has heard of Ethiopia today, but that might have been an obscure country in 1940. The Zulu are a Bantu ethnic group of Southern Africa and the largest ethnic group in South Africa. Not surprisingly, the author cannot name a real cannibal or pygmy people from Africa. 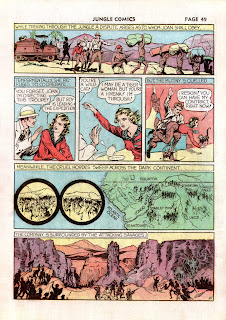 This page is all kinds of wrong -- Joan is being spanked, with a native gleefully watching, for being a free thinker and feeling like she shouldn't have to obey a man. 1940 was a tough time to be a woman.

The map is serviceable, though, with a mix of real locales, like the Congo River and Stanley Falls, with names that I can't verify are real. Twice, upon seeing Wakuna in this story, I thought "Wakanda...?" Probably not intentionally similar. 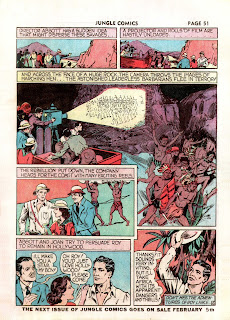 Now, seeing all the "primitives" running in fear from a film projection might seem racist to you, but bear in mind this trick also works on Scooby Doo. It just seems to be a given of the comic genre that visual and audio trickery is much more compellingly realistic than it would be in real life. So, as the Editor, keep an open mind when your players try nonsense like this. 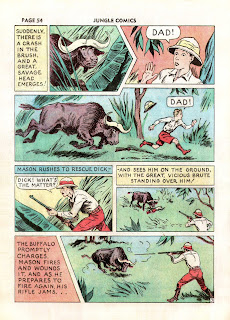 This is from Simba, King of Beasts. It takes a lot of imagination to picture a water buffalo being the deadly nemesis of a lion, but now I'm just going to have to make sure to stat water buffalo -- and make them nasty! 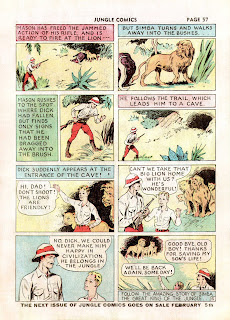 I included this page because I realized there were actually few examples I had found so far in comics of outdoor tracking. This was the primary ability of the 1st edition explorer class, but maybe that can't be justified by direct emulation after all...