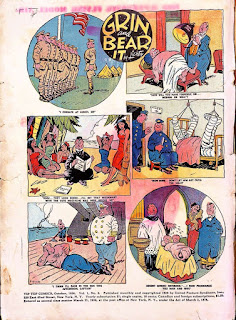 Today we're going to go way, way back to catch something we missed before -- that comicbookplus.com actually has a pretty good collection of Tip Top Comics, from United Features.  Now we're going to be taking a detour backwards for a while and catch up.

And we'll be starting all the way back to Oct. 1936 for this blast from the past (if some of this gives you deja vu, it's because most of these features were also published in Comics on Parade). And first, I'm just going to show you this page of gag filler because I think half of it (all the left half too) is really funny. 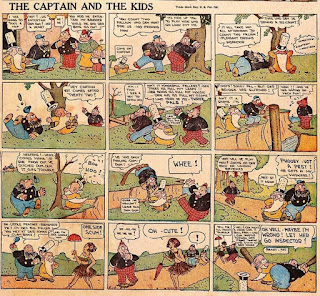 I thought I should include this because it's so hard for people today to wrap their minds around how difficult cross-country communication used to be. "Six bits" is 75 cents -- almost the cost of a meal back then -- to make one long distance phone call. 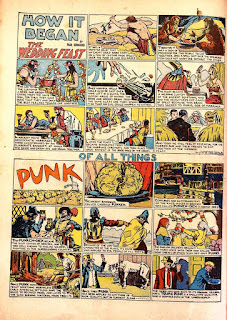 I think I've written before about using "punk" as another name for wimpy hoodlums, the mobstertype at the absolute bottom of that particular hierarchy.

But I'm interested in this notion behind wedding feasts. A spell that would allow you to control someone once you have access to their table scraps? What would you even call that? Charm through Leftovers? But it does bear more thought... 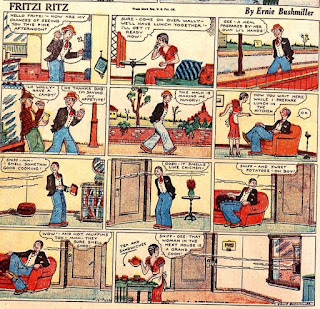 Hideouts & Hoodlums players who come from a D&D tradition often know to listen at doors, but how many of them also sniff at doors? The chances of detecting something would be the same (= basic skill check), but the question here is, should it apply to a smell check coming from two rooms away? Depending on the strength of the odor, I might upgrade it to an expert skill check, or make it ineligible for a check at all. 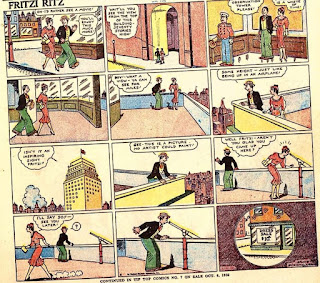 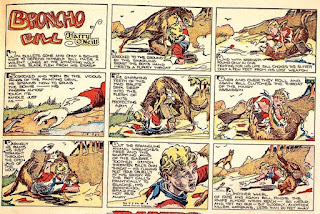 This is an interesting point. Normally, there is no restriction on movement in combat, but should that always be true while grappling? As a general rule, I like encouraging movement in combat; it keeps things interesting to not be standing in one place the whole battle. So I would say that your opponent has to have at least a partial hold on you to curtail your movement. 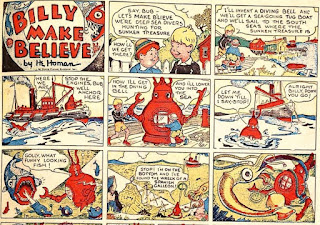 We see a surprisingly few giant squids in comic books; most artists seemed to prefer making giant octopi instead.

I really like that design of a diving bell with mechanical arms. Half-robot maybe? 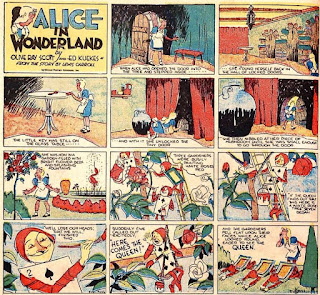 The mushroom is a Consumable of Diminution.

This also makes me want to run the classic D&D module Dungeonland, but for H&H...

(Scans courtesy of Comic Book Plus.)
Posted by Scott at 8:29 AM