We come back around to Dell as it celebrates the fourth anniversary of its very first title. With no sign of its original licensed comic strip features, like Moon Mullins, Dick Tracy, or Little Orphan Annie, we begin instead with the now-completely forgotten Captain Tornado. Although Tornado, Professor Bordani, and Jane are all stranded on an alien world, they might as well be just shrunken to insect size on Earth, because this whole feature is just an excuse to teach kids about bugs. Well, "teach" might be too strong a word for a feature that shows spiders as having only two eyes. 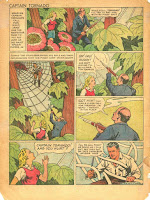 Normally people don't shoot into crowded melees in comic books, but Prof. Bordani does take time to aim first, which (at least in 1st ed. Hideouts & Hoodlums) always got you a +1 bonus to hit. 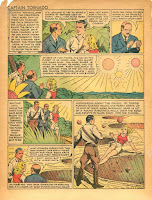 Everyone seems fine with the Professor's math, and not curious at all how the entire planet is not a barren desert, with three suns beating down on it, all at those sizes in the sky. In fact, I'm pretty sure they should be taking heat damage every turn. 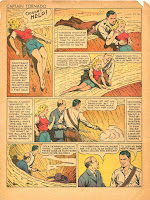 Look out, Jane! In its belly, you will find a new definition of pain and suffering as you are slowly digested over a thousand years! Oh wait, it's only a giant ant lion. I might have to include giant ant lions in the Mobster Manual now (if I ever get it done!), probably as a 4-5 HD giant animal mobstertype. It is tough, taking a bullet or two from Tornado, and then still being able to chow down on a giant bug on the following page (not shown here).

Finally giving us something besides insects, our auteur here introduces an alien bug man. Professor hypothesizes that the man has a broken wing, failing to consider that his weight might just be too much for that type of wings to support (vestigial wings, perhaps?). As a nocturnal race, unaccustomed to daylight, they would likely be -2 to hit in broad daylight.

Here we get evidence that our "wingman" (for want of a better name) comes from a civilization with at least 20th century elevator technology. 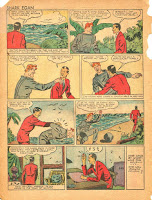 I don't have much to say about Shark Egan this month, but this page seems like a great example of grappling working the way I imagined it in the 2nd ed. H&H rules, with the attack and counterattack taking place in the same turn. 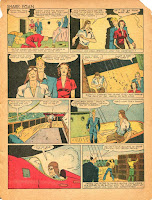 Shark seems to have no idea what Buddhists believe in and is just wildly guessing. It's okay to say you don't know, Shark! 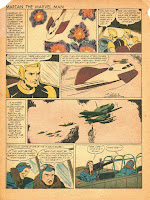 Finally, Martan the Marvel Man is still flying around Earth, talking smack about Earthlings, which I guess is only fair as we keep shooting at him and the ...invisible armor on his ship? I can't help but wonder what the point of making armor invisible is. Does Martan mean that the armor is blended seamlessly into the structure of the ship (he's now bragging about his aesthetic superiority?)? Does he mean that his ship is surrounded by an invisible forcefield? Regardless, I'm guessing his ship has a very low Armor Class and those bullets are just going to bounce off it on the next page...

(Scans courtesy of Comic Book Plus.)
Posted by Scott at 6:23 PM