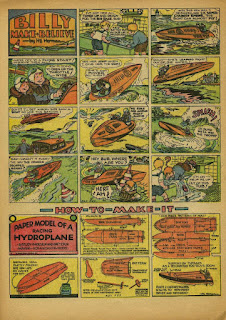 Racing hydroplanes are trophy items in Hideouts & Hoodlums, but this would have been a good illustration for one, had I seen it sooner. 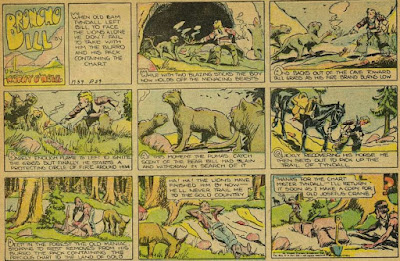 This is the second time Bill's tactics involve fire. Are you a pyro, Bill? A ring of fire could force animals to make morale saves to go through it, which would still do damage to them. 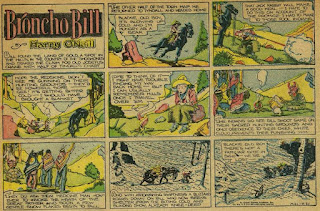 Don't mess with Indian medicine men (shamen would be the more appropriate term). Control Weather is a 7th level spell, so that magic-user is at least 13th level! Unless it was just a coincidence, of course... 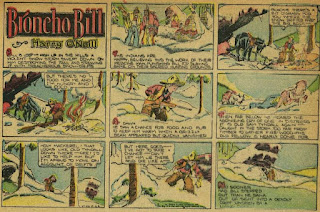 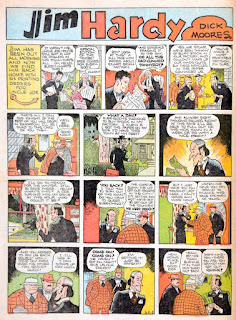 Now we're going to jump into issue #17 (Sept. 1937), and this is also the debut of Jim Hardy on this blog. Those hoodlums in the bottom right hand corner have two suggestions for good places to look for hidden treasure. The wall safe concealed behind the painting is so cliche, but buried in the shed is someplace to remember. 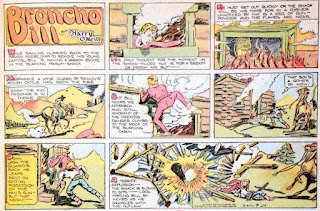 I continue to be surprised by how often cowboys climb, and it's what convinced me early on that cowboys should just be mysterymen.

Barrels of gunpowder can wreck an entire building; it looks like the truck category to me. And, yes, sometimes the Editor just has to wing which category to use for wrecking things, despite there being a fair amount of examples listed. 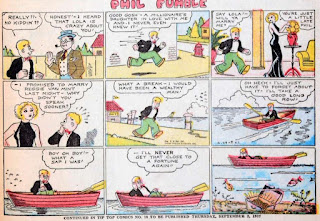 I included this strip because I wanted to highlight how, in a H&H campaign, treasure could be "buried" around you wherever you go. Not quite at Zelda-level, where you might get a gem for every blade of grass you cut, but still...it never hurts to search around. 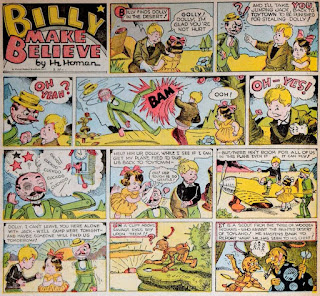 I'm intrigued by these toy people as a sort of intelligent golem (or would living statues be closer?). Billy punches one out easily, so they can't be tough, right? Only, what level would Billy be as a magic-user? 2nd level? So maybe the toy people are 1+1 HD. 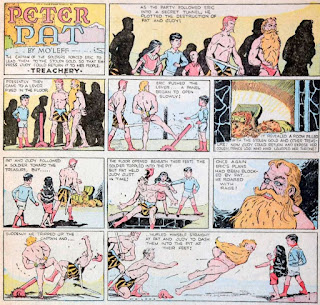 No strange monsters this time in Peter Pat, though we see our madman is so mad -- he has no clothes! We also see how treasure can be used as a lure to make Heroes move towards traps, and sometimes it pays to have a trigger -- even if it's a big obvious lever -- in the room so the trap can be activated manually. Often, it's best to let the players' curiosity get the better of them and have them activate the traps themselves!

(Scans courtesy of Comic Book Plus.)
Posted by Scott at 12:07 PM