We're back with Martan today. He's flying around, judging Earth pilots as they shoot at him, and -- what? Isn't he flying a spaceship? How does he lean his arm out the window?? Did he actually roll down the window, like in a car?

I like the dialogue on that one pilot. I don't think he's using "smack" as a noun, but I can't wait to use that line in a game someday -- "I'm ready to pour 'six rounds of heavy caliber smack into him'!" 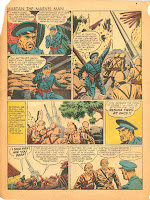 Interesting -- Martan is obviously attacking them with a raygun, but it's so rare for a ray to be invisible in comic books. The effect of the ray is specifically to lock up all mechanisms -- but this is effectively the same as temporarily wrecking things. 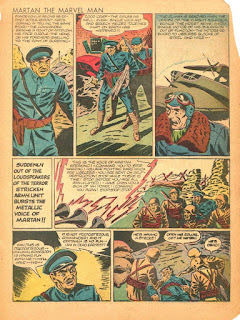 What we don't get a good idea of is what the area of effect is for this ray; we can tell it's wide, but it does have its limits (as Martan discusses shortly after this page).

Another feature of Martan's ship is that it can broadcast his voice through any electronic device, like these loudspeakers, with a range as great as the raygun.

The story takes as a dark turn, as the commander is so shocked that he has a stroke and dies on the spot. That is one failed morale save (on my chart, the worst result is fainting!)! 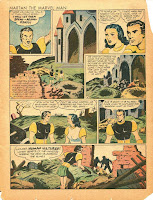 "Fata Morgana" is the Italian name for Megan le Fay. Martan's power seems to be the first instance of postcognition in comics (new super power!). Martan is able to create an image of what the building used to look like that both he and Vana can see (but not for long). It's unclear how long ago the church was ruined; perhaps postcognition can only reach back a few days in time. 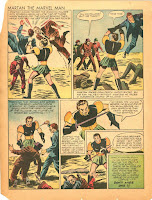 Martan has no compulsion against killing humans (humans are still beneath him; an easy position for an alien to take).

Weird that the shadowy figures are armed with only swords and daggers. I actually did stat shadowy figures as a mobstertype back in Supplement V (and will likely include them in the Mobster Manual). 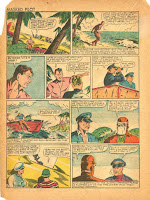 Radios being broken seems a not uncommon complication of airplane crash landings.

Being marooned on a deserted island is a great H&H scenario, as it tests the Heroes' ability to problem solve without the use of most of their special abilities.

The Masked Pilot should be very suspicious of the captain's lack of suspicion, particularly in regards to the Masked Pilot's mask. 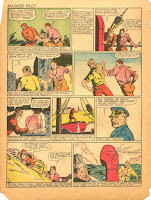 Treasure placement can include weapon placement and always needs lots of thought, as two fully loaded automatics is not what I would expect to have found in a radio room.

Things continue to escalate once the grenades come out! This kind of escalation of threat level happens all the time in game play, with the same risk of weapons falling into the Heroes' hands.

In Gang Busters, we see how a skill check for even driving can be critical in a scenario, as a failed check would send them over the cliff, or stopped before the parked car.

(Scans courtesy of Comic Book Plus.)
Posted by Scott at 8:40 PM