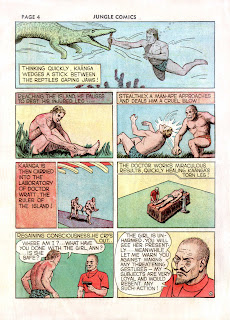 Jungle Comics is what happens when a publisher (Fiction House) has one successful title (Jumbo Comics, packaged by the famous Eisner-Iger studio) and decides to launch another, but on the cheap. When Fletcher Hanks is your best artist (and you'll be seeing his contribution in a day or two)...

I was recently in a Q&A with Don McGregor on Facebook and I asked him about pushing the envelope for violence in comics. His response was that he wasn't trying to push violence so much as show that violence has consequences. Which is relevant here because violence is on display on practically every page of Jungle Comics, but a strangely bloodless violence, even when characters are getting stabbed in the face. I found some of these images too unpleasant for sharing on my blog, so you'll just have to take my word on the face-stabbing incident. 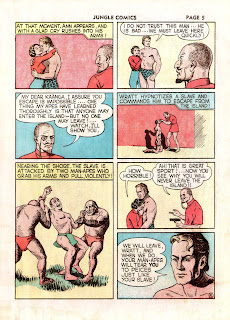 Kaanga is drawn by Ken Jackson -- often free of the constraints of any backgrounds -- and so stiffly that he can sometimes be mistaken for Fletcher Hanks (in fact, I'm not entirely convinced that Jackson isn't just a pen name for Fletcher, with someone else inking over him).

Compared to Kaanga, Arthur Peddy's work on Red Panther is positively dynamic, though still gory. Later, Arthur will join DC Comics and get to work on the squeaky clean later appearances of the Justice Society of America.

Now, let's talk about the pages! In the first one above, we get possibly the first instance of a stick holding crocodile jaws open in comic books. At least he doesn't kill it!

Ape men often look -- or are blatantly -- racist in nature, but this story skirts that problem by depicting the ape-men as white as they can get. Dr. Wratt may be the first mad scientist in comics who won't wear pants. Or shoes. Or socks. I think we can safely assume he's naked under that long shirt. Dr. Wratt may be evil, but he's not too evil; he operates on Kaanga using an anesthetic gas. 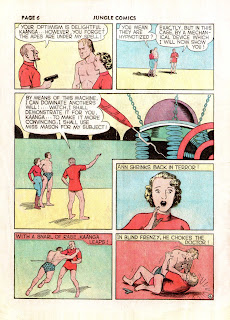 Game mechanic notes: Sticking a stick in a crocodile/aligator's mouth requires a successful attack roll, followed by a failed save vs. science for the animal. The ape man achieves a surprise attack and lands a head blow that stuns -- unless Kaanga was just low on hit points from the crocodile fight, in which case Kaanga has been rendered unconscious at zero hit points."Torn legs" do not require miraculous cures in Hideouts & Hoodlums, just normal rest.

Wratt needs to only establish eye contact with his victim to hypnotize him, but we've had plenty of evidence of how easy it is to hypnotize people in comic books. He does have one limitation, though, he can only hypnotize someone to make them do something they already want to do (like escape the island). To "dominate another's will" he needs that big, stationary machine. 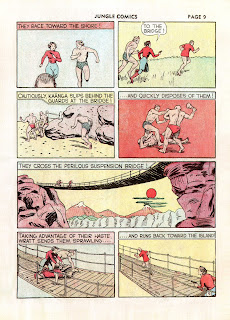 It's unclear if the machine does all the work, or if it only makes his normal hypnotism more effective.

A choke hold is a result on the grappling table in 2nd edition H&H.

Here is a very rare example of tripping two opponents at the same time.

Wait a minute...if the shore was that far from his lab, how did they see the hypnotized guy get torn apart when he "neared" the shore? 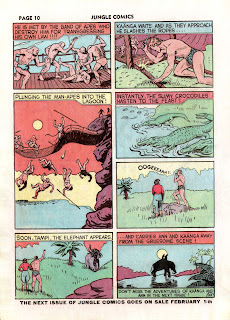 The island is in the middle of a lake (I didn't share the page that established that); the long suspension bridge is the only way to the shore of the lake. But couldn't Kaanga swim the lake...?

We see ape men can be encountered in groups as large as eight.

Are the crocodiles in the lake, a lagoon, or both? 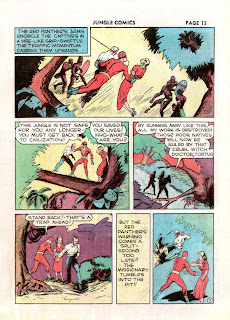 Meanwhile, Red Panther is trying to save missionaries from headhunters.

A stunt never seen before, or likely since, in comic books, is swinging from a vine held in one's teeth and scooping up two full-grown people, one in each arm. I have toyed with the notion of restoring the multiple levels to stunts that they had in 1st ed. But how to distinguish 2nd level stunts from 1st edition ones? A thought I've had here is that a stunt should only be able to accomplish one thing, but a 2nd level stunt can accomplish multiple things (2? 3?) at once.

A skill check can discover a hidden trap if the Hero is actively searching for them, though Red Panther seems to just happen to spot one here as if by accident. 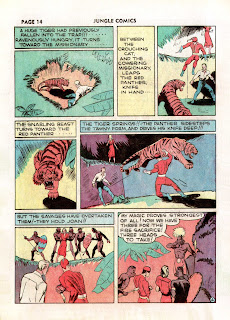 A long established practice in RPGs is to combine traps with something to fight, such as a tiger in a pit trap.

It seems odd that Red Panther chooses to jump into the pit and kill the tiger, rather than simply reach into the pit and pull the man out. He could have even helped the tiger out and sicced it on the headhunters. 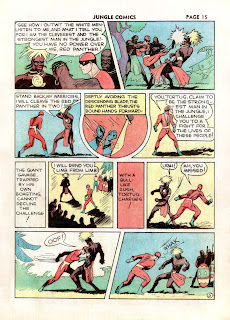 Red Panther is able to use a stunt -- cutting his bonds against the sword -- even though combat has already started because he has not yet taken a combat action.

This is not the first time the term "giant" has been used to apply to a combatant who is actually just normal-sized. This is why I was thinking of creating a pseudo-giant mobstertype. 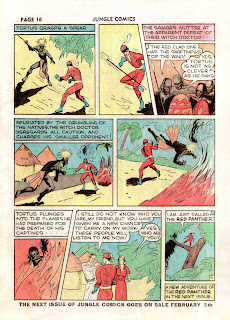 A push attack does not need to be away from you; here it shows a push attack being used to move an opponent behind you.