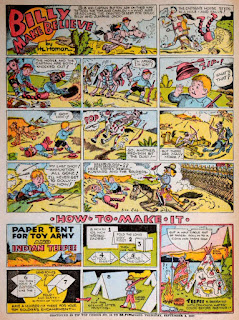 Also known as vol. 2, no. 5, 8, and 10. Outside of Tarzan, the strip I can't see because of strict copyright laws, the race for second-best ongoing story line is a contest between Billy Make Believe and Peter Pat. Like The Adventures of Patsy, these were parts of a minor and unsuccessful movement to merge the kids' adventure and fantasy genres. Both Billy and Peter have exciting adventures and reveal themselves to be capable fighters despite being half-pints, though Billy's seem less dangerous, as it is not clear whether his adventures are actually taking place or are only imagined by him, as the title suggests.

I include this page's How to Make It sub-feature because, of all the mini-craft projects I've seen described in filler material so far, that one about making paper tepees is the only one I've actually done. 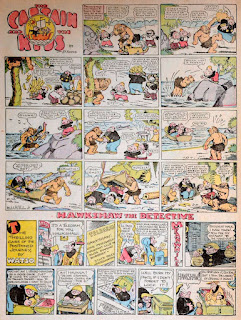 Billy is still fighting toy people (and contributing to racism?). It looks like toy people can be encountered in groups up to 30, and do not have to be human-like in form.

Captain and the Kids gives us wild men, another name for cave men, and reminds us how strong they are. Maybe all cave men should have the Raise Car power?

The reference to state police in Hawkshaw the Detective suggests that, despite being based on Sherlock Holmes, this takes place in the U.S. 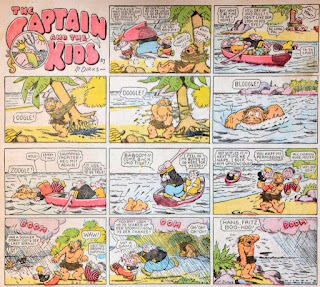 Here's an issue we've discussed here before: when do powers/spells/stunts need to be activated? Does the wild man need to have used the Raise Car power to lift that tree out of the ground, or is simply flavor text accompanying the attempt to wreck the rope? It may depend on what comes next. If the wild man simply escapes the tree and ignores it afterwards, the Editor can rule that the tree was lifted out as just flavor text, as it has no bearing on the story. If, however, the wild man tried to pick up the tree and use it as a giant club, then the Editor should rule that a power needed to be used, even if he has to retroactively make that ruling. 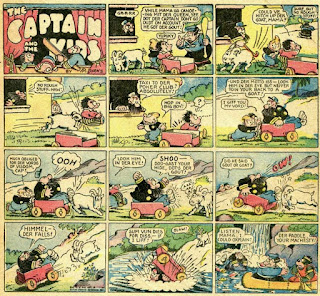 This really takes me back to the early days of the blog when I used to keep a running tally of how many goats appeared in the comics. It's true, before there were supervillains, goats seemed to be the supervillains of comic books.

Here we see how little provocation goats need before attacking. 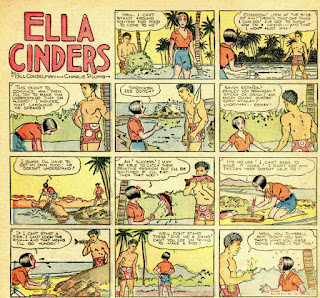 Ella Cinders addresses the issue of language. It's been a Hideouts & Hoodlums rule since the beginning that languages aren't important and all characters speak the same one. Ella Cinders makes it clear (or even more clear, we just assumed so before) that the language we all speak is English. 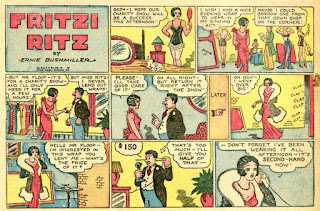 In a more capable artist's hands that first panel of Fritzi Ritz could have been downright scandalous. But I include this strip not to titillate you, but to point out that fur wraps cost $150 and that, if you're going to haggle, maybe you should wait longer before suggesting furs depreciate in value. 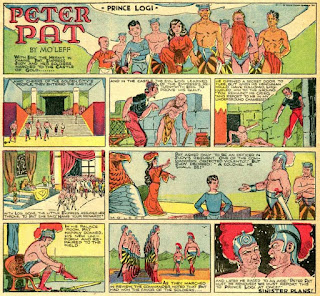 Peter Pat's first big adventure has been wrapped up and he's returning the princess to claim his reward -- and is seemingly very well rewarded too. Peter should be at around 3,000 XP right now, which means his title should be an officer, but colonel seems really high... 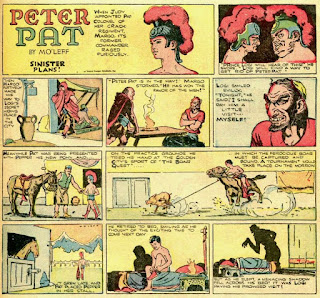 ...but then, it depends on the perks that come with it. Peter, after all, won't be commanding large armies or have access to heavy artillery -- it looks like he gets a fancy helmet and a pony, and the chance to perform in the rodeo.

This page also reminds us that, when developing alien cultures on the fly, all you really need to do is swap out one detail, like pigs for horses at the rodeo.

And we'll wrap up for today on this first share from issue # "22" and Hawkshaw the Detective. It's a rare, early occurrence of bad guys using passwords or phrases to get into their hideouts.

A question to ponder, that I'm not sure how to answer yet: when Heroes are on a stakeout, should they make a save vs. plot or science to determine if they sneeze...?

(Scans courtesy of Comic Book Plus.)
Posted by Scott at 3:39 PM