Wow, it's been so long, I finished and published the HIDEOUTS & HOODLUMS Basic Book 2nd Edition between posts!

I love how the Scientective uses science for problem-solving. Here, he realizes that something in the room with him can dissolve the material binding his wrists. Of course, a smart Editor anticipates things like this and stocks his hideouts accordingly.

"Rheostat" is a word that's fallen out of common usage. It means an adjustable resistor so constructed that its resistance may be changed without opening the circuit in which it is connected, thereby controlling the current in the circuit.  Of course, John could have just said "This switch ought to shut off the power," but that wouldn't sound very Science-y! 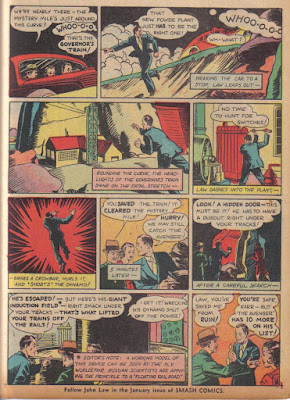 With little time to spare, John Law has to start playing hunches. His first hunch is that the brand new power plant right by the tracks can't be a coincidence, just like every reader was probably thinking on the first page.

John is able to smash the generator easily despite not being a superhero (and wouldn't he be in trouble if his hunch had been wrong!). I did include a note in the scientist entry in the mobsters section of the H&H 2nd ed. basic rulebook that scientists can all wreck labs -- but John is a Hero, not a mobster. For now, this will just have to fall outside the game mechanics...until the scientist class comes back in the Advanced Hideouts & Hoodlums Heroes Handbook someday...

There's a very curious editor's note about a giant induction field displayed at the New York World's Fair. I have not been able to find evidence of this, unless the editor is referring to the automated highway system demonstrated in the Futurama exhibit. I can find no evidence that Russian scientists were ever working on a "floating railroad." Could the author have read something about the electrification of the Russian railway system and misunderstood...?

This is from Wings Wendall and what makes me stop and pause is...what did that officer look up commercial airplane listings in?  Trade journals? Records of the Civil Aeronautics Authority? If Wings is flying with the U.S. Army Air Corps, how do they have these civilian records close at hand?

I like to think these hoodlums are just sitting there in warehouse drinking and planning because they're drunken hoodlums. 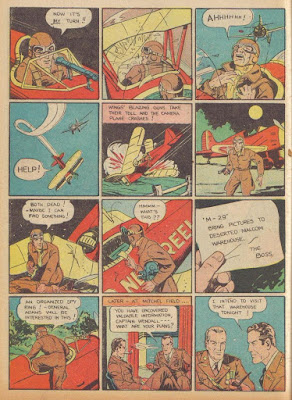 I've waffled for a long time now on how vehicular combat should go in Hideouts & Hoodlums. Do weapons trigger a chance of complications, like crashing? Or should it, like man-to-man combat, be a incremental process of hit point loss? The wording of "guns take their toll" suggests to me the latter, as the abstract, cumulative damage -- not any one hit on any one part -- is what causes the crash. But I've so far seen evidence in the comics that support both ways.

The idea that the Boss left such a simple note for Agent M-29 on a scrap of paper, rather than expecting him to commit a single sentence to memory, is an obviously planted clue. But planted for a trap, or by an Editor who really wants his player to get to that warehouse?

It's also worth noting that Wings doesn't head straight to the warehouse, but reports his intention to his superior officer first. That's a very Lawful way to play.

Why is one window locked and another window left open? It could be saves vs. plot, or it could be a simple 1-3 yes/4-6 no roll. The first option makes Heroes luckier as they advance in level, while the second option keeps circumstances at an even random chance.

We also see Wings being surprised. Fresh arrivals to an ongoing combat still get a chance at surprise. 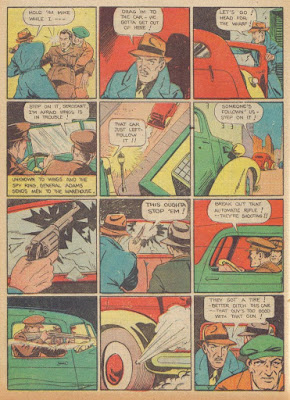 Wings is attacked here by gangsters, a new mobster type with a special ability of getting victims into cars.

Although players should have some control over their supporting cast, they cannot just arbitrarily declare that their SCMs show up when the Hero is in trouble. The players can suggest that SCMs show up, and the Editor can decide if he should say yes or no, or give them a save vs. plot to see if it happens.

This sequence reminded me, while preparing the chase rules for 2nd edition, that I needed to include a missile combat phase during the chase turn!

I think I missed this, though -- when I compiled a list of abstract complications that could happen during a chase, I may have missed the slowing complication, like a flat tire. I'll have to double check...

Wings recovers quickly because of the new rule in 2nd ed. that allows unconscious Heroes a save vs. plot to recover in 1-6 turns. Because he's still in danger, turns are still being counted in half minutes.

The "boss" is either a master criminal or, if the spy class was in use, a higher level spy.

This is Invisible Justice. Thurston is driven off the road during a car chase (the complication is crash, but because there's water nearby to crash into, Thurston only loses the car and takes no damage).

Here's a precedent for invisibility, at least granted by trophy items, not turning items touched invisible.

Old mansions, on the only estates for miles around, make great hideouts (plus, its fairly easy to find a map of a generic mansion you can use for your game on short notice).

Large patio doors without closed drapes make a great way to spy on the hideouts' occupants before going in.