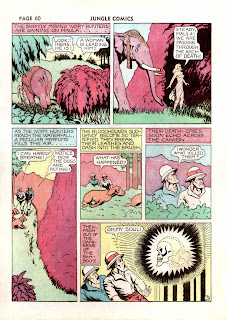 I don't think it's right to move on from Jungle Comics without addressing its last and weirdest feature, Fletcher Hanks' Fantomah. While Tabu had already passed into other hands, and the splash page of this story (not shared here) looks like it's by a different artist, Fletcher was still allowed to work his wonky magic on the rest of this story. It interestingly bookends the Tabu story of this same issue, by both being about elephant graveyards. Note the difference between R.L. Golden's technically more proficient drawing of an elephant's graveyard, but with much less ivory, and Hanks' drawing below where the graveyard is awash in a sea of ivory.

Here we also get a sense that Fantomah is some sort of angel for animals, delivering them peacefully to their afterlife. She takes no direct action against the evil humans, but observes the cosmic justice. Well, she might have helped goad them towards cosmic justice, by sealing them in the graveyard... 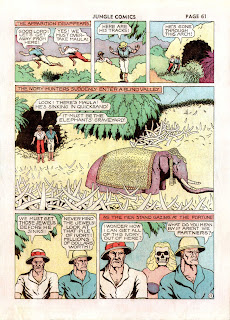 Perhaps the most bizarre part -- in a strip overflowing with bizarreness -- is the curious incident of the death cries of the dogs. The narration describes the dogs are running away from the arch, the direction that Fantomah wants them to go, so it seems unlikely that she did it. Is it just coincidence? Do they meet a jungle predator off-panel? Is the noise just illusory, made by Fantomah to spook the men?

Game notes: $1 million in ivory is going to create transportation issues, no matter how loosely the Editor enforces encumbrance rules (which are pretty lax in Hideouts & Hoodlums to start with!).

Fantomah's sudden appearance in panel 6 might stem from ending an Invisibility spell on herself. Her ability to transform 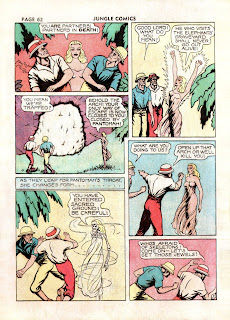 from flesh to skeleton and back is likely just a Phantasmal Image spell. Blocking off the arch is a much more impressive spell, though -- Wall of Stone (unless she used the lesser spell Stone Shape to make the walls swell and bulge inwardly?).

(Scans courtesy of Digital Comic Museum.)
Posted by Scott at 7:41 AM