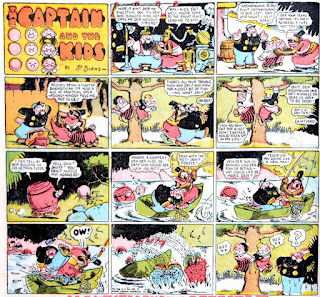 And we'll start with The Captain and the Kids, one of, if not the oldest, comic strip to be republished in comic book form, having begun back in 1914 (though called Hans und Fritz until 1918). For such a superficially Germanic feature, it's odd how long the strip was based in various parts of Africa.

Game notes: Well...um...still trying to wrap my head around gluing pants to a tree. Would it really be easier to climb out of the pants rather than rip the pants? Climbing out of your pants is normally too easy to roll for, but under these 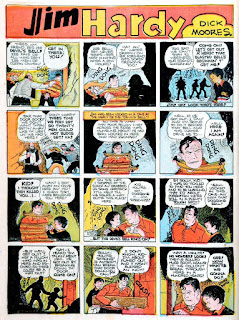 conditions, I would treat it as an expert skill check just to not tear them accidentally. And wrecking a pair of pants would be much easier than wrecking a door -- same mechanic, but with a +1 or +2 bonus.

Then there's the other issue of running with a barrel over your head and not falling over. Save vs. science to keep your balance? But how often to force rolls? I guess that depends on terrain - maybe once every 360' on level terrain, but every 180' on lightly wooded, flat terrain?

On to Jim Hardy. I'm not interesting in game mechanics for torture, as I've said here before, but I share this page because of the efforts to use a tool to break down the door, which begs the question, should that plank of wood give him some kind of bonus? If Jim had a big sledge hammer in his hands, I'd consider a +1, but awkwardly hitting the door with a wooden 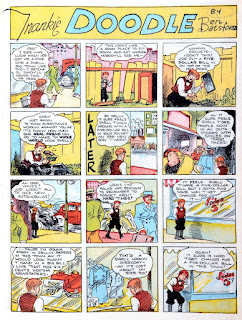 plank in his hands? I think he's more likely to give himself a splinter than to knock that door down.

In the debut of Frankie Doodle on this blog, we see some new prices -- 98 cents for boys sweaters (gosh!), boys overcoats for ...is that $4.98? And, of course, the joke is that Frankie fails to see sodas are 5 cents.

Chris Crusty learns the advantage - and disadvantage - of wearing a fake deputy badge. I suspect Heroes would not object to this disadvantage, though, and would welcome the chance for danger that it brings. Lawful Heroes would need to save vs. plot to carry badges they know are phonies. 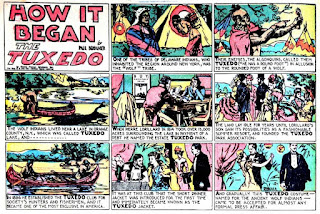 No real game content here, but I never knew the origin of the word tuxedo before. Remarkable!


And now, we return to Peter Pat, which I had initially enjoyed for its dramatic story, but it really strains credulity for the amount of stuff this little boy can do. I mean, he's like an Olympic-level athlete sometimes. 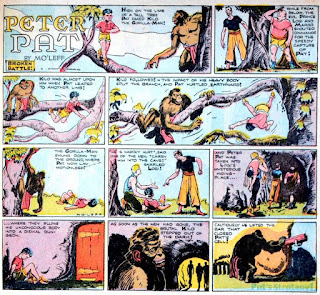 Here we have a different kind of ape man. Usually, ape men are just men drawn to look more like apes, and is sometimes dangerously close to just looking like a racist caricature. This ape man is most definitely a gorilla, yet one with human intelligence (and modesty).

We know Peter was at least 10' high in the tree, because you need to fall at least 10' to take falling damage. 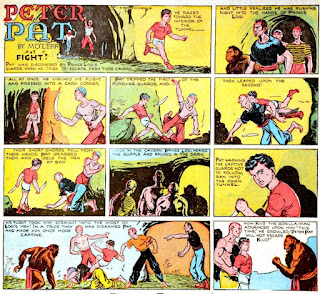 Here, our little Olympian uses a trip attack, and then gets tripped, all on the same page, making this the first time I've seen tripping happen twice in the same combat.

Peter also establishes that you can pick up two dropped items in the same melee turn.

And we learn this ape man can talk! 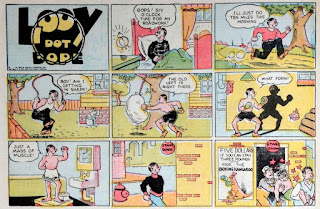 I shared this page because boxing a kangaroo for $5 seems like it would be a fun first scenario for 1st-level Heroes, and give them a good sense for how vulnerable they are at the beginning of their careers. 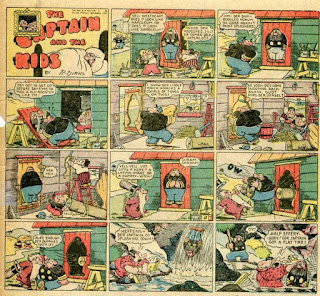 I have room enough for one page from the next issue I have access to, and it brings us back around to The Captain and the Kids again, this time giving me two ideas for a trap. One is, someone opens the door, and the log swings down and hits the person in the doorway. The other idea -- and it's more in line with what you see in this page -- is that the log swings down, hits a cutout in the door, and the cutout comes out and strikes the person in front of the door. The first version could do a lot of damage, depending on how heavy the log is. The second version would do less damage, as a lot of kinetic energy would get lost in the transference to the cutout, and I'd have that do maybe 1-4 points of damage.

(Scans courtesy of Comic Book Plus.)
Posted by Scott at 8:33 AM