Dr. Fung finds it extra hard to find the trickster Scorpio (the trickster class, designed for mediums and psychics, debuted in The Trophy Case v. 1 #4) in his weirdly-shaped mansion. The first room is concealed behind curtains, but behind the room is a secret door keeping the blackmail files safe. The Editor can double up on tricks and traps as well if it keeps the hideouts challenging.

Weapons concealed in canes are so cliche that they'll never fool your players, but a spring-loaded arrow-launcher concealed in a magician's wand? That's a trophy item that will surprise them (though I question the penetrating power of such a weapon -- maybe it would only do 1-4 points of damage?).

Tex Maxon is good in a fight, but not as good as Timmons!  Check out how he kicks a rock with the back of his foot and manages to get enough lift to strike Tex in the head. I'm not sure even professional soccer players could pull off that stunt. It certainly makes me question if Hideouts & Hoodlums needs any facing rules.

It is not unfeasible for someone to fall 150' and survive, as there have been lots of examples of people falling even further and living. The H&H rules are unforgiving , with a fall from that height doing 15-90 points of damage. Now, it's possible that Jon Pulski had 16 hit points and got really lucky, or the Editor set a lower minimum damage (which he could always do, at his discretion).

Fake skulls seems like it could be interesting hideout dressing.

This is K-51, though the influence of Will Eisner makes it seem an awful lot like a Black X story. This takes place in the Philippines, which was an U.S. territory at the time. The rabble-rouser Mussoni is obviously based on Mussolini, though what he'd be doing in the Philippines isn't clear.

Notice how, in fiction, no one ever gets stabbed during a grappling fight. This is borne out in the 2nd edition grappling rules, where if you grapple someone, that opponent can't make any attack back at you that turn except for grappling.

The typhoon is either a wandering event or something the Editor just tossed in, at his discretion, to shake up the plot (it had been a standoff before this). The typhoon is strong and wrecks as if a high-level superhero. X-51 and his fellow agent Claire (she does have a codename, but it's not used past the first page) both make their saving throws vs. science (or maybe plot, or whichever was worse?) to survive the storm, with the Editor rolling for the major antagonists on the ship, while likely hand-waving the rest of the rolls and just saying the crew all died.

The bad guy here is called both a bandit and a robber, but by the way he gets from the side door of the train to the ropes hanging above the train, he must be a mysteryman.

The "chief" is a master criminal; you can tell he is by the bald head. A thug (another mobster type) robs the train this time, using less acrobatics.

The car is full of a mixture of gangsters and thugs. One of the thugs recovers quickly, having made his save vs. plot to recover quickly from unconsciousness (a new 2nd ed. rule). This indicates that even small-fry mobsters are eligible for the recovery rule...though, if there was no such rule, this could perhaps be explained away as a special ability of the thug mobster-type. 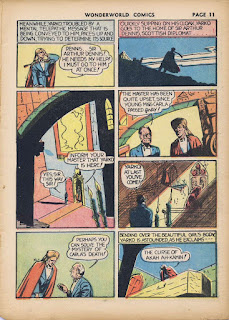 It seems that Yarko the Great has cast two spells here; the first seems to be a Telepathy spell, allowing two people to contact each other over distances, and the second seems like a Read Curse spell, that allows him to identity the curse on the dead woman.

I am going to do some limb-climbing, though, and suggest that we don't really need either new spell. We can assign "curse identifying" to Detect Magic. And the telepathy used here could have been as easily accomplished using two telephones, so I suggest that this instance of telepathy could be flavor text, created at the Editor's discretion, to get the plot rolling. Now, does this set a precedent for Yarko being able to use telepathy in the future? Not necessarily, particularly in a game system where powers and spells are chosen from day to day and not set in stone. And comic books themselves were always being inconsistent.

I ran a scenario in my JSA campaign based on this story (the Atom was killed by a cursed item, but the Spectre got them permission to go to the Valley of Death and retrieve his soul), so I'm particularly excited to get to it on the blog finally.

Here we see Yarko laying down some powerful spells, starting with Teleport and ending with Planar Shift. In the middle, he seems to rely on Enlargement for the intimidation factor. It's unclear if Yarko is commanding her with just the force of his words, or with a Charm Person spell.

For the boatman, I planned to use the stats of a Charonadaemon from the old Monster Manual II (luckily the JSA didn't choose to fight him). The little flying creatures over the river I statted as spined devils and vargouilles from the same book. I had to do this appropriation because I had not created anything too close to these yet in Hideouts & Hoodlums and, since they don't actually do anything in the story, I would have had to make stuff up from scratch anyway.

The JSA managed to avoid Fear by slaying Burning Pain with missile weapons and not exploring the ledge where Pain was. Fear I had planned to stat at the time as an apparition from the Fiend Folio, but in 2nd ed. H&H, I plan to have a new undead mobster type called the spectral killer.

Horror was evaded the same way. Because of the wailing shriek, I planned to stat Horror as a banshee/groaning spirit.

I skipped this scene, replacing it with The Atom and some other souls being found on a beach, guarded by an angel/deva that had to be persuaded to let him go. I was fearful of the players choosing to run down the hall of time and all de-aging themselves into babies, or encountering Death, choosing to fight him, and wind up getting all killed.

Why isn't Yarko de-aged? I guess he made his saving throw.

Will Eisner's moral lesson about vanity makes this heavy stuff for a 1939 comic book. 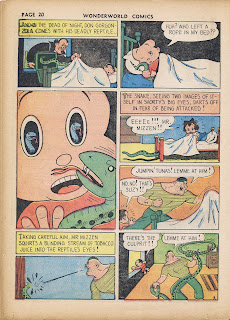 And then, on the opposite side of heavy, we have Shorty Shortcake. The poisonous snake in the bed was already an old enough cliche by 1939 to poke fun at it here.

Shorty is right on the border, with Seaweed Sam and Archie O'Toole, between being too ridiculous to consider running a H&H game based on it, but having just enough interesting ideas in it to make it impossible to ignore. Should snakes have to make morale saves if they see two reflections? Nope. Should people be able to tie snakes into lassos? Probably not. Should sailors be able to make blinding spit attacks with chewing tobacco? That's just interesting and plausible enough to consider -- and would be a special attack that makes a sailor mobster type more interesting.

But Mr. Mizzen is no ordinary sailor-mobster; he must be of the superhero class. Here he demonstrates nigh-invulnerable skin and, if the fourth panel can be taken seriously, the high-level power Super Punch. Mizzen must be high enough in level that the 20 to 1 odds by the end of page must not be too great (and I would probably have a superhero be at least 4th level, a remarkable man, before taking on odds like that alone).

Okay, if you ignore the overpowered notion of being able to punch people forward through time, and the subtle racism suggesting all Latinos are lazy, panel 3 suggests that the superhero class should have some disadvantage to it (like powers only being able to work in the morning). Right now, in second edition, disadvantages are only tied to race -- the thinking being that classes already have a balancing mechanism tied to experience point progression, and the only real unbalancing danger is when you combine the alien race and the superhero class together.