We're now up to the third of the MLJ titles and still about two years away from their superhero zenith. 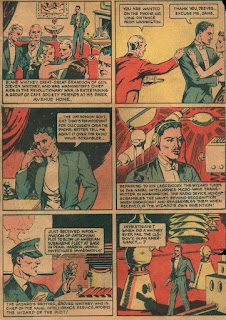 Here we get the first of their superheroes, The Wizard. He's not a magic-user wizard, but a hi-tech wizard. We'll observe him carefully and see what class he best fits shortly.

First a historical note -- there was no historical General Steven Whitney in the Revolutionary War. The actual Chief of the Naval Intelligence Service in late 1939 was Vice-Admiral John Godfrey, not Grover Whitney.

Telephone scrambling was already in development in 1939, but was not practical until 1943.

Somewhat famously, Pearl Harbor would be later attacked almost exactly as it's laid out in this issue.

The Wizard is one of the earliest characters we can pin down to an exact age, having been born in 1904. It was certainly not uncommon for comic book heroes to be grown men in their 30s.

The phone scrambling computer must be a trophy item, but we can't be as sure about this steel-burning chemical. Hi-tech potion -- or wrecking things power?

Woodrow Wilson is the first historically real character in this story, as well as this being the first time President Wilson had ever appeared in a comic book.

That's some mystery chemical -- even in 2017 we don't have a chemical that will burn 1,000 times hotter than acetylene.

The Wizard's invisible car, occurring in flashback, makes it chronologically older than the Ultra-Humanite's invisible car in Action Comics #13. An invisibility field generator that can fit in a car was a trophy item since first edition.

That The Wizard's prop plane can go from New York to Los Angeles in 2 hours and 45 minutes is suspicious -- even today the flight takes almost twice that long. Despite appearing to be a prop plane, it must be a jet.

Now here's where we start to get into guessing what class The Wizard is. First, he appears to be using magic -- maybe some powerful divination spell -- to figure out both what his objective is and where to find it. Then he dresses like a Mysteryman. Then he tears fish nets apart with his bare hands -- strong, but not quite wrecking things strong; a Mysteryman could accomplish this with a stunt.

But, here, we see The Wizard using Leap, he leaps unharmed through gunfire as if buffed with Nigh-Invulnerable Skin, and it sure looks like he's using wrecking things on that submarine portal. Further, his high velocity propulsion pistol could be another hi-tech trophy item, or it could be flavor text for one of the Blast powers.

It's also curious just what a high velocity propulsion pistol is. Just about any gun works by propelling ammunition at high velocity. If there is no ammunition, it sounds like an air gun.

Here, again, is the Wizard wrecking his way through that door or using an actual vial of some sort of super-acid?

So, in just his first story, we've already seen what appears to be three different classes represented -- basically, all the core classes other than Fighter (unless the 3rd panel of that previous page counts as that too!).

I'm wondering if I should develop a sort of "bard" class for H&H...a jack of all trades class that can switch back and forth between classes, possibly from turn to turn...

Freckles and His Friends deals with an unusual trophy item of questionable keep-ability -- seal pelts. There are $5,000 worth of seal pelts in this boat, though we don't know how much that comes to per pelt. We do know they bought a used boat for $75, but found it a good enough value to be suspicious.

Clyde Beatty, Daredevil Lion and Tiger Trainer encounters a very well-guarded trophy item -- gold chains, with a lion attached to them. In the story the lion is what they consider the trophy, though I imagine most players would prefer the gold chains.

Myra North, Special Nurse is not actively looking for Supporting Cast Members, but after healing Captain Weaver, it's only natural to make a recruitment roll for her. SCM recruitment can be initiated by the player or the Editor.

The lair of The Spider is a fortress-like villa in Mexico. We see a fence around the yard and a roof defended by three guards armed with an anti-aircraft gun.

Again, we see evidence of complications in vehicular combat (plane stalled) instead of hit point loss (or an equivalent mechanic). We also see the stunt Deadstick.

Whew! I've been getting so much Hideouts & Hoodlums stuff done, I haven't had time for this blog! 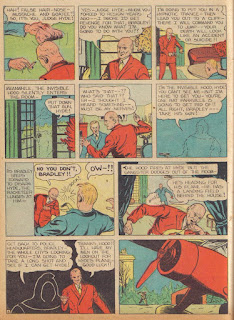 When I last left off, I was looking at the Invisible Justice story from this issue. I've already talked plenty about how easy disguise and hypnotism skills are in comics, so this whole first row should come as no surprise. No, what I'm interested in here is that Invisible Hood has to still sneak silently into the room -- invisibility does not itself guarantee surprise conditions -- and the fact that Invisible Hood was willing to shoot Hyde in the back as he was running away.

When I talk to people about H&H and golden age comic books, more than once I've been asked about how the game handles the perceived notion that all the Heroes of the Golden Age were goody two-shoes. Invisible Hood just tried to shoot the bad guy in the back.

This is from Abdul the Arab, and game mechanics-wise this is more complicated than it may at first appear. Abdul encounters a lone man wandering the desert and rides out of his way to aid him; the man turns out to be an ex-member of the mobsters Abdul didn't even know he was after. So what did Abdul just encounter -- a random good deed that rewarded him with a plot hook character, or a random plot hook character Abdul mistook for a random good deed? Only the Editor knows what he rolled for...

Sand pits are a good desert trap -- but not when they conveniently lead to the exact room in the mobsters' hideout you need to reach.

The bad guy is consistently referred to as a brigand here, a mobster type present since the beginning in H&H.  There is no game mechanic reason for the brigand's horse to stumble; it seems like a creative explanation of a missed attack roll.

This is Captain Cook of Scotland Yard, and one clue that this is meant to be a short, one-night scenario is that it starts at the entrance to the hideout (a freighter in this case) and he's already been given his mission.

The fact that this is a low-level scenario is evident by the single guard, armed only with a throwing knife. The guard misses, despite having bonuses for attacking from behind and above.

Linen is a good random thing to find in a hideout.

What the heck kind of map of England is that?

A clipped newspaper article is a cliched clue; making the clue an obituary of the guy who's office you're in gives the clue a creepy twist.

I can easily accept that Cook found the warehouse's address while in the company's main office. He could have even looked up the address in a phone book. But the warehouse address is on the company stationery's letterhead?  Instead of the corporate office address?

Though I've been riding this story pretty hard, this last wrinkle -- about the secret gas solidified into powder and sprayed onto the linens that have been out in plain sight all this time -- is a pretty good wrinkle. It could also make a pretty good trap. "This room's full of nothing but worthless linen; I'm burning it." BOOM!

Hugh Hazzard and His Iron Man would have me believe that large robots are worth $5 million. Nooo, I'm not putting something that valuable in my hideouts!

It's odd that Bozo is immune to the death ray, since it very easily wrecks the plane it strikes first. Bozo is clearly no ordinary robot, but one statted with levels in the superhero class. But no power of a superhero buffs you to be immune to rayguns (yet). Could this be as simple as a successful saving throw?