Still reviewing Tip Top Comics #10, from Feb. 1937. It is packed with United Features' also-ran comic strips -- though, to be fair, it was headlined by L'il Abner and Hal Foster's gorgeous Tarzan, but I just don't have access to those pages. 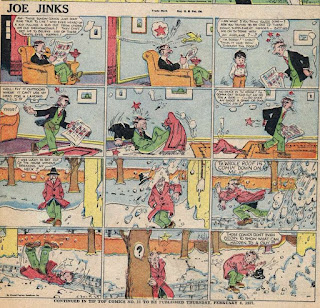 Which is why we're concentrating on strips like Chris Crusty, a strip that not even the most resolute platinum age comic strip fans talk about, but we're talking about it here because I am fascinated by this tiny gum vending machine which, if it did exist, must have predated the gumball machine we know and love but never use today.

This Joe Jinks strip is so meta that we can't ignore it on a blog as meta as this one. While Joe complains that bad things never happen as often in the comics as they do in real life, it begs the question -- for us, looking at it from a RPG perspective -- how many bad things do we want to have happen in our game sessions, in order to simulate real life? 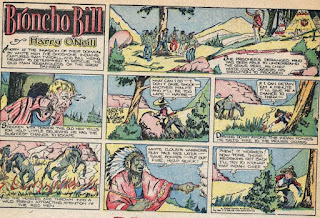 I don't have an answer to that, as it's something for each Editor and his players to decide on as a group. When I'm running a game, I prefer to emulate real life as much as possible, with comic book characters and tropes just inserted into it as if it all made sense. But even I see that if you heap too many challenges onto your players -- without equal rewards -- they are going to be discouraged.

In Broncho Bill, we get a tactical suggestion of setting a grass fire to serve as a distraction, and 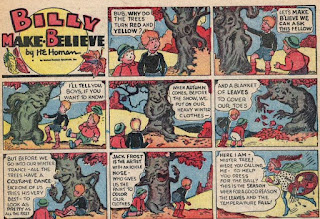 perhaps Bill can be forgiven for taking such an extreme resort since a life is at stake. And yet, from our modern sensibilities, it may rankle to see him run the risk of starting a fire that could get out of control and cause wide environmental damage. And herein lies a difficult call for the Editor and the use of the save vs. plot mechanic to restrict non-Heroic activity -- do you restrict according to the standards of the day, or our modern standard of heroism?

Let's leave aside such heavy questions to look at 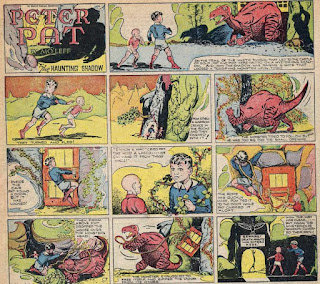 Billy Make-Believe for (ahem) a spell. We have seen tree-like creatures before in comic books, but this is the closest to Tolkien's ents I have yet seen. And this is for sure the first appearance of Jack Frost in any comic book. He certainly looks comical, with his icicle nose, and he has fairy wings despite being a taller than Billy.

Not only Billy Make-Believe, but Peter Pat is turning into a font for new mobster-types -- except, as much as I'd love to stat that pink thing, what should I call it? A turtlesaurus?

Besides that, the tactic of tying the rope to 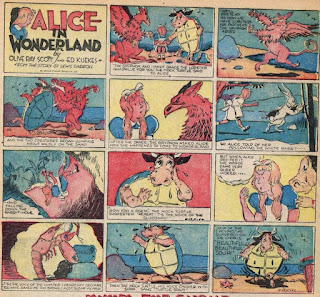 the turtlesaurus and having it pull the door open for them is pretty clever.

The only time I ever see gryphons in comic books seems to be from adaptations of Alice in Wonderland. Does this mean I need to stat mock turtles too? Should they be distant cousins of turtlesaurs?

Jumping into issue #12, this installment of Hawkshaw the Detective borrows more than usual from Sherlock Holmes, with the action being borrowed almost wholly from the story "The Adventure of the Empty House." And yet...this tiny strip also, in a way, anticipates Batman and how so many of his adversaries 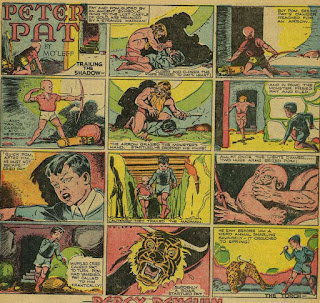 have psychological hangups. One could imagine this foe being called The Pinner, if Batman faced him...

Another bizarre critter in this issue's Peter Pat! Maddeningly, these inventing animals are never given names. What do I call this? A Cheetah-Bull? It looks tough, but Peter backs it into a corner, drops a net on it, and it's completely out of the fight on the next page.  2 Hit Dice, maybe?

The madman is called a "monster," and I did stat madmen in Supplement V: Big Bang. I'll have to make sure they are featured in the Mobster Manual. 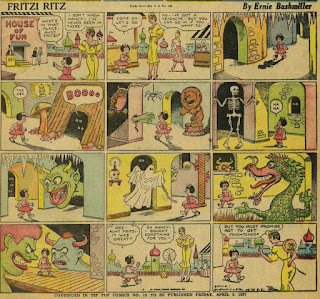 When looking for hideout dressing for scary rooms, perhaps I'll draw inspiration from this page of Fritzi Ritz.

(Scans courtesy of Comic Book Plus.)
Posted by Scott at 4:40 PM