We're up to April 1936 now and this review of Popular Comics #3 starts out with Dick Tracy. This installment of the Boris Arson story has Boris holed up in an ingenious hideout. The bad guys enter through a cave with bars on either side, protecting them from wild bobcats. The bars are set on runners so that, when they get to the end of the tunnel, they can pull the bars back with them, blocking the back of the cave, while leaving the bobcats free to roam the entry cave.

But -- bobcats?  I wouldn't give a bobcat more than 1/2 a Hit Die, not making them much of a threat to anyone but 1st-level Heroes.

This installment also features some suspicious science, with Dick Tracy able to shoot through a stone wall with a machine gun, instead of the bullets just ricocheting... 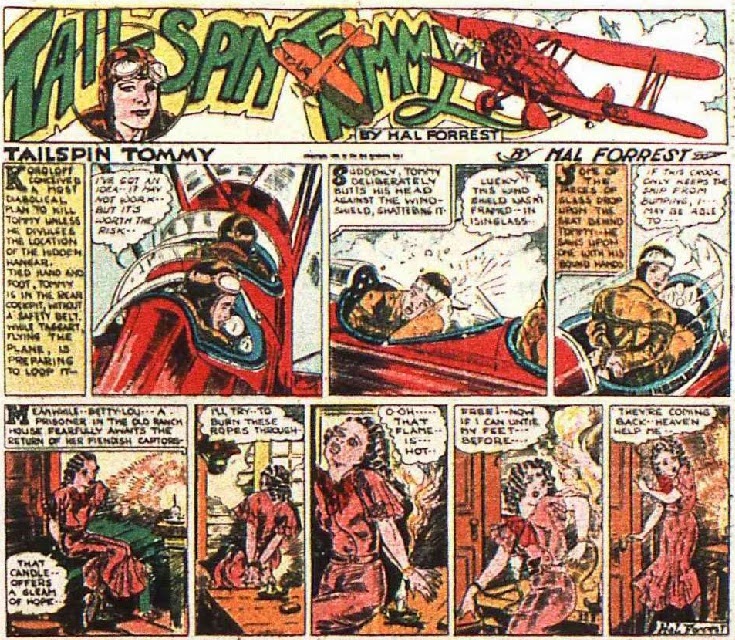 I've previously showcased some traps here, but Tailspin Tommy this month is all about how to escape them. On display are the twin cliches of breaking glass to cut bonds and the more dangerous route of burning rope off your hands. In the latter case, I would require taking 1 point of damage in order to make sure the rope also took enough harm to burn through. 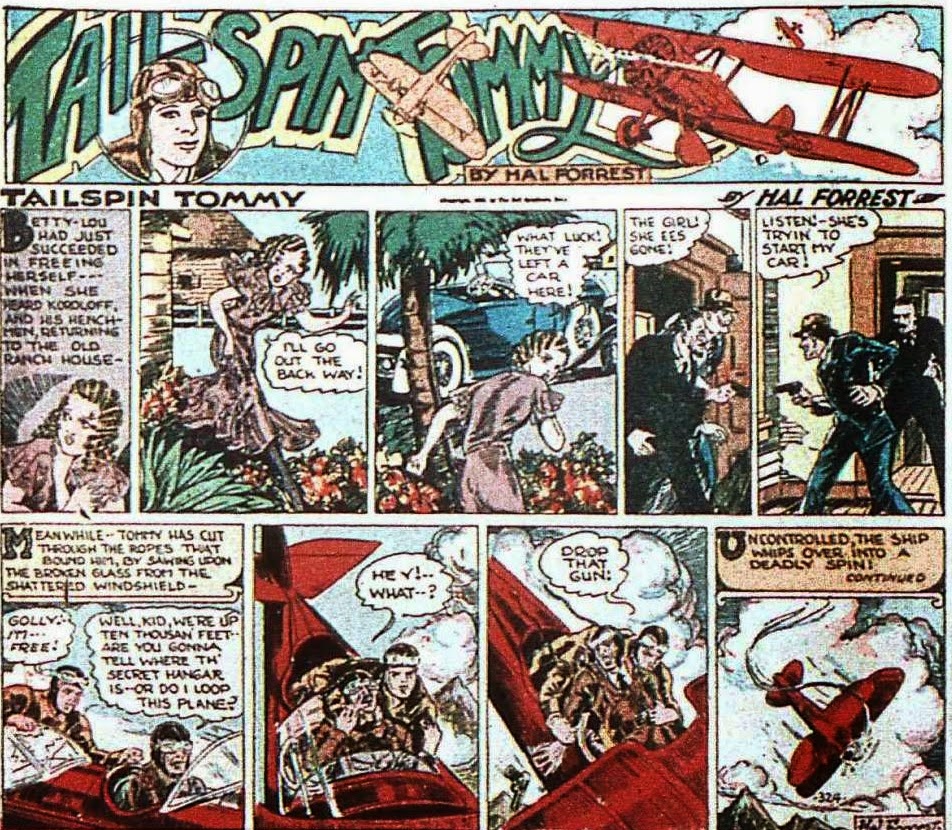 This page mentions something that should have been a stunt listed when the Aviator class debuted in The Trophy Case -- Loop Plane. This stunt would cause a passenger to save vs. science or fall out of the plane. 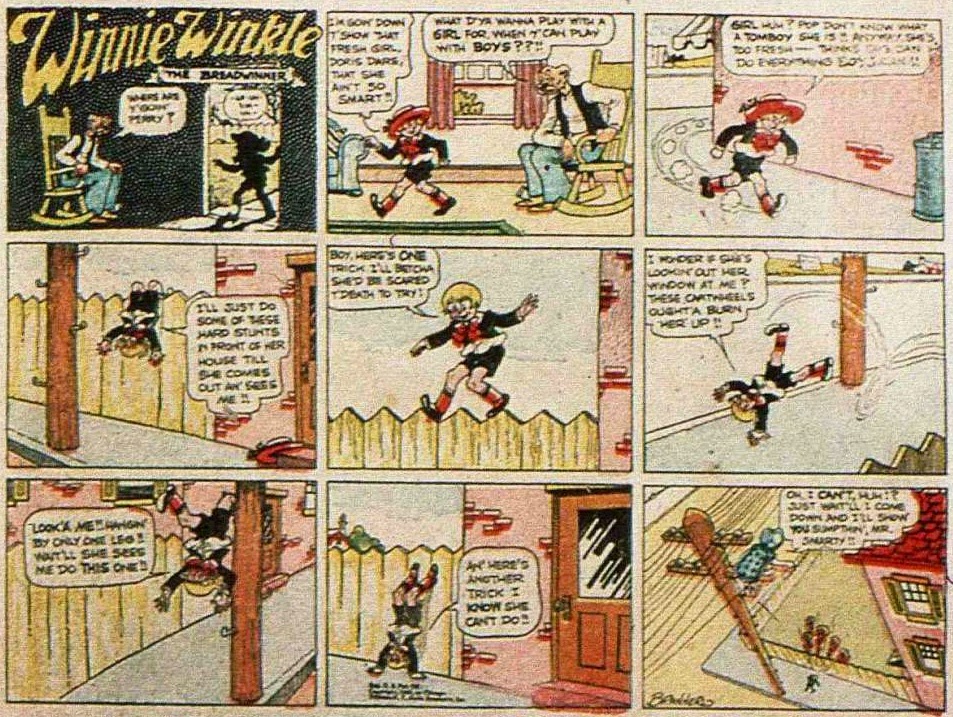 I've also talked about stunts a lot previously. Stunts were a mechanic to give Heroes a limited number of automatic successes at skills befitting their genre, but were limited at first to the Aviator and Cowboy classes. This installment of Winnie Winkle demonstates, though, that any kid could have access to stunts like Climb or Tightrope Walk.

But should they?  Stunts are not for comical displays to win over girls so much as to influence the results of combat.  I will stick, then, with my first thought, which was to limit access to stunts, though in the next edition everyone will get a chance to use them at higher levels. 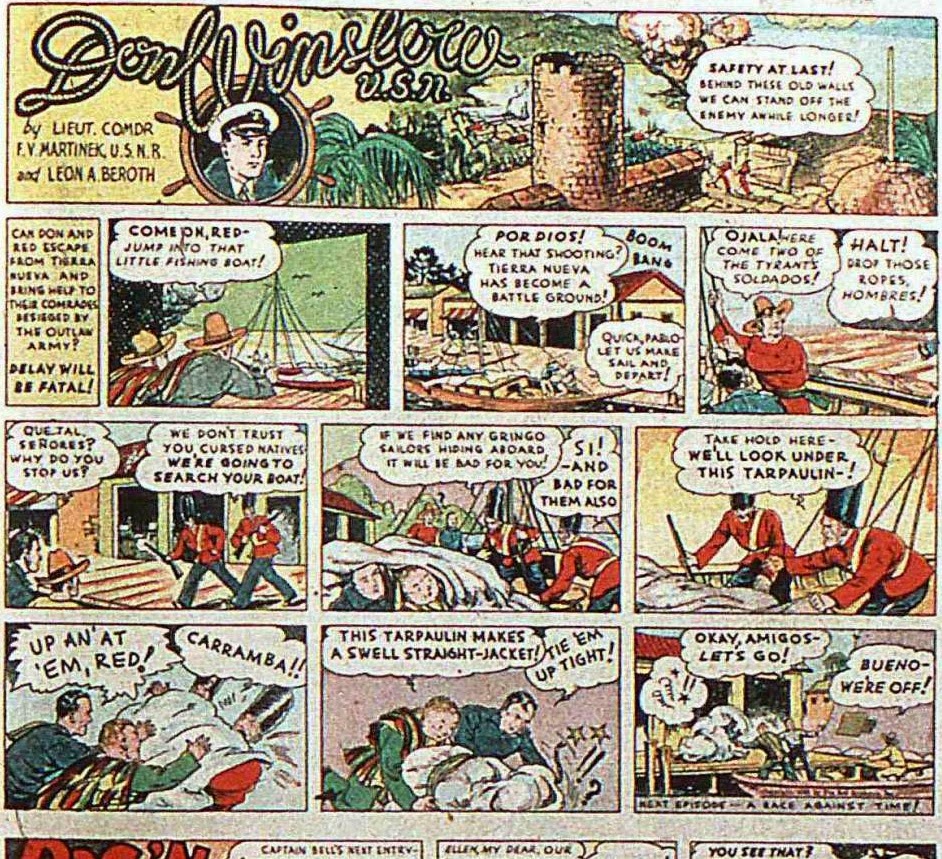 Although Don Winslow and his pal seem to be using sails as weapons here, I would treat this as a normal grappling attack, ignoring the use of the sails in the equation until getting the results. If a successful grapple, then the victims can be assumed to be bound in canvas as well.

Bos n' Hal begins a long story here about a hidden land near the North Pole, a green tropical island surrounded by a curtain of steam clouds. Such hidden land locations are perfect for H&H Heroes to explore.

When to require a stunt is the question.  Does Terry, climbing hand-over-hand under a rope bridge, require some sort of climbing check?  I would be inclined to say no; climbing as a specialized skill would be knowing how to climb sheer surfaces normal people could not. What Terry is doing could be attempted by anyone strong enough. I might require a save vs. science, though, to inject a little suspense into the trip across, but also to determine if gravity or upper arm strength wins out here.

Connie here demonstrates the +1 modifier for attacking with height advantage, as if the machine gun and soft cover from the roof's edge didn't give him enough advantage.

Lastly, Texas Slim reminds us that not all encounters need to be hostile, as this encounter with a black bear could have gone much differently if it saw Slim as a threat!