The debut of Spy Smasher's gyrosub, a combination airplane/autogyro/speedboat/submarine, which makes it a very handy and versatile trophy transport item.

This is a rare Virginia-based adventure.

In the Golden Age, it is not unusual for the Heroes to be more technologically advanced than the villains.

Explosions have much bigger blast radii than most D&D spells; in 2nd edition, I increased the blast radii of multiple trophy weapons to better reflect reality.

I've  never been in a dirigible and any effort I would have made at mapping the interior of one would have been informed only by the Rocketeer movie. So it's handy to see a panel like this last one.

Spy Smasher fails his save vs. plot and wastes time on the underlings while the Mask gets away.

A smart villain has an escape vehicle attached to his main vehicle. A smart hero looks for that vehicle before confronting the villain.

It's also worth noting that, once the main villain escapes, the story just skips over the anticlimactic stuff about subduing the crew, and Editors can feel free to do the same.

This is Scoop Smith, of the journalist genre. Here he shows some decent investigator skills, checking the list of former employees to see if any of them might fit the M.O. of "Doctor Death."

Scoop and Blimp (sidekicks get terrible nicknames) rather easily fall for the ol' trap door under the chair trick. We also have another example of the term "dungeon" being used for a villain's hideout.

The fall stuns Scoop and Blimp because they were reduced to zero hit points, but made their saves vs. plot to only be stunned.

The life machine looks rather unimaginatively like a movie camera.

The cup of cyanide pills rigged to drop into the sulfuric acid is an excellent trap for science-based hideouts.

Note how Dr. Death can easily tell the hero from the sidekick and doesn't bother monologing in front of the sidekick (and how the sidekick saves the hero by just happening to find a wrench in his cell!).

The first example of Raise Dead being used in comics, and only on two unnamed henchmen at that! 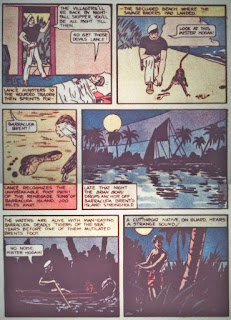 Lance is a fighter, but we see even fighters can perform first aid.

Lance is also really good at tracking, being able to recognize a specific person by a single footprint (expert skill check).

Barracudas do not get nearly as much ink as sharks and octopi in comic books, so it's nice that they get mentioned here.

A cutthroat native might be statted as a bloodthirsty hoodlum instead of a simple native.

Again, the sidekick saves the hero, this time because the monkey was able to spot the trap that Lance missed (kind of embarrassing when a monkey beats you at skill checks).

(Scans courtesy of Comic Book Plus.)
Posted by Scott at 9:34 PM