This is it! I feel like the last four years of this blog have led up to this moment, as I consider the first year and a half run of Captain Marvel to be one of the best runs in comic book history.

And, no, you didn't miss an issue -- Whiz Comics accidentally began with #2, counting the unpublished ashcan copy as #1 (which most companies did not add to their issue count).

Before we get into this, let me add that I fine tooth-combed this story previously for details, and annotated it carefully here, here, here, and here.

So what is there left to do? Why, talk about game mechanics, of course!

As I said on my other blog, it's unclear if the Phantom Companion is compelling Billy, perhaps with a Charm Person spell.

The Strange Subway Car must be a trophy item, capable of Plane Shifting to prepared destinations.

Note the two figures in front of the Car. They seem to be real creatures, possibly lizard men or troglodytes. They are never encountered or mentioned again, though they could be natural inhabitants of the caverns inside the Rock of Eternity (not named as such yet).

There is currently no spell that makes thunder happen whenever you speak your own name, though it might be useful to have such a spell. It would probably be low level, unless treated as a Power Word spell and connected to something more useful like, say, Power Word: Transform into Superhero.

The Historama is itself a powerful, magical trophy item, like a flat-screen Crystal Ball that can view any moment in history sought for (Shazam can do so quickly because he's studied it for centuries; I would advise that new users have a very low chance of seeing events).

And here we get the alter ego "race" for Heroes which was absent from the Basic 2nd edition book, but will be in the Advanced Hideouts & Hoodlums Heroes Handbook.

Something happens to Billy after Shazam dies that he cannot remember, but it's really hard to assign a game mechanic to something we can only speculate about. My guess is, the death of Shazam unleashes such disruptive magic that it reverses Billy's transformation (Dispel Magic?), and a Forget spell on Billy.

This does bring up the question: should Dispel Magic work on Captain Marvel, at least if cast by a high enough level magic-user? I would say yes...but it does seem to set a precedent for allowing it to affect all powers of superheroes, which an Editor should think carefully about.

I statted Captain Marvel as an alien in Supplement IV: Captains, Magicians, and Incredible Men because he's not Billy transformed into a man, but a magical construct with its own intelligence that Billy's mind also inhabits. As an alien, he can make good jumps at will, and is unlikely burning a power here.

As I've said before, breaking through windows does not require a roll for a superhero.

A radio silencer is a mad science trophy item in H&H.

Smashing lab equipment is the second category for wrecking things, Machines. Ripping open the door is the first category (Doors).

Less clear is if CM needs to be using a Raise Car power to lift up the elevator car. My quick research seems to indicate that an elevator car weighs over a ton -- too much to just hand-wave, I feel (I also missed this first indication of Captain Marvel's strength in my annotations!). 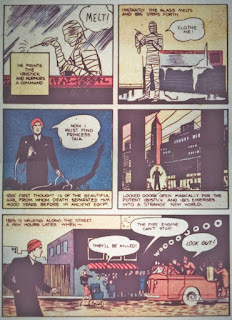 Moving on, here's a first look at Ibis the Invincible. In the comics, Ibis just has to say something while holding the Ibisstick to make it happen, but what spells could explain these things?

A glass-melting spell sounds too specific to be of much use, but a spell that mimics wrecking things would be useful to a magic-user.

The second spell is likely Disguise...and yet, if Ibis has had his eyes covered in mummy wrap all this time, how did he know what clothes modern people wore? Perhaps this is a 2nd level spell that clothes you in the illusion of how people expect you to look, rather than a disguise of your own choosing?