So, instead of tracking down the Faceless Phantom, Dr. Strange takes Jerry to the circus. Apparently, it was not ridiculous in 1940 to have a boxing ring in a circus tent, or for a circus to have $5,000 to put up on a publicity stunt?

The gorilla, at least, seems to hold out longer than the tiger and the octopus did. Despite the fact that the circus ringmaster just tried to kill him to get the $5,000 back, Strange lets this slide so Jerry can get to a bank. By random (?) coincidence, Faceless just happens to show up to rob the bank right then. 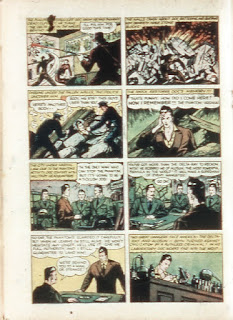 Here we see another example of why it's important for a superhero to keep a Raise power prepared; Strange doesn't have it so, even though he has superhuman strength, he can't get out of the rubble without help.

Strange says his amnesia is gone, but he seems to have forgotten all about his Supporting Cast Members Jerry and Parker (remember Parker, the pilot?).

Now, at this point, Strange has maybe 3,000 xp under his belt, yet when he goes to talk to these guys, who I'm guessing are the Joint Chiefs of Staff for the Armed Forces, given their authority, they agree to give Strange carte blanche (or are they only humoring him?).

The trophy armor Strange has invented here is Ray-Proof armor (AC 3, immune to rayguns). With Army financial backing and enough time I suppose he could make a dozen suits like this...but isn't Faceless taking over the East Coast while he's kicking back in this down time activity...?

If Strange's gun shoots Alosun-negating gas into the air, shouldn't he be worried about entering its area of effect? Once it's in the air, he's going to have to be very careful where he moves.

This page just reminds us that even a smell can be a clue the Editor means for you to follow up on.

So now we're finally told that Faceless is only turning invisible after all. I guess Strange's player just didn't know that he could still try to attack invisible opponents!

It seems highly unlikely that Strange knows of an ancient society that had invisibility chemicals and reagents to counteract them, but okay.

After all Strange has been seen doing, you'd think seven hoodlums would not be this confident against him. Maybe we need a new mobstertype -- overconfident hoodlums!

Alosun or no Alosun, the Editor has decided to bump up the main bad guy's level to match the Hero's, just for a climactic final battle -- which is within the Editor's purview to do.

Really only included this page in case you were interested to find out who Faceless was. Surprise!

This is from another feature in this issue, Nickie Norton, Secret Service Agent. It reminds us that Heroes can hire lookouts too, hideouts don't have to be entered by the front door, and it's always a good idea to bring a flashlight.

The idea of pressing a statue's eye to open a secret panel is interesting hideout dressing.

(Scans courtesy of Digital Comic Museum.)
Posted by Scott at 10:38 AM