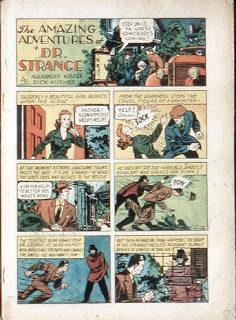 Ouch, my eyes! I haven't had to look at a scan from fiche in a while.

Anyway, this is the first Dr. Strange in comics, and you'll notice he's more Superman than Master of the Mystic Arts.

Adventure begins quickly for Dr. Strange, as he's just walking along and hears a scream.

Here we have an example of a head blow not knocking out a Hero.

It's unclear what the villain is doing here. Turning invisible? Most players would want to continue trying to attack, but the Editor, perhaps insisting on a more realistic reaction, required a save vs. plot or be too shocked to act for 1 turn, which seems to have happened here.

The superhero power Leap I is in clear evidence here, but it gets sketchier once the shooting starts. It's unlikely that Strange can take a hail of bullets at 1st level, but if he's activated a second, buffing power like Nigh-Invulnerable Skin, then he probably has at least one brevet rank. And then again, the average gangster can't shoot that many times with even a tommy gun, so maybe Strange could take that damage and just be "sorely wounded."

Virginia performs first aid, restoring 1 hp to Dr. Strange. It's unclear if he can't perform first aid on himself, or if he accepts her offer just out of politeness.

The delta ray is an unusually powerful weapon because it kills and it wrecks things, as if at least a level 5 superhero. Of course, for now, it's only a MacGuffin; the danger is only if the Heroes get their hands on it.

I thought panel 4 was unusual enough to warrant sharing. "Carson Manor" isn't written on the card, but is printed as if it was a business card. Yet we'll find out on the next page that Carson Manor is a haunted house. So I wonder what the history is there; is Carson Manor such a well-known haunted house that it serves as a local tourist attraction?

On this page we finally learn what gives Dr. Strange his strength and leaping abilities, but we also learn that superheroes need a self-healing ability. I have toyed with the notion before and, while it didn't make it into the 2nd ed. Hideouts & Hoodlums Basic rulebook, it will surely be in the Heroes Handbook.

The manor's foyer looks suspiciously like a storeroom, or is being used as a storeroom. The mobsters inside smartly keep a pair of lookouts by the entrance (and, one could presume, by every entrance around the manor).

Another example of a superhero forgetting to take defensive buffs and going down quickly.

A possible problem with how the superhero class works: wrecking things is supposed to have no duration, so Strange shouldn't need a new dose of Alosun. Of course, it is also possible that Strange's player just keeps blowing his wrecking things rolls, and joked about needing an extra dose of Alosun to charge his dice. Sure enough, the player easily makes the very next roll (possibly getting double 6's, with those results).

Crashing upwards through a ceiling could be as easy as wrecking robots, if Strange also has a Leap power engaged.

Panel 2 is difficult; it looks like Strange is grappling four opponents at once and no power currently allows this. There might need to be a level 2 power called Step Right Up, Boys! that lets you grapple up to four times per turn.

Strange sure took his sweet time activating his Invulnerability power. This also tells us that Strange has at least five brevet ranks.

That leap would have done 3-18 points of damage without either his Leap or Invulnerability power still engaged.

It does not normally work this way that one's clothes catch on fire in 1 turn, and then the body takes damage in the following turn. More likely, Virginia did take fire damage, but only 1 point.

Shielding Virginia, or taking damage for another target, is something I struggle with. On one side, it's very super-heroic. On the other side, if meta-gamed it could really change how combat plays out ("How many hp do you have left? 3? I've got 7, I'll take that hit instead").

There is precedent on this blog for using others to absorb falling damage (if you land on them), which is mechanically the same as absorbing car-rolling damage.