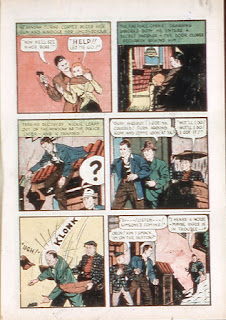 I spent a lot of time this week on this issue's main feature, Dr. Strange, but I'll spend all of this one on the back-up feature, Nickie Norton.

In Cortez, we have a particularly malevolent villain, willing to torture women to get the gold coins he needs.

That seems an odd way for a secret door to work...the entire fireplace swings on hinges? That's an awful heavy secret door...

Lefty is a sidekick who has a knack for being in the right place at the right time. In fact, I'll have to think of a way to express that as a game mechanic if I decide to make sidekicks its own mobstertype in the Mobster Manual.

It's kind of weird that all the dialogue in this feature is in quotation marks...

"Snoop the Flatfoot" is a perfect example of a copper -- a comic relief policeman of the Thomson and Thompson mold. It seems highly unlikely that being tripped would make someone fall into two buckets in a row, but it can happen to the copper (a mobstertype that is already in the Mobster Manual).

There is a lot of good hideout dressing in the following pages. This one shows that the underground section is entirely different in construction from the house, with wooden rafters and stone block walls.

Sounds travels really far in a hideout when the Editor needs it to...

If not the modern suits, this page could easily be from a typical D&D campaign.

A good tip is always to try opening doors before trying to unlock them. The woman inside might have survived had they not wasted time with the skeleton key.

Looking for stones without mortar around them seems like a good way to search for secret doors.

Most published adventure modules don't give you descriptions for hallways, as if they were always empty. This one shows stacks of boxes along the walls, a barrel, a (what is that?) canteen (?) hanging from a post, as well as more exposed timbers.

Usually players need to be mapping carefully to tell where there might be secret doors; Nickie's player must have a really good sense for visualizing.

This secret door is a section of wall that pivots, revealing a torture chamber.

It's unclear what makes the guillotine blade drop, since no one is here. Perhaps it was rigged to drop after the secret door was opened?

The ol' door-slams-shut-behind-you-and-the-room-fills-with-poison-gas trap. It's awful handy that there is a trap door in the ceiling of the room, though, and I wonder if they would have thought to form a human pyramid had Nickie not shown up first.

I must have read this story too fast, because I missed what the gold coins had to do with the submarine plans.

What's the difference, Nickie? The enemy has to already know how to make the submarine, whether the plans blew up on the ship or not.

If you're part of the secret service, and you're famous for it, are you really an ace...?