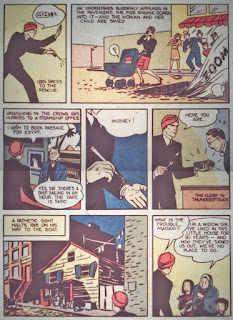 Ibis the Invincible is not acting like a 1st-level magic-user here. Create Underpass doesn't seem like a spell that needs to exist, but perhaps a 4th-level Dig spell would explain that.

We learn how much sailing from Manhattan to Cairo cost back then.

Again, I'm skeptical about the need for a Create Money spell (though maybe Fool's Gold could be modified for this). Also, since Ibis would not yet have encountered American money, it seems unlikely he would have known how to make the right kind of money, and makes for a pretty convincing case that this is another illusion that makes you see what you want to see (I had suggested last time that Ibis used an Improved Disguise spell that makes him appear to be wearing what others want to see him wearing).

Create Cottage does have some precedent, lying somewhere between Leomund's Tiny Hut and Mordenkainen's Magnificent Mansion, making this likely a 5th level spell -- but only if temporary. If permanent, this has to be a Wish, and a 9th level spell!

Create Bridge could actually be a spell with a lot of uses, and if it had a short enough duration I could see that maybe being only a 2nd level spell.

Excellent commentary on world affairs, circa 1940. 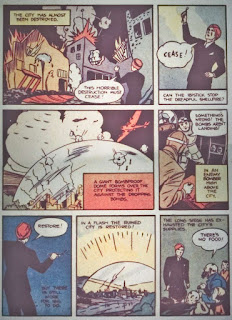 Wow, okay, this is Protection from Normal Missiles...but instead of 15' Radius, it's extended to 1 mile Radius. And then there's Restore City, a spell that has got to be Wish-level power.

I did have a conversation here in the comments section (an actual conversation with a reader!) recently about the issue of if Hideouts & Hoodlums emulated the power-level of golden age comic book characters well enough. I would use this page as a prime example for my answer: yes it does, as far as I would wish it to emulate those comic books. Because, really, stopping an enemy bombardment in one turn and then reversing all its damage in the next turn -- how do you build a challenging and entertaining scenario when they can all be resolved this quickly and easily? 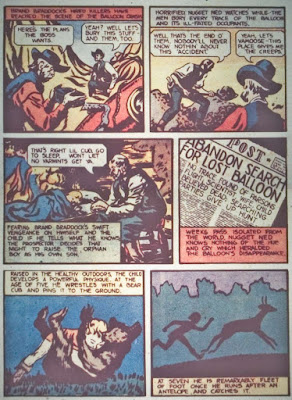 Moving right along, this is the origin story of Golden Arrow. You only get part of it on this page, and it's interesting how often his story seems to go in a Mowgli-in-the-Wild-West direction and then surprise detours.

This page is still early in the origin story, so I'm not sure what to make of these last two panels, or if I should make anything out of them. Being able to wrestle a bear cub at the age of 5 or catch an antelope at age 7 seem relatively superhuman. It also suggests to me that half-pints be able to have classes like mysteryman or even superhero. I have toyed with the notion in the past of treating half-pints as a separate race.

I'm not entirely sure yet how I would make them a separate race (I mean, obviously they aren't ever going to literally be a separate race, but to separate them out from normal humans game mechanics-wise). It would make sense to take away the free Supporting Cast Member (unless the SCM was a parent). It seems like half-pints would do half damage, but others would have to save vs. plot to harm them. Anyway, it all needs more thought.

This would be a world record for a horse jump (it currently stands at 8'). So, if I did bring back the cowboy class (and I'm not saying I am yet), one thing that would distinguish them is that they could not only push themselves past normal limits with stunts, but they can push their mounts too. 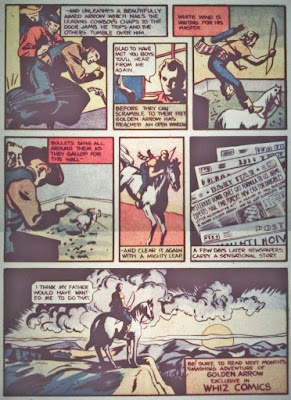 That is one beautifully aimed arrow, but it does create a problem for me. When I revised the mysteryman class, I limited stunts to applying to out-of-combat situations, so as not to take away what makes fighters special. So this can't be a mysteryman-cowboy using an arrow for a stunt, if the result is a trip attack.

So then I have to decide if a trip attack should normally be allowable at range. I guess the answer to that should be yes, though it would make more sense when throwing something heavy at someone else's feet, or launching a lot of marbles across the floor.

And that brings us back to the perennial question: should Heroes get to attack more than one opponent per turn? There is ample evidence of this in comic books, yet I've shied away from this in terms of game mechanics because it's not fair in a group setting to have one Hero get to attack everyone before the others have had a turn. But...what if this was an optional rule for solo play only? I will consider putting that in the Heroes Handbook.

And, lastly, if I do bring back the cowboy class, it will have the ability to fall from any height, without damage, as long as there is a horse and saddle within 10' of where he would have landed.

And now on to Spy Smasher! I'm including this page because it gives my players a goal for how much money they have to save up to buy their own aircraft carrier.

Spy Smasher is a mysteryman, and the surest sign of that is a dramatic window entrance. In fact, my biggest regret with the class redesign is that it included no mechanic for dramatic entrances. I suppose they could use a stunt to ensure they have surprise, but that's not quite what is happening here; this is more like what mysterymen could do in 1st edition, with their intimidate ability, forcing a morale save before they've even done anything. Ah well...

(Scans courtesy of Comic Book Plus.)
Posted by Scott at 7:25 AM