It looks like I'm easily going to finish discussing Fantastic Comics #3 before the year ends, as I have only the Sub Saunders installment left to discuss.

Yesterday I had misinterpreted what was hanging from the mermen's faces because of the quality of these scans. Yeah, it would have been interesting if they were tentacles, but they just have beards of boring ol' hair, as you can clearly see in panel 4.

Speaking of clearly seeing, Poseida can be forgiven for getting a little excited when he sees Peg, as that is one skin-tight diving suit! Interestingly, only Saunders is wearing a skirt for modesty.

Poseida is wearing a chainmail gorget around his neck. It would offer no Armor Class improvement, but must be a fashion statement. 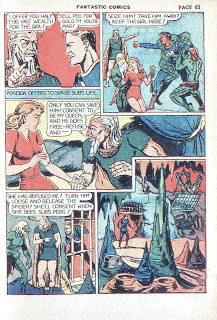 Sub is offered (ahem) a subload of treasure in exchange for just one member of his supporting cast. Now, a metagamer might look at this and think how Peg is "only" worth 100 XP per session she tags along on, while the treasure is worth enough XP to level up immediately. But Sub's player isn't a metagamer and he says no.

Now, working under the assumption that Peg is a SCM and Sub is being played solo...how does the Editor decide Peg's reaction? A reaction roll vs. Poseida, with a substantial penalty for him offering Sub half the fortune instead of her? A loyalty check for Sub? A 50-50 coin flip? (All of which would be legitimate choices for the Editor)

"Release the spider!" has got to be an unnerving thing to hear when you're about to fight something in an arena...

For a spider, that looks awful crab-like. Giant crab spider? It might also be the largest giant spider we've seen so far in a comic book.

I can't imagine what all that glassware has to do with the radio equipment. Likely this is just visual shorthand for looking hi-tech.

The frog men already have an entry in the Mobster Manual (now, obviously, pushed back to 2019), but I may have to up the number encountered. They also seem to be really Lawful or really coordinated, with their ability to form up into ranks underwater so neatly.

(Scans courtesy of Digital Comic Museum.)
Posted by Scott at 9:16 AM