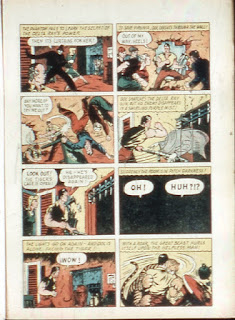 And we're back with more of Dr. Strange! If this feature seems unusually long, it's because it is! It runs on for a record-breaking 37 pages and was probably intended for the first three issues, but I'm guessing the new publisher, Better Publications, didn't have enough other material to get a full anthology out.

We get an example of wrecking things in panel 2, unarmed combat (2 attacks vs. unarmed foes) in panel 3, but now we have to decide what to do about panel 4. Is the Faceless Phantom using Invisibility (as I first thought, but now seems increasingly unlikely), the spell Poof! (disappearing in a swirling purple mist is very Poof!-like), or is this a new power of Intangibility? Or, is intangibility just flavor text for Imperviousness?

What's more important is that, without Super-Senses, a superhero is practically powerless in the dark. Had the lights stayed on, there was no way anyone would have been able to spirit Victoria away from him again.

I don't know about you, but I'm getting kind of annoyed with these early superheroes killing every animal they encounter. What is with that?

The hidden aeroplane is dropped trophy loot, meant for the Hero to find. 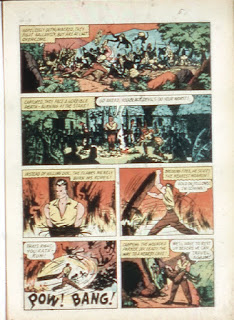 It would be nice if I could tell from this blurry picture how many natives it takes to "hopelessly outnumber" Strange. Very likely, they just keep coming at him in waves until the durations end on all his buffing powers.

What doesn't emulate well in Hideouts & Hoodlums is not being able to wreck things, and getting back his defensive powers. I have considered putting a cap on how often per day a superhero can wreck things, and maybe he wasted them all on wrecking spears and shields in the big fight.

As for getting his powers back, maybe he was a prisoner for 8 hours, giving him time to get his power slots refilled, but it doesn't make sense to waste 1 turn of a high-level power protecting himself from the fire when he could just bust the ropes by flexing his muscles instead. Even ignoring game mechanics and looking at this from a story perspective, it doesn't make much sense.

Poisonous snakes can be encountered in groups up to 7, when found in their dens, which are apparently sometimes at the bottom of 20' deep pits.

Pushing attacks must always work on superheroes, no matter how defensively they are buffed up.

Wha?? The delta ray gun is only a rifle? That's the weapon that had a range of about a mile?

Amazingly, after killing a tiger in one hit, Strange is unable to save himself from seven poisonous snakes without help. Perhaps he burnt through all his powers fighting the natives.

The Faceless Phantom had a pen and paper on him in the jungle, and took the time to write Strange a note? Or was he so cocky he wrote the note in advance?

Again, Strange failed a save vs. poison and was kept asleep.

Watch this plot hole about the stolen Alosun. Despite not having his Alosun, he will be displaying superpowers repeatedly for the rest of the story (and don't forget how he recovered his powers while tied to a stake without taking more Alosun). The Alosun is clearly flavor text and does not affect him game mechanics-wise in any way.

Tropical hurricanes need to be on outdoor wandering encounter lists when out at sea. As must giant octopi (naturally). 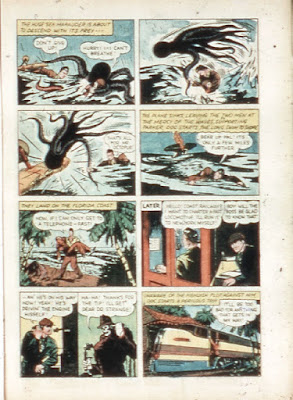 Almost as bad as all this animal killing is how they never even stand a chance against the Hero. If anything killed the superhero genre, it's probably the lack of suspense that engendered.

Without any fatigue rules tied to movement, there is no game mechanic stopping Strange from swimming a few miles without even needing to buff with a power.

If I was Strange's player, I would call shenanigans on my Editor for this agent of the Faceless Phantom, who just happens to be near the beach where Strange just happens to wash up on shore. How the Faceless Phantom could possibly anticipate that Strange's plane was downed by a hurricane and had to swim to Florida, instead of arriving at an airport, is beyond suspicious.

And speaking of that hurricane, what happened to the hurricane that was just miles away from mainland Florida a little while ago? Now there's not even a tropical storm on the coast.

I skipped a page where the Phantom's men tried to off Strange by crashing another train into his (they were two well-drawn trains at that). The crash gave him amnesia - a comic book staple so common that I finally included it in 2nd edition (p. 90) of the Basic book, but only under head blows. 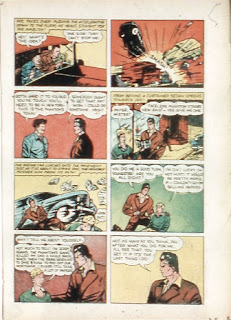 The amnesia was only temporary and the hobos all got beat up on the pages I skipped over.

By now, you've probably figured out that I'm not a fan of this story, over all. One of the things I do like about it occurs here -- Strange's failure to stop the Faceless Phantom earlier has campaign-changing consequences. Now, weeks later, New York City is in a state of terror, besieged by FP's mobster henchmen.

Oh, and Strange picks up a kid sidekick. This is kind of a big deal because this is two months before Robin debuts in Detective Comics, making Jerry one of the first kid sidekicks, and the first one for a superhero.

(Scans courtesy of Digital Comic Museum.)
Posted by Scott at 10:33 AM