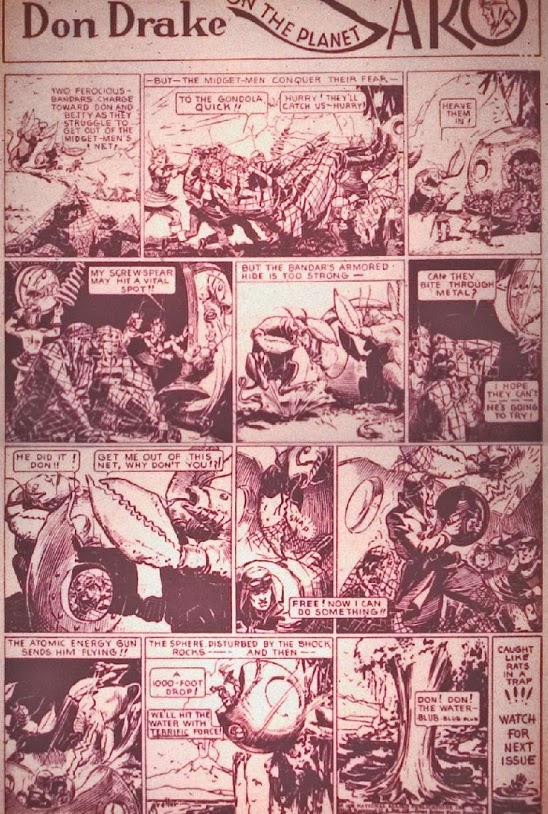 "Don Drake on the Planet Saro" already has some history with Hideouts & Hoodlums; quarterly zine The Trophy Case (v. 2 no. 4) had statted some of the mobsters of Saro, including the midget-men and the bandars pictured here.  The H&H rules, until then, included nothing specific about grappling with nets, so this was the first time anything was written up on the subject. The next edition will likely not include those rules for just anyone to use, but may be noted under specific mobster entries who are likely to use nets.

There was already strong precedent for mobsters to be able to wreck things like Superheroes. Mobsters in Book II: Mobsters and Trophies with as little as 3 Hit Dice, like cavemen, could wreck things. This might be toned down for weaker mobsters (like 3-5 HD ones).

It is, of course, not recommended that Editors give atomic energy guns to 1st level Heroes, though this seems to be a particularly weak one. I would think that an atomic energy gun would at least disintegrate a target, but this one only damages a target and pushes it back. A particularly nice feature of this gun is that it's mounted behind a shield, so the shooter already has light cover. 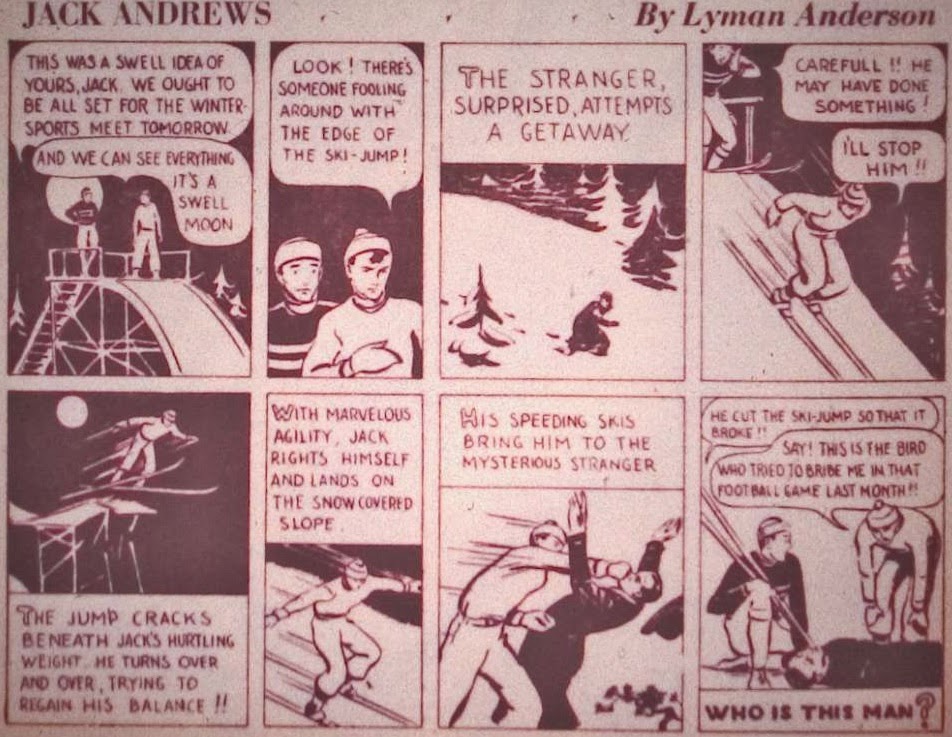 Jack Andrews is an example of the sports genre in comics. How does the Editor determine if Jack managed to regain his balance or not?  This short selection demonstrates the need for a skill system in a roleplaying game -- and this brief paragraph will explain how H&H skirts having one. Instead, H&H uses the saving throw game mechanic very broadly.  A strong argument could be made that Jack's player would have to save vs. science (gravity and inertia, in this case) to right himself before hitting the ground (a weaker argument could be made that Jack's player should save vs. plot, because if he doesn't land safely, he can't fight the mobster at the bottom of the slope).

The fleeing saboteur is not doing anything particularly sneaky to get away; he was just hoping for a beneficial surprise roll from the Editor. Before an encounter, the Editor rolls for each side to see if it is surprised (usually a 2 in 6 chance).  In this case, Jack surprised the saboteur. 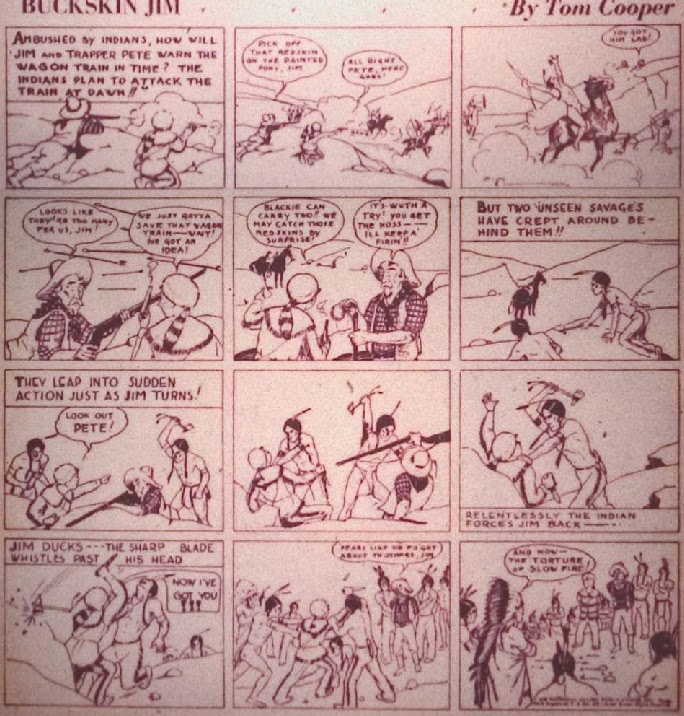 Sooner or later this blog would have to deal with the issue of the blatant racism found in Golden Age Comic Books. Rather than ignore it, H&H has taken the riskier route of staying truer to the source material and tries to incorporate some aspects of this into game play, as inoffensively as possible. These Indians would be statted as the mobster type called Natives in an H&H scenario (in some earlier drafts of Book II circulating, they were still called Savages).  Some players of H&H have had issues with any incorporation of this aspect of the comics and -- in total honesty -- this author has lost some players because of it.  Each individual Editor is, of course, free to use or not use as much of it he and his players are comfortable with.

H&H, as written, assumes a time frame of 1935-1941, but remains abstract enough to be applicable to a broad range of historical simulation, including future scenarios -- particularly the future as it was envisioned in the early 20th century. 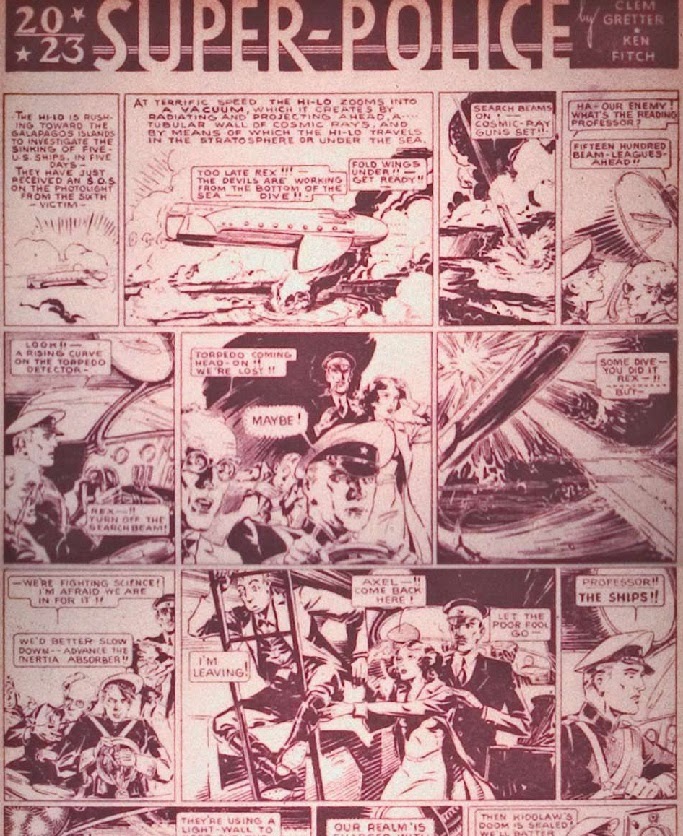 In 2023, the Super-Police have planes that are propelled forward at terrific speed with the questionable technology of creating a tubular vacuum in front of the ship with cosmic rays and pulling the ship forward through it.  Their planes are equipped with cosmic ray guns, torpedo detectors, and inertia absorbers -- and completely stattable in H&H.  For a cosmic ray gun, just up the damage (maybe 3-6 Hit Dice, with a chance of wrecking things).  A torpedo detector could be like a Detect Magic spell with a higher range. Inertia Asborbers might function like the Superhero buffing power of Imperviousness. And, while intended for a time just eight years in our future, it is not hard to imagine such a vehicle in the hands of an Ultra Mad Scientist in a high-level campaign set in 1940.

(Scans courtesy of Comic Book Plus)
Posted by Scott at 9:13 AM