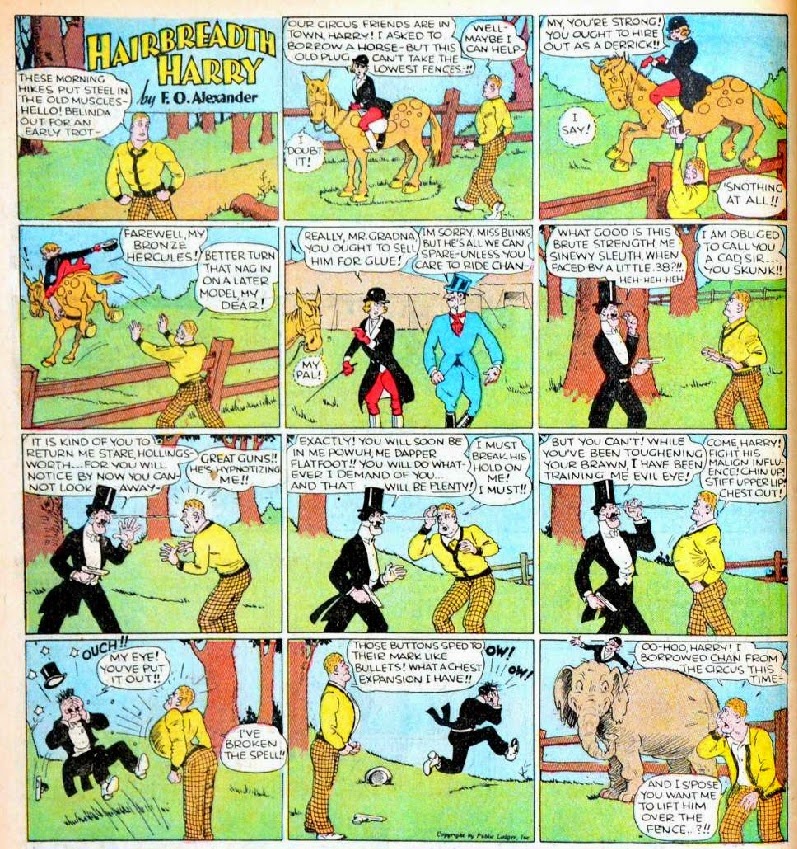 Some people will say that the superhero genre was born entirely with Superman and, to a large extent, that is true. There are a scant few precedents from the comic strips -- the Phantom with his masked identity, Mandrake with his magic, Popeye with his strength.

No one usually mentions Hairbreadth Harry.  Intended only as a parody of the melodramas of yesteryear, the rivalry of Harry and his nemesis, Rudolph, was exaggerated to the point where both, sometimes, exhibited superpowers.

Here, we see Harry clearly using what, in Hideouts & Hoodlums, we call the 1st level power, Raise Car (it works equally well on horses), and Rudolph is using the 1st level power of Hypnotism. Interesting, the level 2 version of Raise Car is called Raise Elephant (and I hadn't even read this comic book yet at that time, so it's just an interesting coincidence).

It is also worth pointing out that much of the content of Famous Funnies was reprints.  So, while this issue was on newsstands in August 1935, this particular page of Hairbreadth Harry originated from 1930 or earlier. 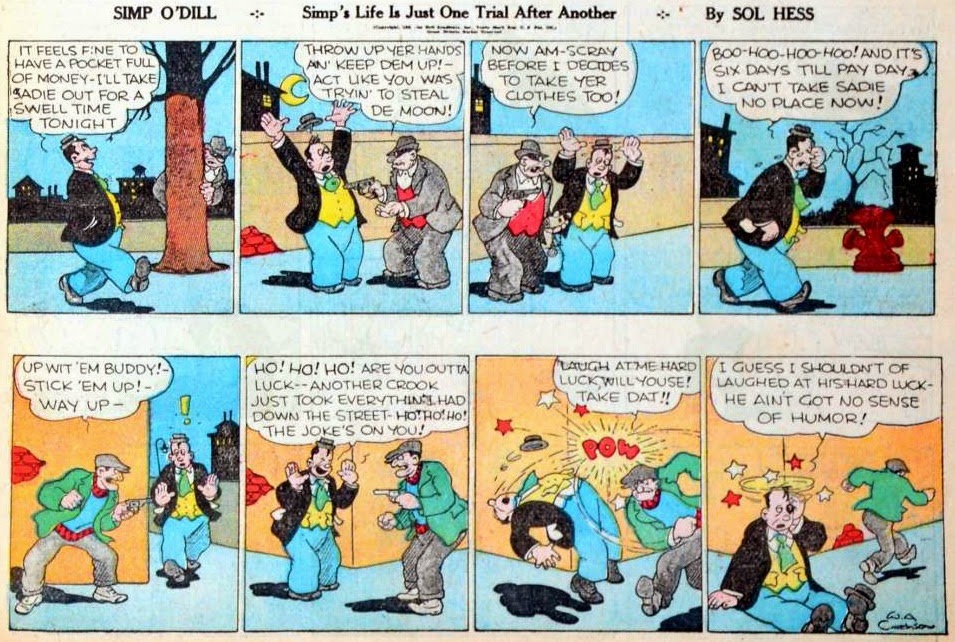 We check in on Simp O'Dill again to observe the urban blight of robbery.  Here we see an Editor who must be rolling for wandering encounters fairly liberally.  Book III: Underworld and Metropolis Adventures recommends one check every four-hour turn, but perhaps Simp is moving about a new city in 10-minute exploration turns.

Simp is being brutalized, probably, by only 1 Hit Die Robbers -- not a big deal for a beat cop or a fledgling superhero, but clearly too much for an unarmed civilian. 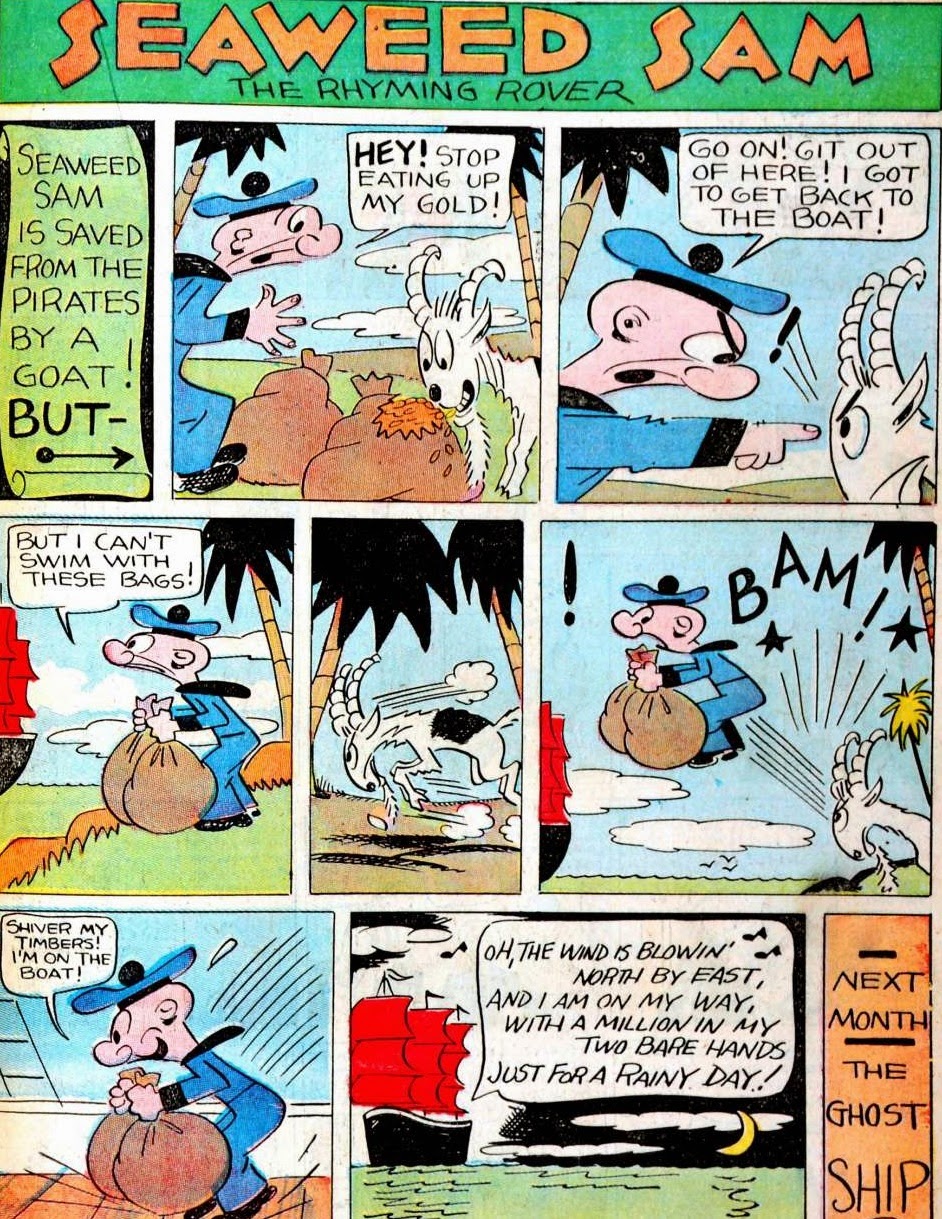 Seaweed Sam is nothing but filler and doesn't warrant a mention here.  The goat, on the other hand, seems to be a recurring antagonist for low-powered Heroes in a variety of strips. I should probably stat them. It would probably look something like this:  AC 9; HD 1/2; #At 1 butt (1-3); Move 10; AL N.

Below, we look in on Hairbreadth Harry again, this time making use of a creature called the oo-hoo bird, which circles in one spot when released instead of flying away. Useless as a mobster, a caged oo-hoo bird would more likely be a trophy one could loot from a hideout. 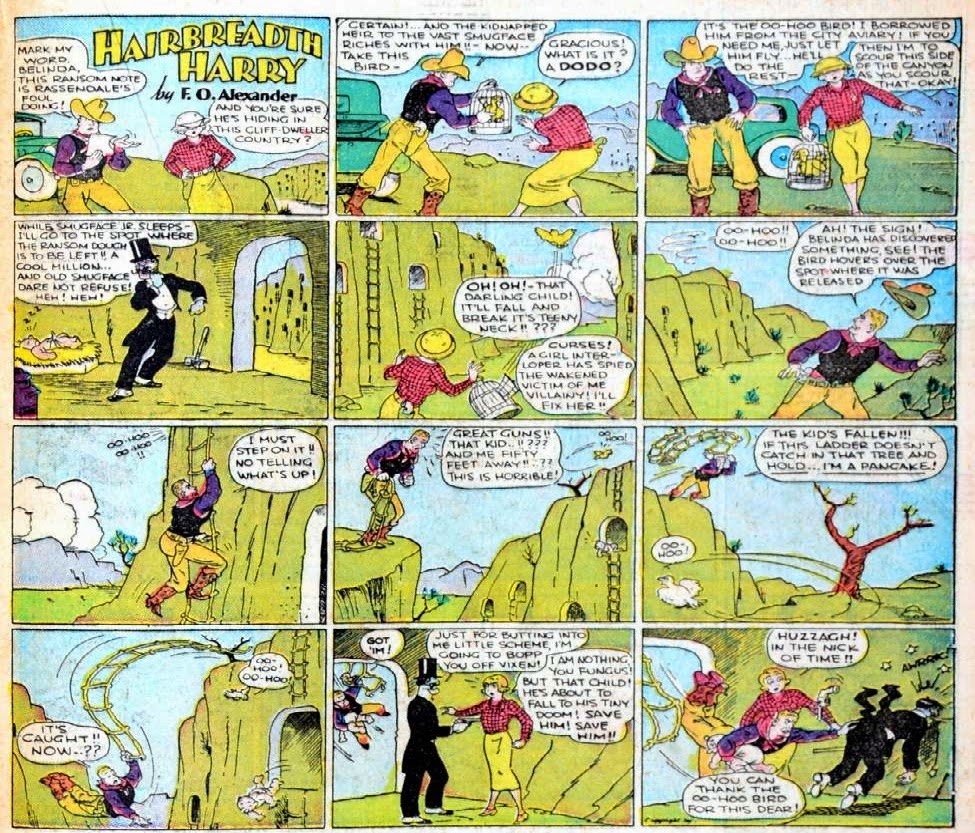 As for Harry's daring stunt, it seems like it would require four different to hit rolls -- one to snag the tree, the second to catch the baby in mid-air, the third to hit the doorway, and the fourth to hit Rudolph.  An Editor might also be within his rights to require a save vs. science to leap far enough first. And a good thing Harry did, too, as it looks like he might have taken up to 6 dice of damage from that fall! 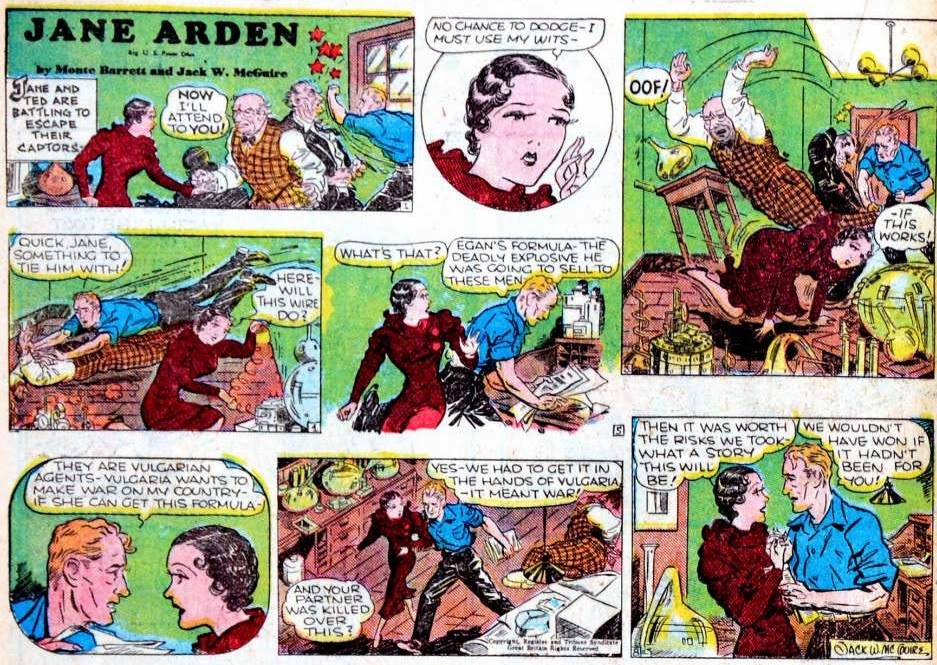 Here, Jane Arden and her Vulgarian friend (perhaps he misspoke, meaning Bulgaria, but was overcome by the romantic tension) demonstrate the unarmed combat arts of punching, tripping, and overbearing. Clearly, unarmed combat rules need to be a big part of any edition of H&H.