Once again I cheat -- I don't have direct access to New Comics #3, but I have this and, if both truthful and taken literally -- offers some insight for Hideouts & Hoodlums.

From "The Train Robbery" serial, we learn that robbers and thugs sometimes work together.  They are statted separately in Book II: Mobsters and Trophies, with thugs being roughly twice as tough as robbers, but with robbers more likely to carry firearms.

The "Sir Loin of Beef" serial centers around the comical use of a slingshot. Because slingshots are so common in comics, the sling will remain a prominent weapon in H&H.

In the "Billy the Kid" serial, Billy learns to fence. Some roleplaying games incorporate mechanics for spending game time learning skills, but H&H belongs to the school of game where you only improve by doing, not by learning.  Not that I am, in any way, anti-education, but this is a game focused on action and adventure, so by pursuing those do you improve your Hero.

The "Knife Ambush" serial centers on following a treasure map. Treasure maps are featured prominently on the trophy lists and make valuable plot hooks as well as trophies. 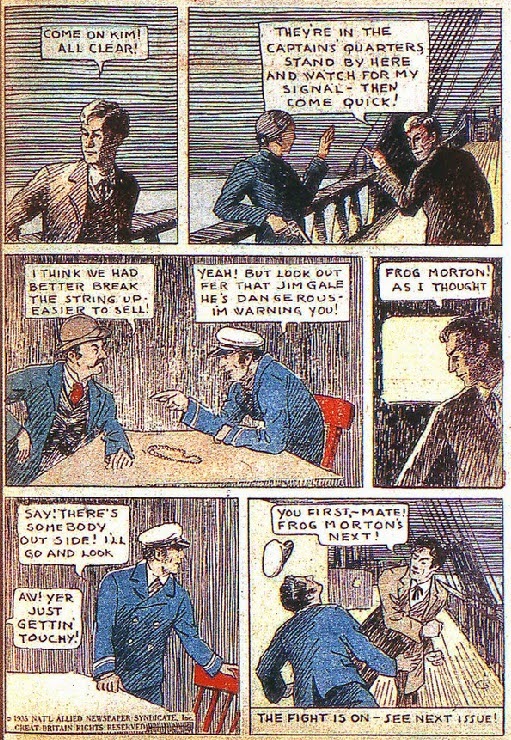 In "The Secret Cruise" serial, Joe searches the captain's quarters for a map.  Joe has a 2 in 6 chance of finding that map per turn. Watch out for wandering encounters, Joe!

In the "Sons of the Red Cormorant" serial, Wing Walker either secured a plane temporarily by using the aviator stunt of Fly, or actually found a trophy plane that he can keep permanently.

I have seen a little more from this blog. In 17-20 on the Black, Jim uses his surprise turn to hear noise, rather than attack.  Sometimes information is more important than an easy victory.
Posted by Scott at 8:28 AM