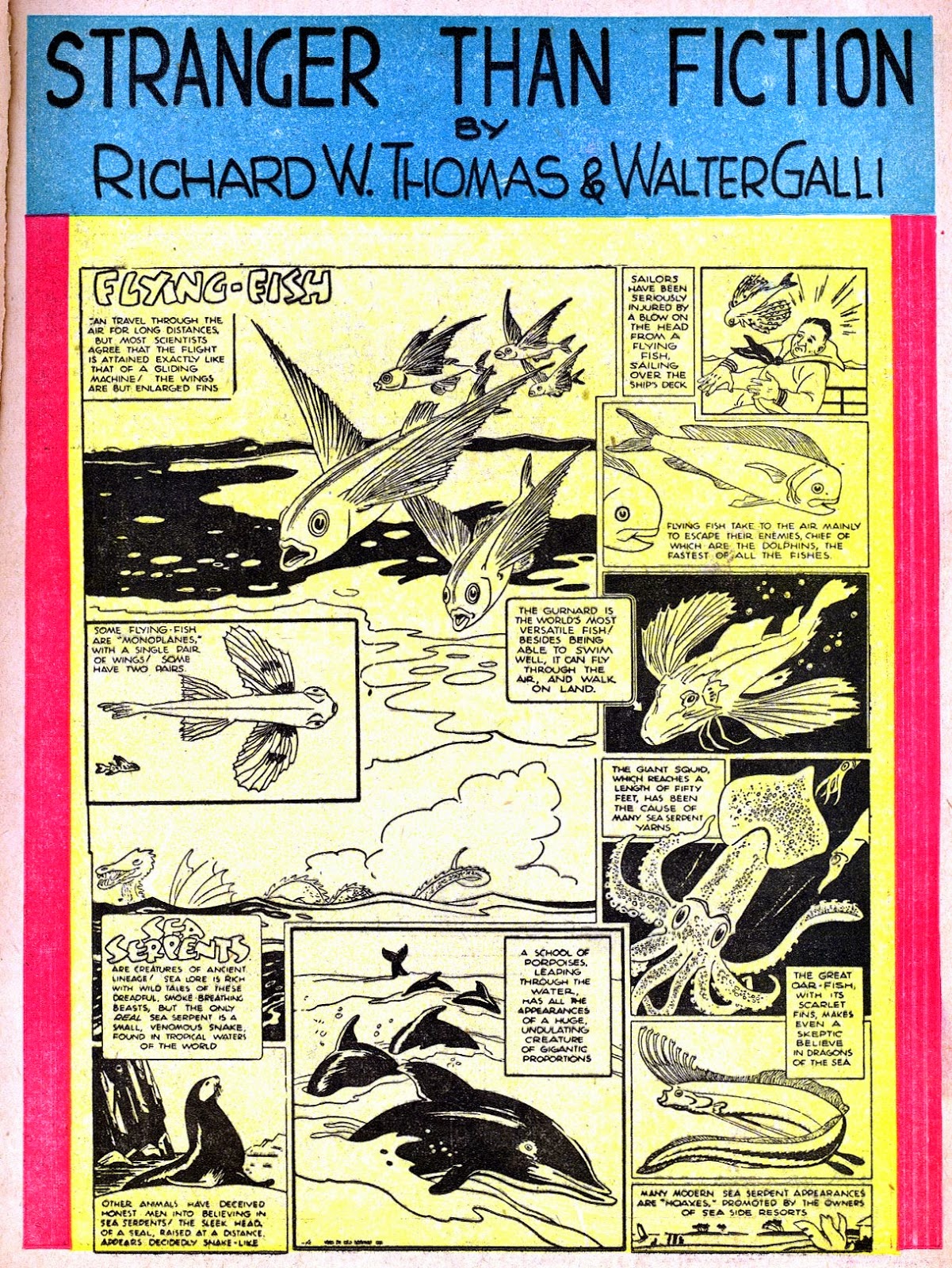 This outing from Dell begins with a particularly useful (to us) installment of Stranger than Fiction. Sea serpents could easily be real in a Hideouts & Hoodlums campaign (indeed, sea monsters of fantastic size are statted in Book II: Mobsters & Trophies), but what if you wanted to run a campaign in a more mundane/less fantastic game world?  Then you might want to consider what all those sea serpent sightings actually are.

Giant squids were statted in Supplement II: All-American.  Seals are not generally dangerous, but some have reportedly been known to play aggressively in ways that can cause harm, such as grabbing a swimmer and dragging him under, or flipping a small boat. I would give a gray harbor seal 2 Hit Dice, with the ability to bite for 1-6 points of damage.  Porpoises are smaller, 1-1 HD, and would only bite to defend themselves for 1-4 points of damage. Oarfish are big, but harmless fish, not important for statting.  Same with flying fish, despite the illustration of one mid-air slapping someone. 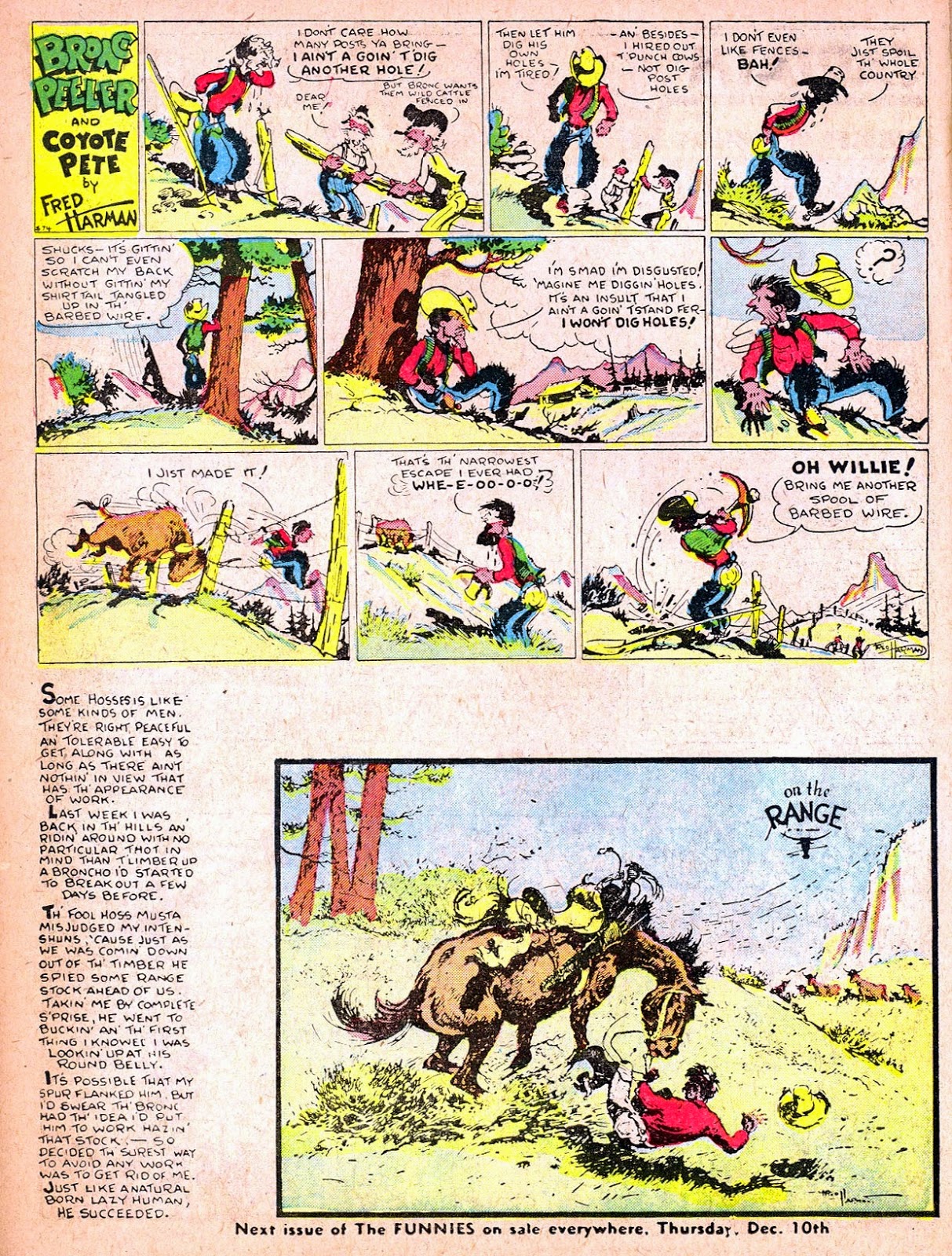 Bronc Peeler and Coyote Pete are reminded of why I statted bulls to have 5 HD here. I would say that a bull could charge and gore for up to 3-10 points of damage.

On the Range reminds us that horses can be dangerous too. Horses should be 4 HD animals, able to trample or stomp on a prone opponent for 2-8 points of damage.  A poor encounter reaction roll from a bronco might make a rider have to save vs. science or be thrown from his saddle too. 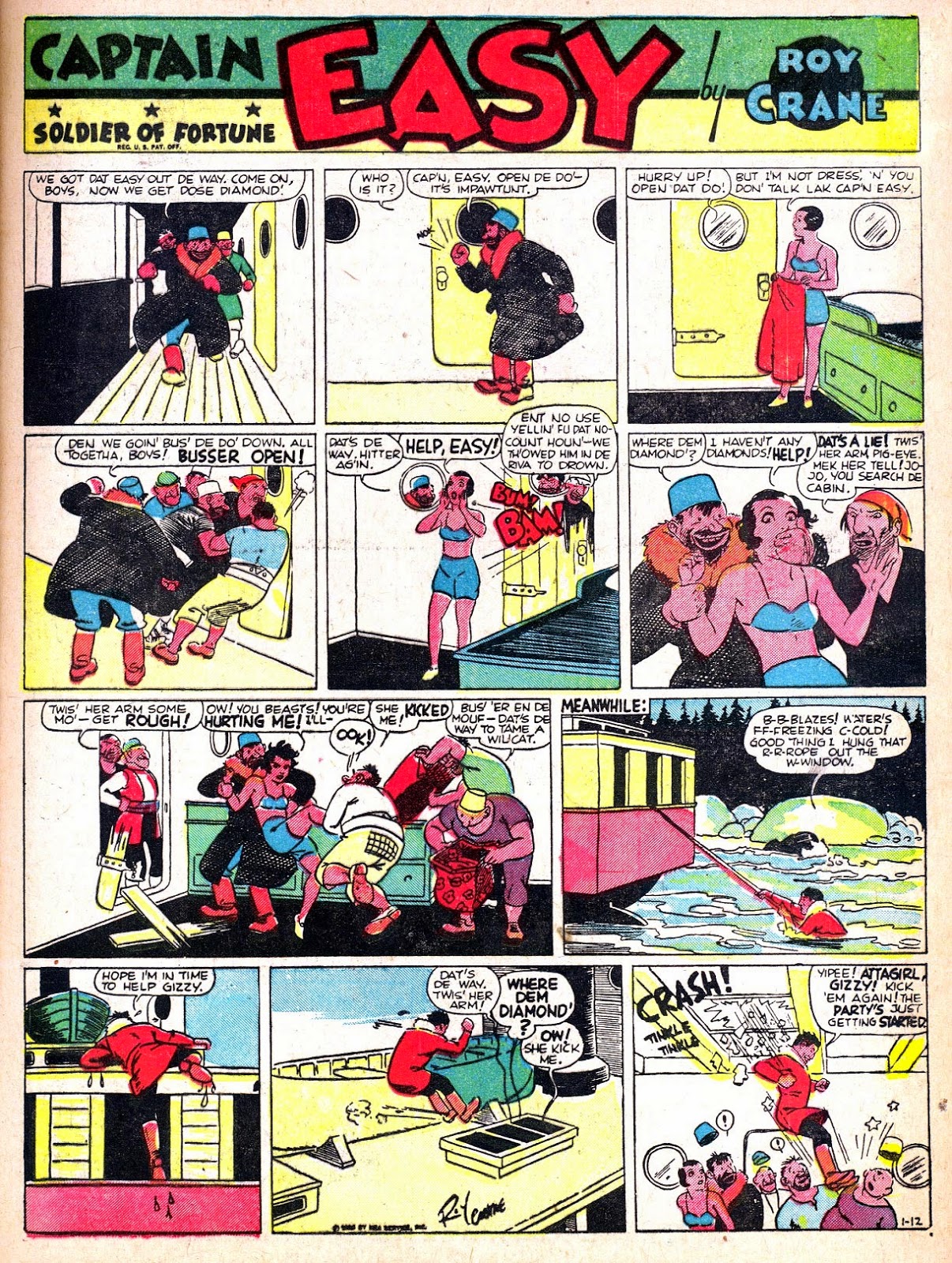 Captain Easy here gives us two playing tips: if you're traveling by boat, leave a rope over the side in case you get knocked (or thrown) overboard. Also, if you're going to attack a group of men with just your feet, try to get the drop on them through a skylight so you get the +1 situational modifier to hit for attacking from above. 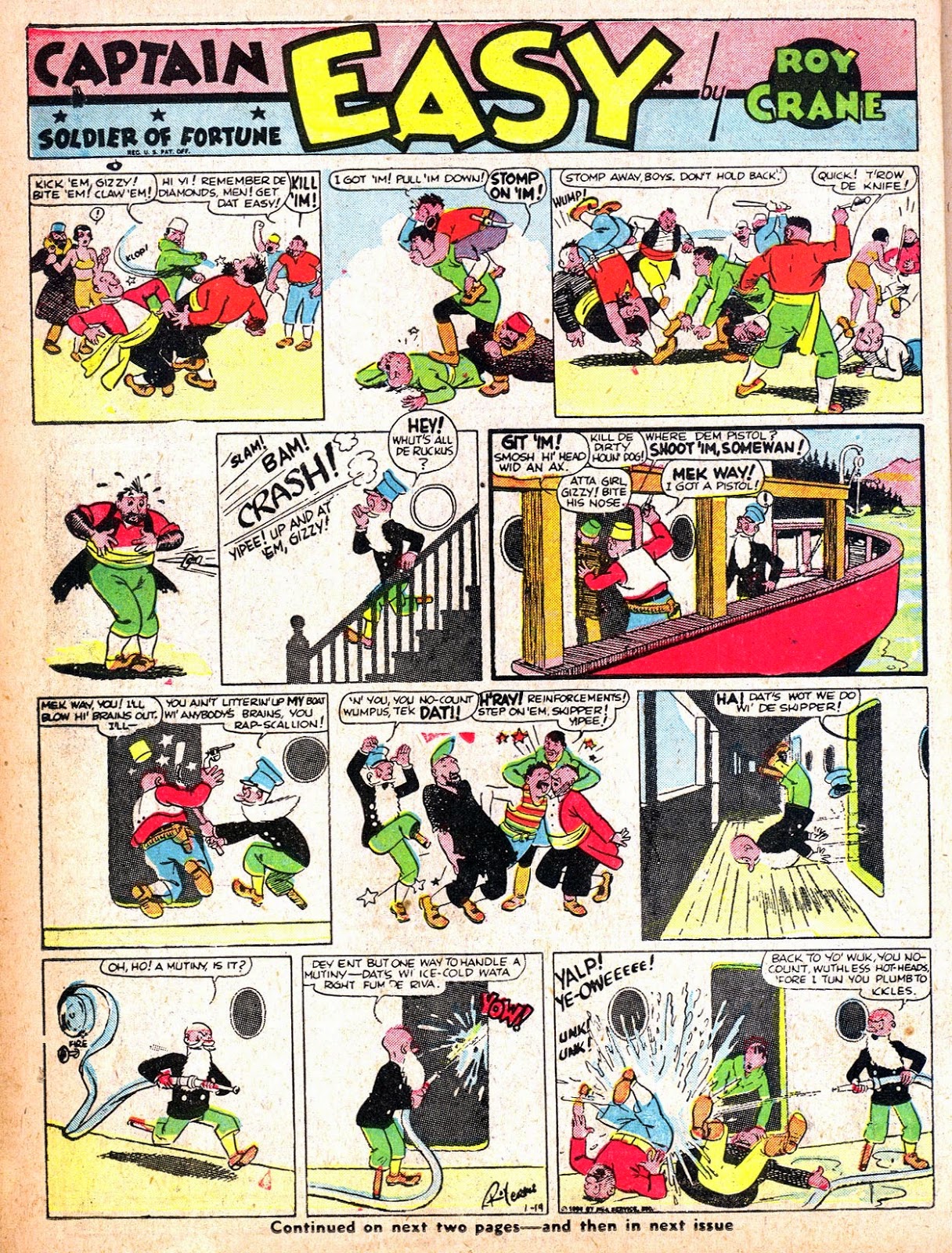 Now this is a complex fight scene, so let me break it down.  In turn 1, Easy gets two attacks with his fist because all parties involved are fighting in unarmed combat. My wording in the combat rules implies that both attacks have to be against the same opponent, but an Editor can be afforded some leniency here. Flavor text can "edit" the scene so that one swing hits both men, but game mechanics-wise, it was still two different attacks.

Also in turn 1, three men at once try to grapple Easy.

In turn 2, Easy goes first and flips one of the three grapplers off of him. This could be done one of two ways: Easy either grappled back and the flip was a successful counter-move, or he attempted a special maneuver and needed to hit his one opponent by 5 or more.  It doesn't really matter which one Easy's player chose.

Using missile weapons into a melee is a dangerous proposition; the rules state that the victim of a successful hit will be a random melee combatant.  In a three-on-one battle, then, Easy only has a 25% chance of being hit by the thrown dagger, assuming the to hit roll was successful.

Firehoses as a special weapon was first discussed here.  It does no damage in this particular instance, but the target must save vs. science or be knocked back 5'. 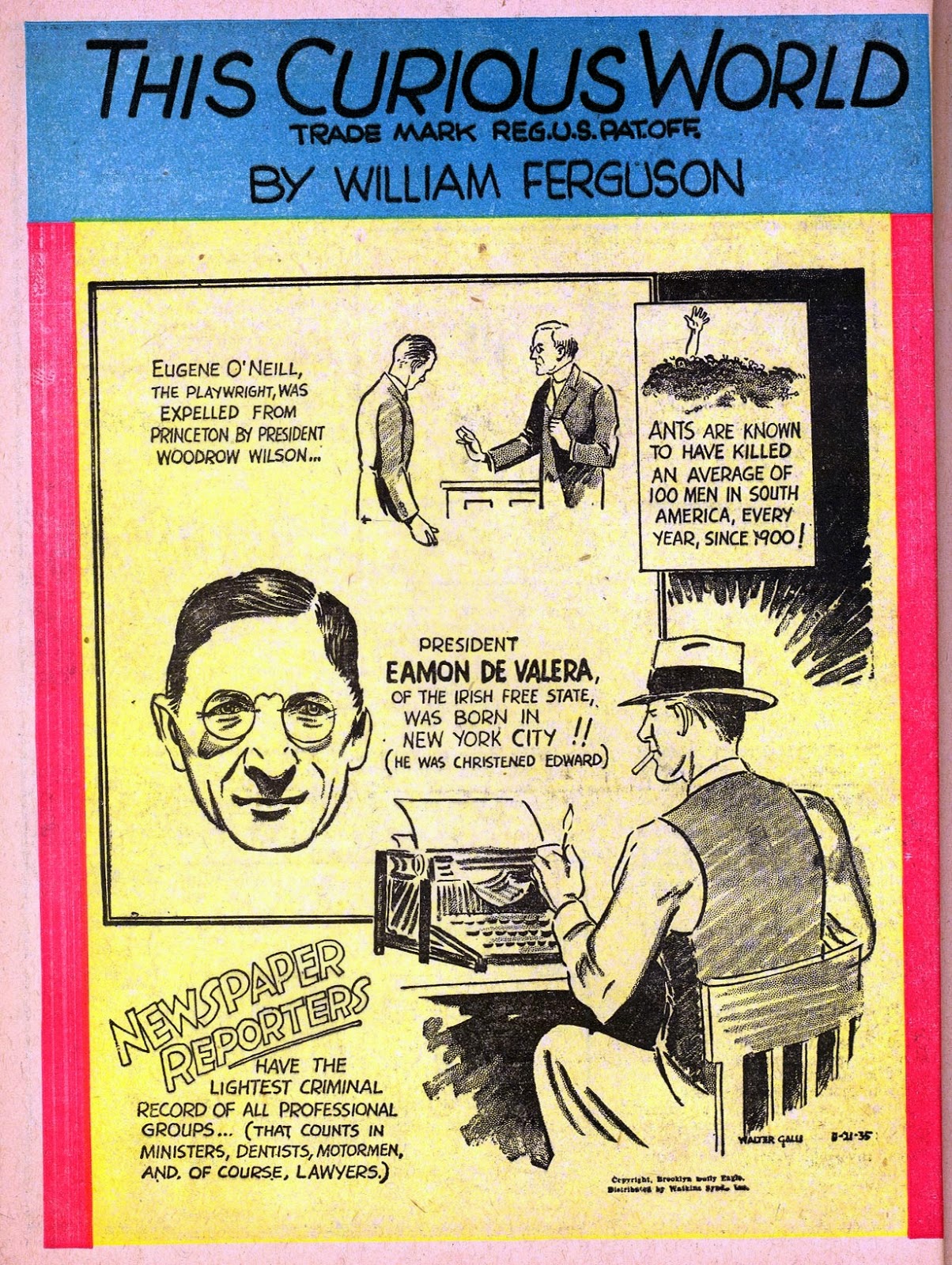 This is still true about ants, though the number of deaths per year is more like 20 now in the 21st century (progress?).  I am hesitant to stat ant swarms as a mobster, though, since ant swarms are pretty slow and easy to outrun. They are more useful as a living trap for victims tied up, buried up to their necks, or unfortunate enough to be sleeping in the wrong place. Let's say the victim would have to save vs. science each turn or take 1-3 points of damage until dead.

The Alley Oop featured monsters are arsinoetherium (an 11+1 HD rhino ancestor), chalicotherium (a 9+1 HD creature, with d12 Hit Dice, that was like a giant horse that could move like a bear), dinotherium (an enormous elephant ancestor with 11+1 HD of the d20 variety!), and dodo (which weren't very big or heavy, so maybe 1/3 of a Hit Die).  Remember that, in a fantastic H&H setting, none of these had to have gone extinct! 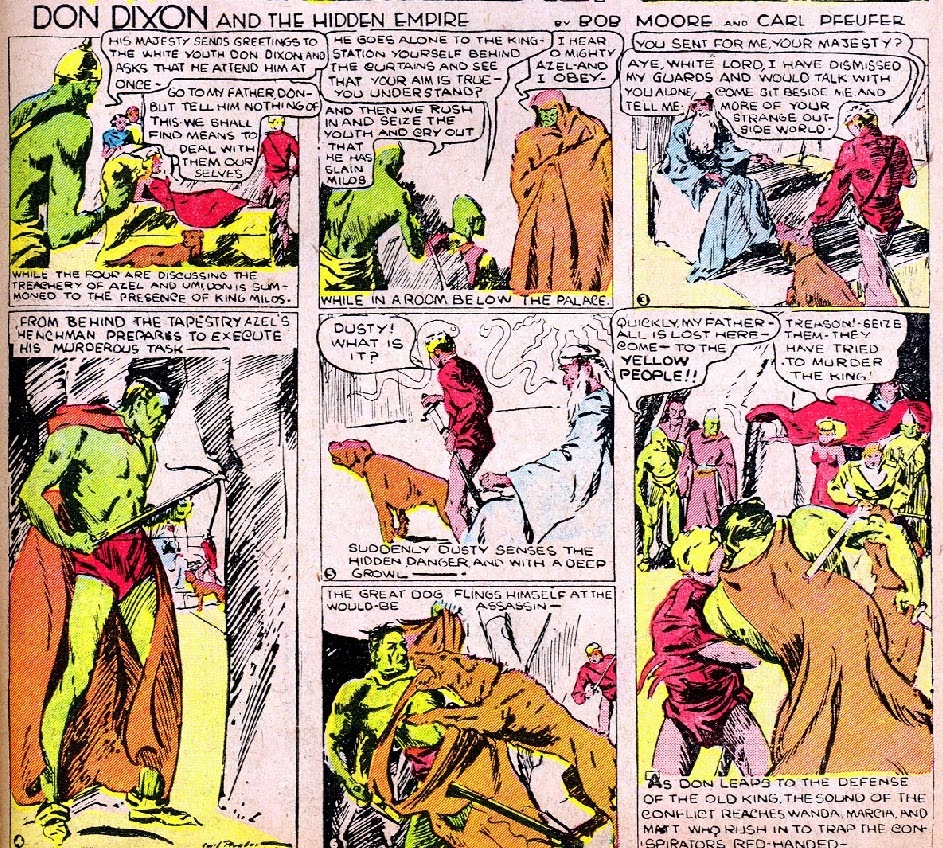 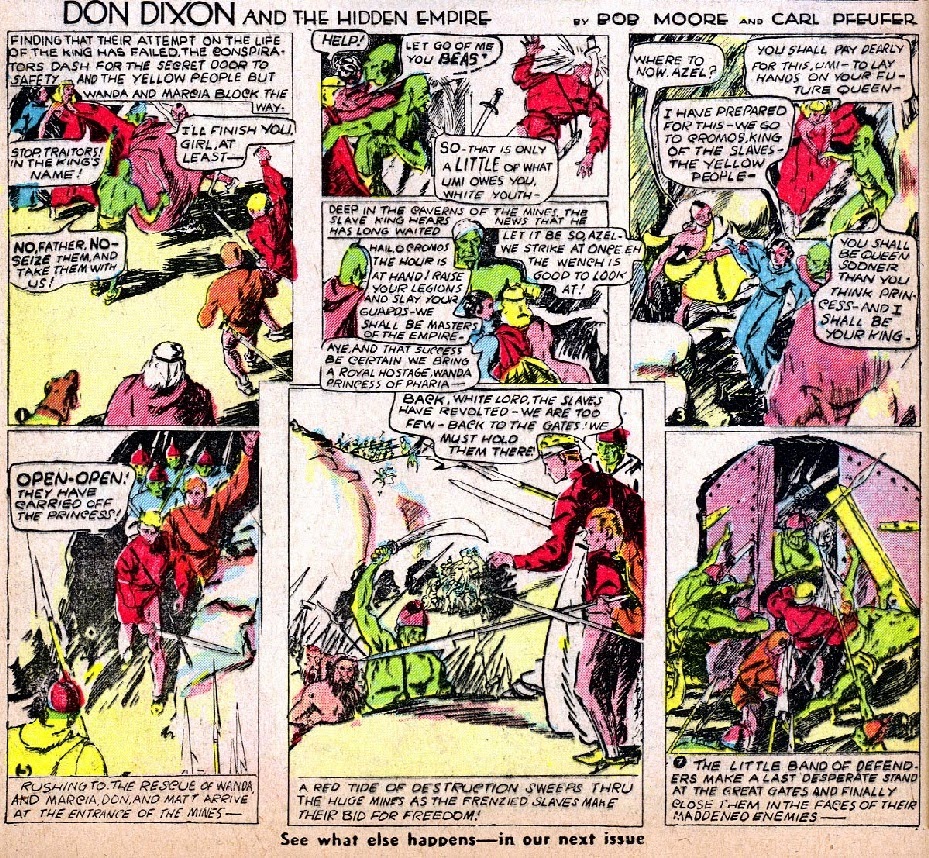 The invaders through themselves at the gates, the defenders throw themselves on the gates to hold them fast -- who wins?  Book III: Underworld & Metropolis Adventures explains that there is a 1-2 chance (on 1d6) of smashing through a stuck door, but that doesn't allow for active resistance or any kind of opposed mechanics. Or does it?  What if both sides just rolled the same die, one for opening doors and the other for closing doors?  The first side to lose the roll-off loses control of the doors/gates.