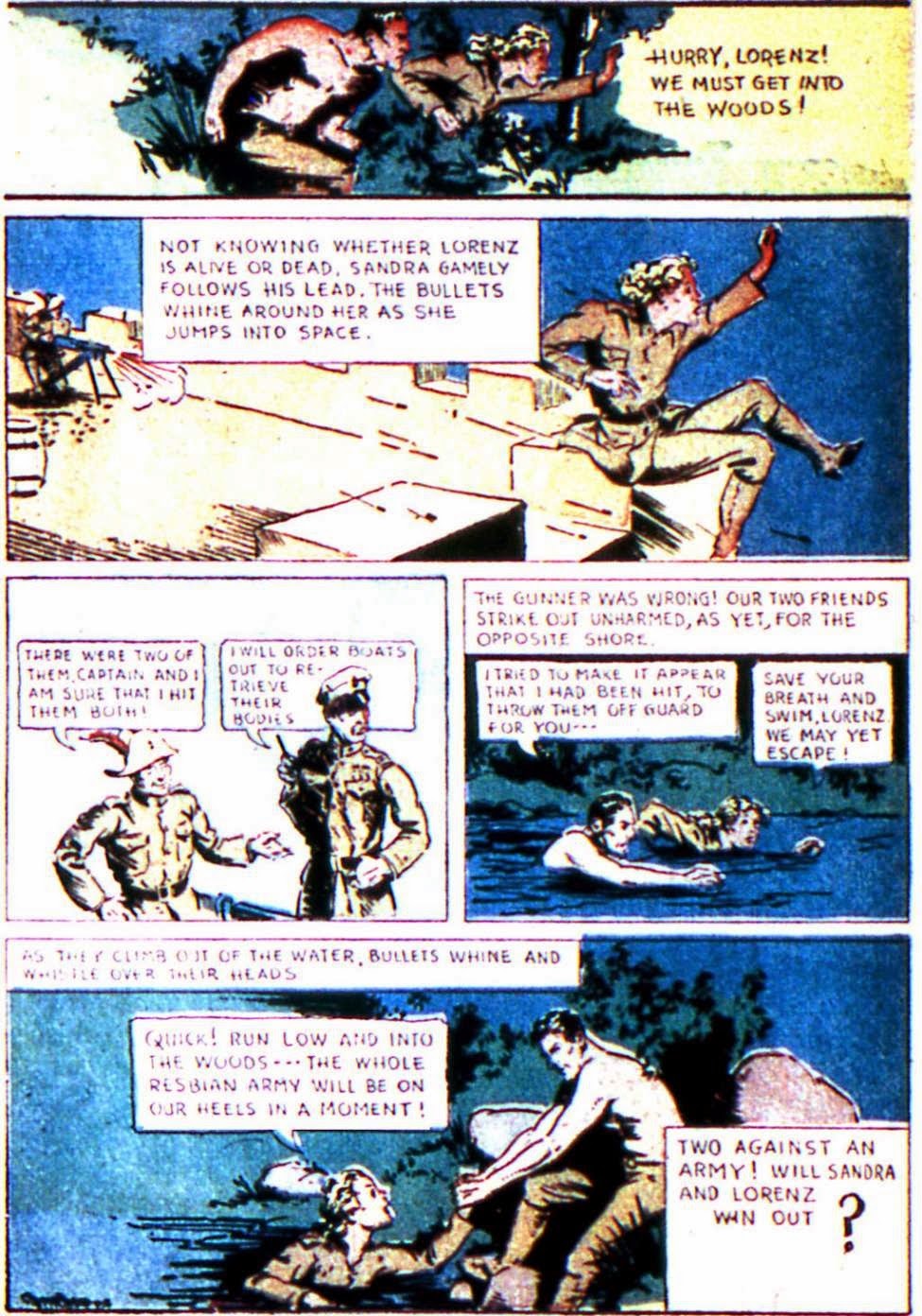 It's the last More Fun of 1936 and Sandra of the Secret Service is dodging machine gun fire!  This is why Hideouts & Hoodlums needs the save vs. missiles mechanic -- because Sandra would be toast without it.

Sandra and Lorenz dive into the moat to escape. The rules cover falling damage, but are less specific about falling into water. Editors are free to hand-wave all damage away, reduce, or minimize damage in any way that makes sense in such an instance. Note that reduced damage is a privilege, not a right!  Heroes need to do all they can to minimize their damage; belly-flopping into the moat just to test the Editor should not be given any reduction.

Look out, Spike Spalding, they're searching for you!  Thank goodness you didn't have to bother with putting points into a skill like Hide just so you could have a chance of remaining a fugitive. In H&H, you just tell the Editor that you're hiding and the burden of finding you is entirely on the mobsters. Most everyone has either a 1 or 2 in 6 chance of finding concealed doors, which applies to concealed people too. Of course, some exceptions to this are the Mysteryman, a class with a higher chance of hiding, and the Magic-User, who has even better spells of concealment like Invisibility.


In this month's installment of Dr. Occult, we learn more about the magic belt that he picked up during his Egyptian quest. The belt is controlled by buttons that are pressed on the belt; one button activates a Fly function (as per the spell) and another button activates a petrification function (as per the gaze of a basilisk).  There is no indication of how many times he can use these functions. It is interesting to note that how the magic belt seems to resemble advanced technology, especially since the villainous Koth's origin on the next page is tied to outer space and a downed spacecraft on Earth in eons past. The implications of combining magic with technology were discussed in Supplement IV: Captains, Magicians, and Incredible Men, in the Dr. Fate entry.

It is even more interesting to note that Koth's origin is almost exactly like Superman's; the difference being that Koth didn't land alone, and his spaceship landed on Earth in the primitive, superstitious past. Had a nurturing society taken in Koth instead of slaughtering his shipmates, he wouldn't have wanted to wipe out mankind for eons!

Midshipman Dewey's Editor has created a bit of a poser for himself. Dewey is tied to a mast; he has cover, but not mobility.  Is he still entitled to a save vs. missiles?  I would be inclined to rule 'yes', but at a penalty. 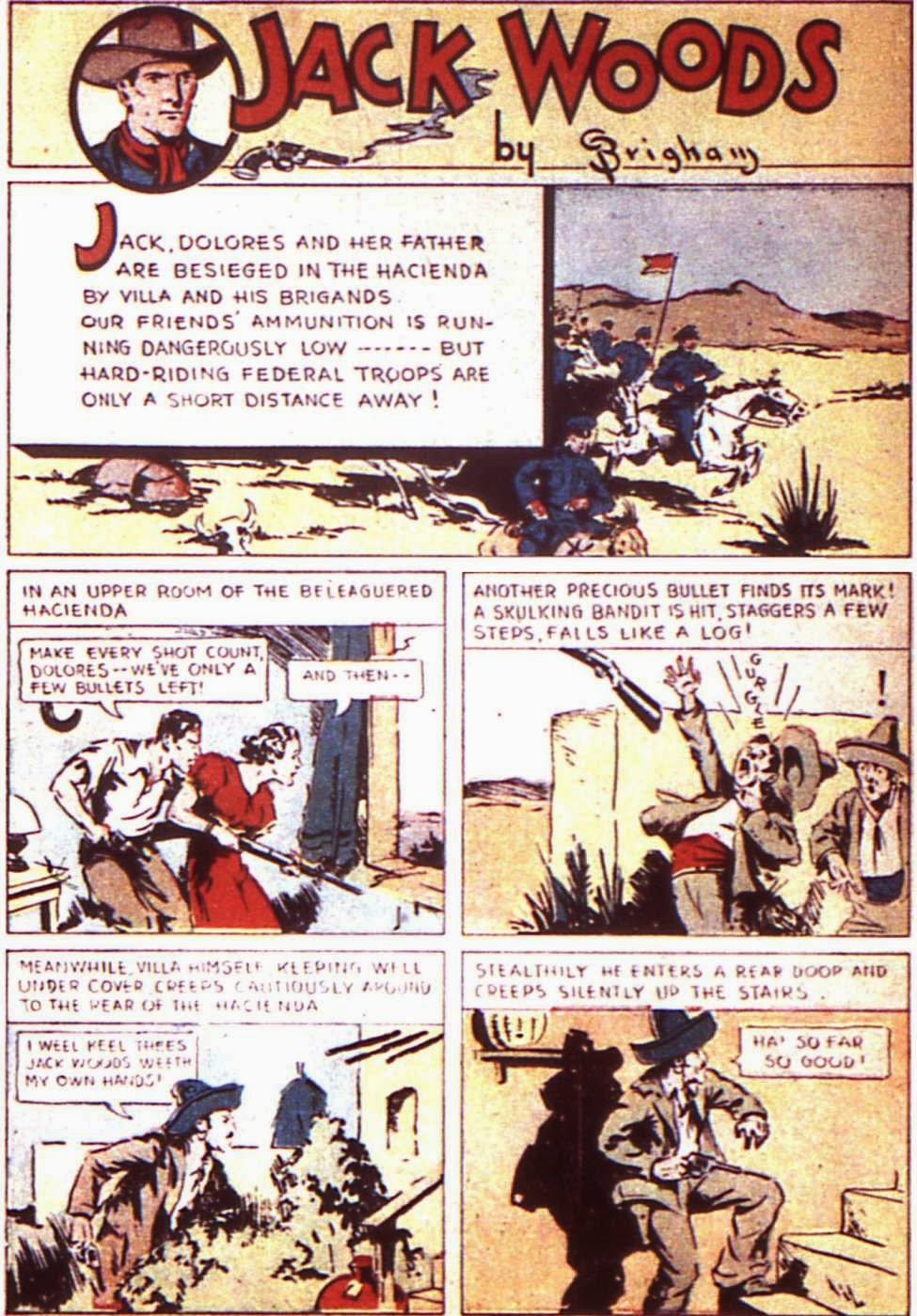 Jack Woods is sort of dealing with a problem I often have when running H&H -- keeping track of ammunition. I am always grateful to the players who do a good job of tracking it for me. For those less fortunate, I have written some tips for "cheating" on ammo tracking in various sources, like allowing a weapon to fire for a random number of turns (determined by a die roll at the beginning of combat).

Note that Villa isn't trying anything trickier than trying to get a surprise attack when he reaches the top of the stairs. He won't have any better a chance of surprising than anyone else would, though he won't have less because he is acting with caution.

Jack demonstrates the Cowboy stunt, Disarming Shot.  In theory, anyone could try this as a special maneuver, but would have to roll 5 or more higher than needed to hit, and Villa would have to miss a save vs. science.

After all the creatures Don Drake has defeated, these guys with whips must be awful good for Don to surrender!  Interestingly, Don, Betty, and Zira are kept prisoner in a room filled with blinding light, so they cannot see to escape.

The rules don't specifically cover shooting through doors, as happens to Sandy Kean here in Calling All Cars, but it could be assumed that Sandy has hard cover and is effectively invisible (so -2 to hit and -4 to hit).