You know, sometimes I have to wonder about the randomness of plot hooks. What if Shock had missed that page and seen a sale ad for washing machines -- is that what this adventure would have been about? More seriously, was that the only plot hook the Editor presented to Shock's player, and he knew he had to bite on it or go home? Or could his player have simply waited for another plot hook...?

It was pretty common for superheroes to wreck things and leave the pieces for others to clean up, but Shock Gibson seemed as likely to use his powers to fix things as wreck them. I'm hesitant to allow wrecking things to be reversed on a 1:1 ratio, but maybe you could reverse-wreck things as if half your level, rounded up?  Either that, or I'd have to introduce a Mend/Weld power.

I wonder, in which week of marching through the desert with the Foreign Legion did Shock begin to doubt the wisdom of his plan? Once he joined the Legion, there was no guarantee they would ship him to the same area Jim was lost in. 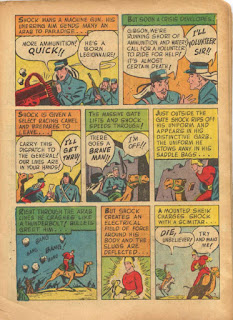 Here's where Shock's Lawful Alignment works against him -- as a sworn member of the Foreign Legion, Shock has to commit murder with a gun, despite this typically being taboo for superheroes. Though, since he's out of costume, Shock can fight as a Fighter, according to 1st ed. H&H rules.

As a superhero, Shock could have "unerring aim" because of the Bulls-eye power, but here it must refer to his better chance to hit while a Fighter.

Shock renders himself Invulnerable to pass safely through the gunfire. No idea why the nomads don't shoot his camel out from underneath him, though.

Here we have a rare occurrence of a non-gun weapon being disarmed (though sword would be the next most common category, if we were using categories).

Shock uses the power Improved Missile Range to turn the nomad into a missile! Rather than picking a target, he just tosses him up so he'll take falling damage.

There's a Dig power that's a powerful, 4th-level power (though a mistake in an early draft made it a 1st-level power briefly). And I feel we still need Dig because I have a hard time accepting that Shock is wrecking his way through tons of loose sand. That would take a very charitable definition of wrecking, since Shock isn't actually damaging the sand in any way.

This last sequence was one of the reasons for the No Encumbrance power in 1st edition. I've lost it in 2nd edition...so this might have to fall under Raise Car now.

Shock tosses away his gun for it "only gets in the way" is the correct superhero attitude towards guns.

Less clear is what power Shock is using while he charges into melee. It could be Flurry of Blows; though he doesn't appear to be actively punching, he does hit eight targets in quick succession. Or, he could be using Blast II and hitting them with an area-effect power, though he can apparently then center Blast II on himself and take no injury from it.

This is peculiar -- for three days Shock chases his quarry, but never once prepares a power that would let him move faster. Now, in previous issues, we saw Shock able to fly pretty fast, but that doesn't seem to be the case here. How was Shock not able to prepare new powers over the course of three days? Is it because he had time to take no rest?