We rejoin Yarko today in the lair of vampires!  It's never clear how many vampires are in this lair, but this page shows there are at least four.

That clever Yarko cast Resist Fire and Protection from Missiles on himself before entering the room.

The clearest evidence yet of the "contest of wills" game mechanic. At first I was leery of including this in the official rules, but even considered putting it in an optional appendix to the 2nd edition basic book. But, as of now, it's right in the combat section.

I'm not sure what spell is being cast here. Stone Shape? Earthquake?

It's also worth noting that the true appearance of vampires is that of a gruesome monster, and they can only make themselves appear to be handsome men or beautiful women. 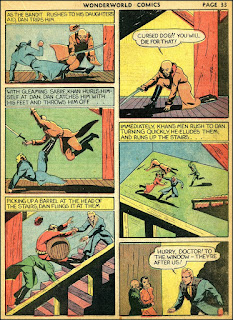 This is Dr. Fung and Dan, the full-grown sidekick who doesn't get title billing.  Here, Dan is in unarmed combat with a Genghis Khan-type. Genghis Khans were a mobster type in 1st ed., though I'm really not seeing anything too special about these characters, upon closer reading. Dan is really kicking this guy's butt, or just literally kicking him (the first kick is actually a trip attack and is treated as grappling).

I've posted many times about fighters using combat machine for multiple attacks, even when it doesn't appear that they are.

I think I've already covered the tactic of using stairs to one's advantage in a past post. For a heavy weight like this barrel, I might allow it to roll over the first opponent and possibly knock down others; it's not multiple attacks so much as setting up a trap on the stairs. The first target would get to save vs. science to resist, with each subsequent target getting a +2 bonus, and whoever makes the save stops the barrel.

You can't recognize K-51 in that diving suit, but that's him getting his butt kicked by an octopus, and apparently not even of the giant variety. I'll have to remember to add a note to the giant octopus entry about what Hit Dice ordinary ones would have.

This is also a rare instance of a hammer being used as a weapon, without the wielder being named Thor.

This is Mob Buster Robinson, also getting his butt kicked -- though we've already established that head blows should do more damage in a surprise attack.

Robinson observes the man in the mirror because of an unlucky set of surprise rolls for the hoodlum.

This is lousy hideout design. Who puts trapdoors in prison cells? Especially trap doors that lead to underground streams that lead out of the hideout?

This is the first time we've ever seen a gun not work because it was wet.

Rocking the boat caused the thug to save vs. science or fall out.