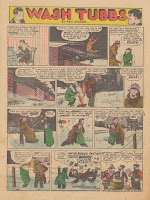 Those are some pretty tough hobos at the end. Murder hobos?  I may have to stat hobos yet.

Pirates were in Book II: Mobsters & Trophies.  I've already written up monkeys for 2nd edition. Hermits might be a thing I need to stat someday.

Disguise is really easy for Heroes. Throw a bear rug on your back and you may convince people you're really a bear. 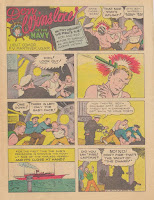 Don Winslow is not lucky on this page. First he gets taken down with a wrench to the head. The wrench was thrown into a melee, so if the attack had missed, there would have been a chance of it hitting someone else.

Red not only gets overborn by the bad guys, if you look closely, it looks like only one mobster overbears him. The other two are doing what, pinning down an unconscious Don Winslow? It looks like the Editor decided to roll randomly to determine which Hero each mobster attacked.