We've already seen underwater entrances to hideouts, but this scenario has a twist on that -- the entrance is only visible for a few minutes while the tide is lower. 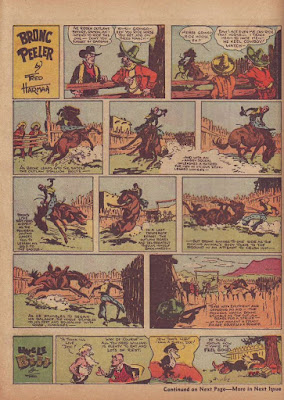 I'd say a horse throwing its body to the ground in an attempt to crush someone could do a lot of damage?  But how much?

A 180 lb. man falling on top of you might be uncomfortable, but I can't see it being able to knock anyone unconscious (not from weight alone, though you could factor in other possibilities, like an elbow strike while dropping).

But an obese man, let's say 210 lbs., maybe that alone could hurt you if that much bulk fell on you. Let's assume that a horse weighs 1,000 lbs.  If a 210-lb. man can do 1 point of damage, then a horse should only be able to do 1-4 (actually, it should probably be much higher, but recall that H&H game mechanics are incremental instead of exponential). Rounding up for other considerations (the continued movement of the horse, the length of time it crushes), 1-6 points of damage would not be unreasonable -- exactly the same as the default damage for weapons in H&H.

H&H allows for firing missile weapons into melee, though at the risk of hitting a random other target if the initial target is missed. In this case, the shark is certainly in melee range already, though because of the order of combat it will not get its melee attack until after being shot at. Both the shark and the damsel in distress have soft cover from swimming most under the surface of the water, so Tommy better be a lucky shooter...

Binding wounds does not figure into the early drafts of H&H rules, but two versions of house rules have entered the game since. One is that binding the wounds makes hp recovery happen twice as fast. The other gives you an immediate 1-3 hp back.  Each Editor can decide which, if either, rule to use.