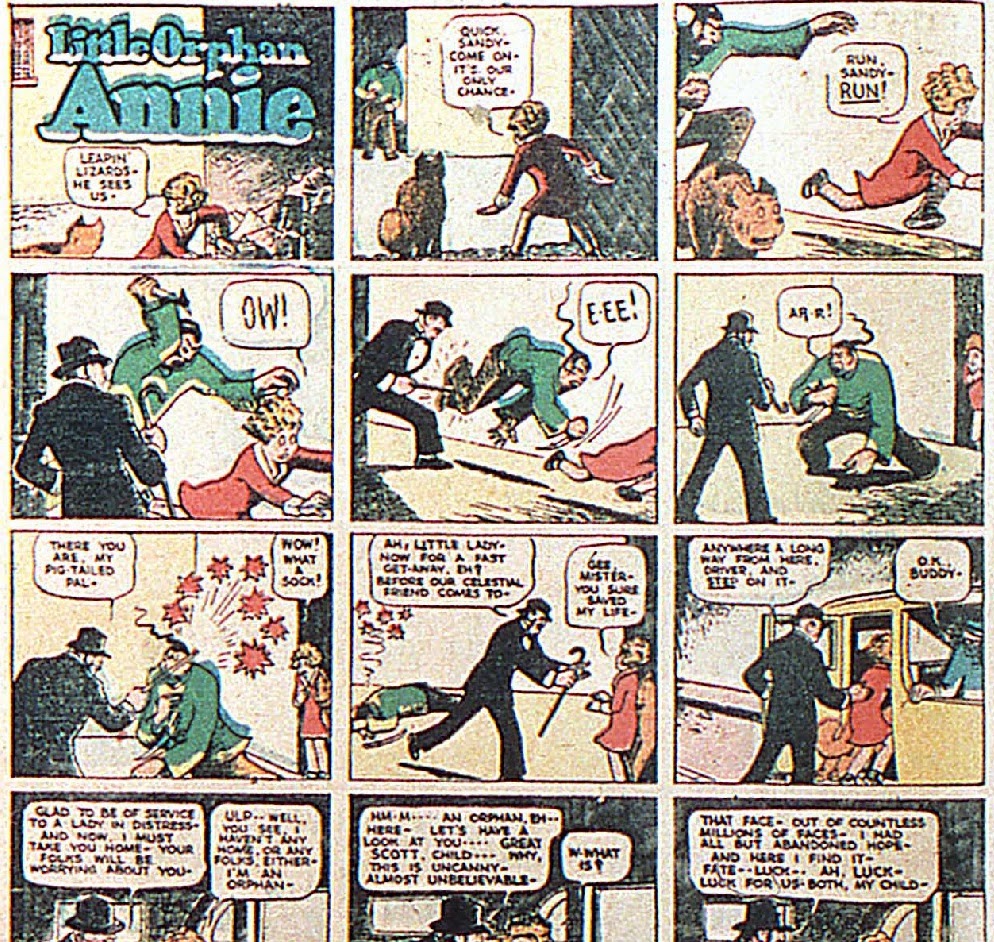 This page of Little Orphan Annie actually illustrates two issues about how combat should work in Hideouts & Hoodlums. One, is that combats should be short. If a cane does 1-6 points of damage, and most people have 1-6 hit points, then a one-on-one combat could conceivably be wrapped up after just two dice rolls (the to hit and damage rolls of the first attacker).

But who should get to attack first? The man with the cane or the man with the knife? Originally, a random die roll determined this in H&H. Another option would be to have attacks go in descending order by the Dexterity of the combats; this was seriously considered for the next edition. But what is more likely going to happen is going by weapon length, with the reach of a cane giving him the advantage over a hoodlum with just a short knife. 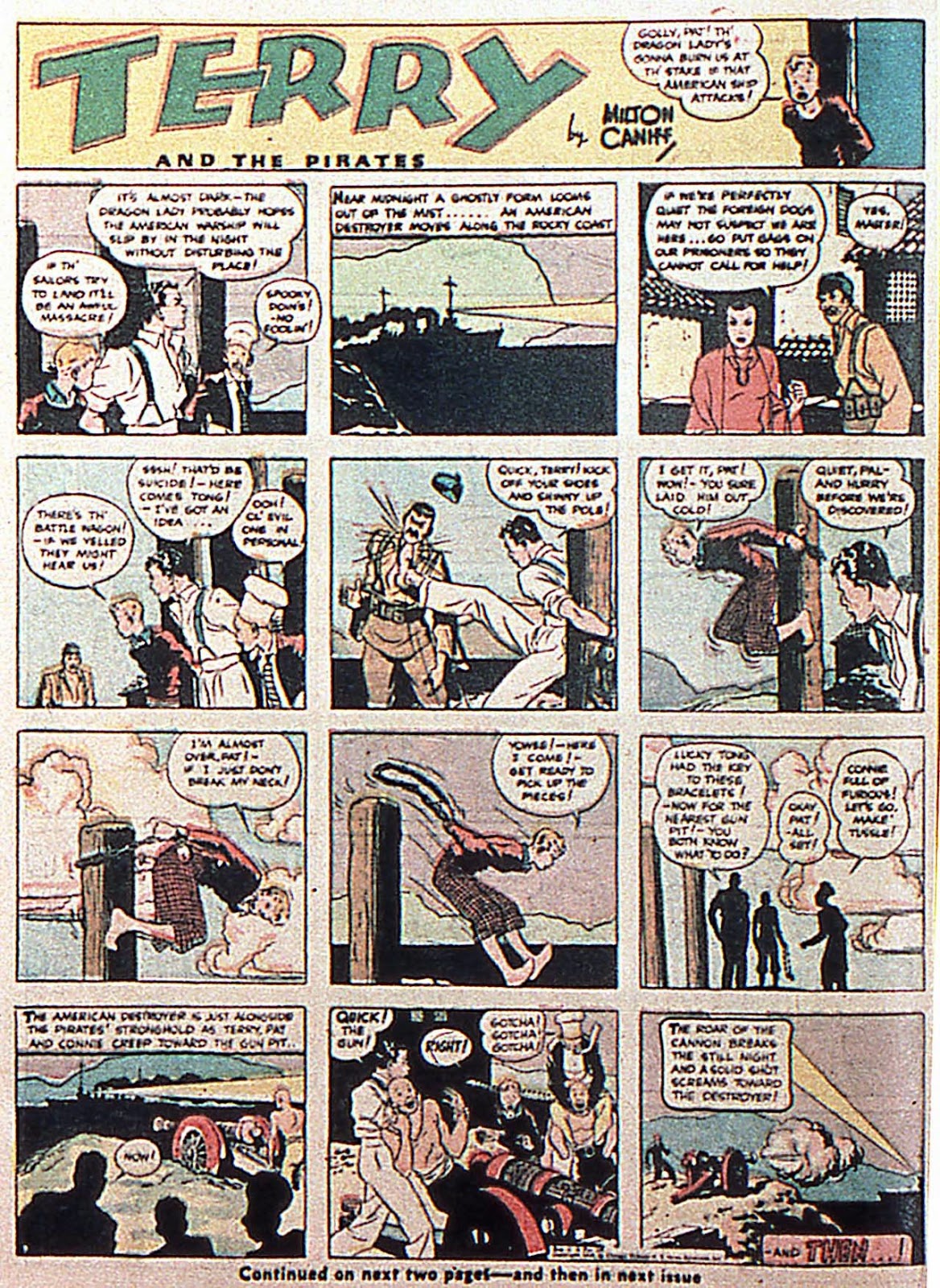 In this page of Terry and the Pirates, I'm less interested in the combat than Terry's agility at shinnying up the pole. What is going on there, as a game mechanic? Some game referees might use an ability score check, having the player roll under his Dexterity score to succeed. Officially, H&H does not incorporate ability score checks.

Could this be a simple exercise of a climb mechanic instead? This brings us back to the same issue, already brought up on this blog, about whether Climb should be a Stunt that only Heroes can use, or if it should be a skill that anyone can accomplish.

But what mechanic could everyone use? Since Terry is using resistance to counter gravity, could this perhaps warrant a save vs. science?

Ah, the old blow-to-the-back-of-the-head trick. Later, even some superheroes would not be immune to this plot convenience!  But what is going on here, game mechanics-wise? Is Pat down to his last 6 hp or less (which is possible, considering how slow healing is in H&H) when he takes the clubbing blow? Is the Dragon Lady a Mysteryman using her signature move for additional damage? Or should there be a mechanic specifically for head blows? I'm actually leaning towards the latter! 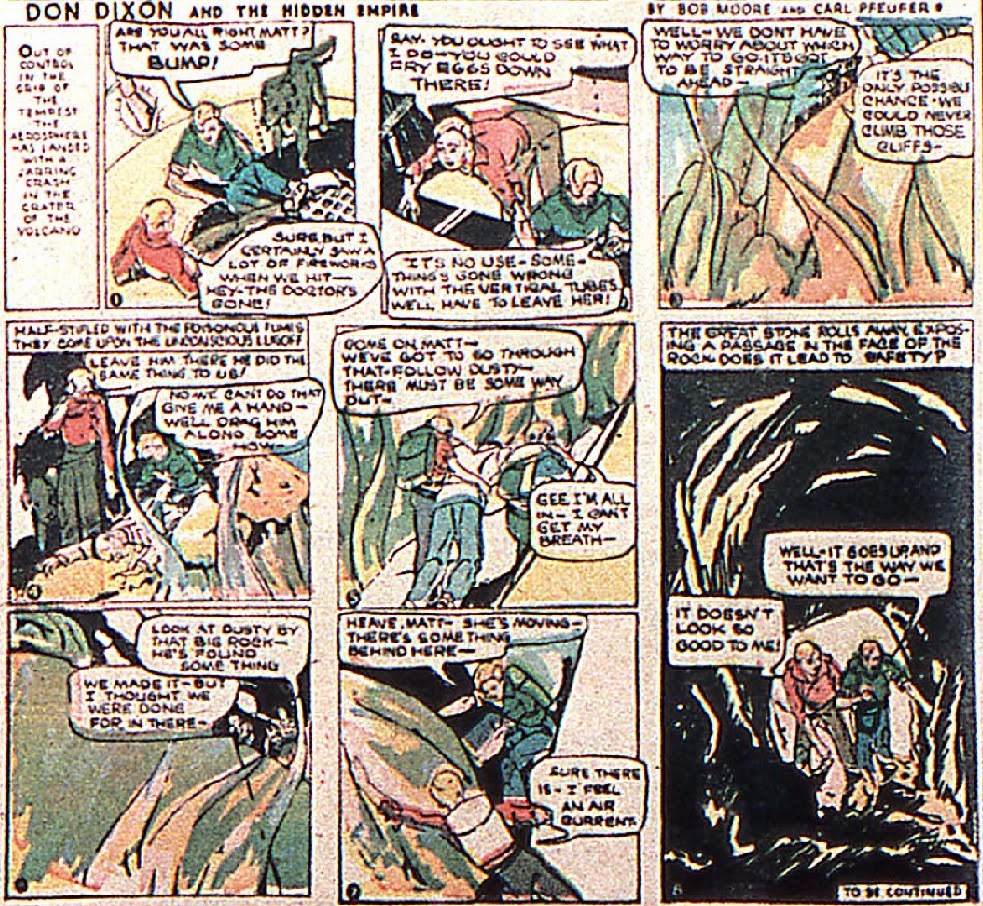 Don Dixon and the Hidden Empire brings up several points. One is the usefulness of bringing a dog along on an adventure. It gives you an extra chance to find concealed things and -- horrible, but practical -- another target for bad guys to aim at.

Active volcanoes are not Hero-friendly environments for adventuring. As this page shows, the combination of the heat and poisonous fumes should require a save vs. science each turn from anyone in the volcano, or they will pass out for 1-4 turns.

But more importantly, by what game mechanic are the kids moving that boulder.  A save vs. science to overcome the inertia of the boulder? Or an ability score-like check vs. Strength? In the spirit of Old School arbitrariness, I'm actually leaning towards the latter for the next edition! This way, you could modify the number of dice rolled depending on how heavy the weight is. 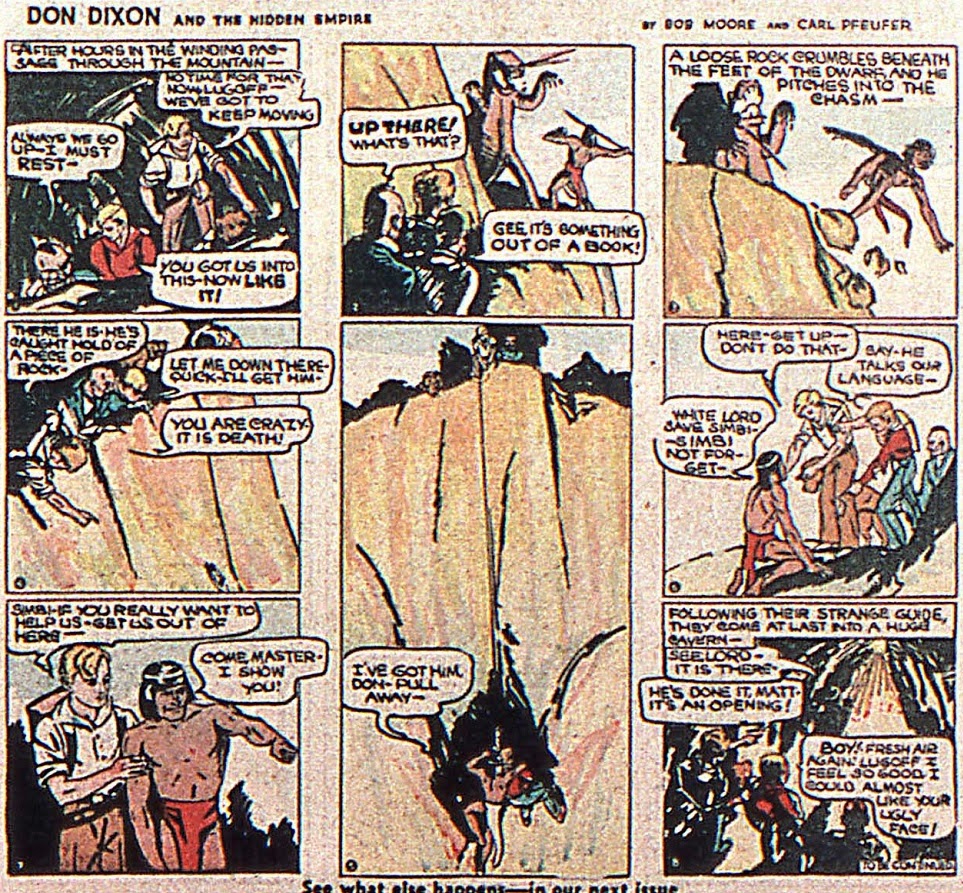 First dinosaur in a modern day story!  But what dinosaur? It's a man-sized carnivore. Maybe meant to be a young Tyrannosaur? An associate of mine (hi Dan!) suggested to me that it could be a young Allosaur. Either way, at this size it probably doesn't have more than 4 Hit Dice.

Also the first mention of dwarfs in a comic book, though this dwarf seems to be a pygmy and, thus, statted as a Native rather than a fantasy humanoid.

Yeah...don't go into a scenario involving a tiger, thinking that you can say "over" while waiving a stick and subdue the tiger; I think we're to assume this works because Sylvia has a history of working with this particular tiger.

More evidence of the importance of accounting for lassos as a weapon.

And $100 seems to be the going rate for returning a lost tiger to a circus.