Tailspin Tommy is on one of those unusual tropical islands inhabited by gorillas. It seems to be a herd (is herd the word for gorillas?) of eight apes, which is pretty high and decidedly dangerous should they all turn hostile. The reference to a "big leader" is unspecific. It could be interpreted to mean "giant ape", but the art doesn't seem to support that. Perhaps it's just an unusually tough ape, with an extra Hit Die.

Here, the text describes Don Dixon's supporting cast as petrified, but they are not colored as if stone. What is more likely is that they are paralyzed, by a spell like Hold Person.

Kestra's Mirror of Time is a powerful magic item/trophy, if it's really depicting the future. Of course, this is very hard for Editors to do in a campaign that is not being railroaded towards a specific goal, and impossible in an open-ended or "sandbox" campaign. The Editor would have to keep precognitive visions in those situations deliberately vague.

There is no precognition spell and, for the reasons above, I would not recommend it. If a Mirror of Time was allowed in the game, I would set some limitations on it, like only usable once per week by Magic-Users. 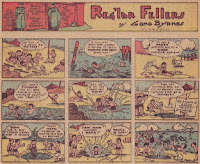 (Scans courtesy of Digital Comic Museum)
Posted by Scott at 11:15 AM