This month's issue from Dell Comics starts with some Dick Tracy, that you won't be seeing here, but these pages include a disreputable parson selling marriage certificates for just $2, and what appears to be surprise rolls used to determine if two cars can pass each other without spotting each other. There's also a nifty trap where stepping on a concealed buzzer by the far wall causes a pit trap to open up in the middle of the floor. 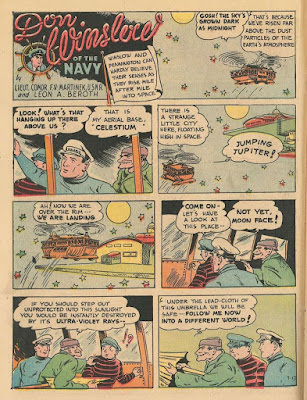 Now, onto the pages I can show you! Don Winslow is having a sci fi adventure here, involving an orbiting platform in the mesophere, 30 miles high. Now, the science seem really wonky here. We know, today, that the ultra-violet light at that altitude is not lethal. But we actually haven't seen that happen yet, we've only been told that by the villain. Players should treat information like that with caution when they receive it in-game because you never know when your Editor will use real world or comic book world science!

Behind this is the dilemma many RPGs face over the difference between character knowledge (what your Hero would know) and player knowledge (what the player knows). It is really up to the Editor who big an issue he feels this is. If playing just for fun, then it doesn't really matter, but if historical simulation is an important aspect of game play...then the Editor would be within his rights to make the Heroes save vs. plot in situations like this, with a failed save meaning the Heroes cannot benefit from player knowledge! 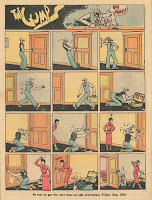 This page of The Gumps deals with a subject that's pretty important in hideout exploration -- opening locked doors. Anyone should be able to open a locked door with the right tools and enough time, as Andy Gump is shown trying here. Opening a locked door quickly, or without the benefit of specialized tools, can only be attempted by a Mysteryman -- or by other classes if stunts are allowed to other classes -- except if a hairpin is used. This is such an old cliche of fiction that anyone should be able to unlock a door with a hairpin if they save vs. plot. 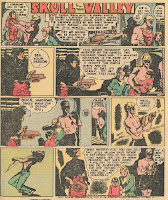 Hard to believe Skull Valley started out as a cowboy strip!  Here, White is more like a masked vigilante, but the real surprise is seeing a repeating crossbow as an early weapon in comics!

Catching arrows in mid-flight is not an ability I'd like to put into the hands of ordinary fighters...but if it was just an ordinary miss, colored with some flavor text by the Editor, then there's nothing wrong with that.

The last issue here is the million dollar "opium princess". Should rescuing someone always be worth 100 xp, as a good deed, or should more valuable people be treated like trophies, and worth their value...?