Unfortunately, it's not a big one, as I don't have more than a portion of this issue available to me to read.

It starts out with our second of many Will Eisner stories I'll be looking at.  This one starts with a map!  There's not much to it, but it might help with a Mythic West-themed campaign. 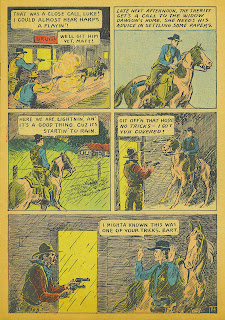 Now, in the average Hideouts & Hoodlums scenario, if a bad guy draws two pistols on you, your first inclination may not be to surrender.  He still has to roll to hit, only has a chance to hit with one of them, and then you still get a save vs. missiles to dodge, right?

The first two of those three reasons are legitimate excuses for an Editor to ask for a save vs. plot from Heroes to avoid surrendering.  Some players might balk at this, but it is VERY comic book-ish.