Before Captain Easy had his own strip, he was just an adult sidekick to Wash Tubbs.

Easy is also in a car with a ridiculous amount of nitroglycerin; I hate to estimate how much damage that explosion would have done to the poor guys had their car been hit by that TNT!

At present, there are not specific game mechanics for unarmed combat moves like flipping your handcuffed opponent over your head -- this would simply be a generic grappling attack.

This is from In the Name of the Law, a cheap knock-off of War on Crime.  In it we are reminded that, while a Hero's chance to hear noise might not work through hideout walls, it should work through ordinary interior walls in buildings.

Tom Mix learns, the hard way, how to burn down a wooden cabin (though most Heroes will avoid burning down a hideout, for fear of destroying valuable loot inside!). 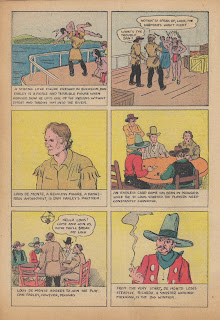 Prairie Bill's feat of strength could be achieved a couple of different ways, both starting with successful grappling rolls (very successful; I plan to switch to a grappling system with more than one level of success).  The Editor could then allow the grappled victim to save vs. science to keep from being thrown in the drink.  Alternatively, if the Editor could leave the successful grappler in control of the next step, by having him roll to-hit the water -- AC 9, let's say.

Gambling, whether a friendly game or not, is beyond the purview of simulating with Hideouts & Hoodlums.  The easiest way of handling it, of course, would be to sit the H&H books aside for an hour or so and play some hands of poker yourselves.  Failing that, or if pressed for time, the players could simply roll d20s, highest score wins that hand.

G-Man Jim demonstrates the proper way to use a wireless radio to summon reinforcements.

Though drawn in a horribly unprofessional manner, G-Man Jim has all the earmarks of a classic H&H hideout crawl.  There is a definite goal to the scenario -- find the missing girl -- but lots of rooms to search, including a secret room to find. There's even a trap -- a button that will set off an explosion if pressed!

Again, we have a poorly drawn, but evocative scenario in The Arizona Kid. Just riding by and finding what appears to be a guarded well, but is actually a mine entrance, Arizona descends into a subterranean world that...well, it wouldn't be very H&H, but I wouldn't be surprised to see orcs or goblins show up down there. 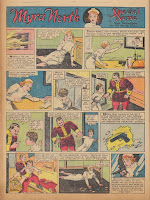 I'm not sure how literal to take Myra North's description of this gas. Does she feel weak from the gas, or is she really, physically weakened by it? A weakness-inducing gas might be an interesting trap, though since there are not actually a lot of game mechanics tied to the Strength ability score, it might wind up only affecting flavor text...unless it was also tied to Movement rate.