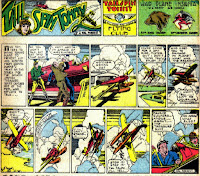 A long-standing trope of the action adventure genre (of which one could argue even the superhero genre is just a sub-set) is that prisoners can be intimidated into giving up valuable information. Here, Tailspin Tommy takes an unusual aeronautical approach to this, while taking advantage of the fact that his prisoner is afraid to fly.  Without that disadvantage, it seems unlikely that loop de loops would trigger a morale save. 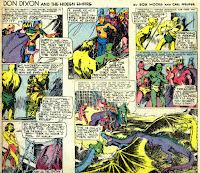 The people of the Hidden Empire call these terods (or is that teroos?), but they look an awful lot like dragons to my trained eye. 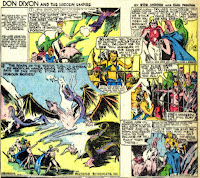 Since terods breath poison gas, it seems safe to stat them as green dragons, despite the fact that they seem to come in every color but. They are defeated, not by Don Dixon, but by the magic ring worn by one of his supporting cast. It is unclear exactly what the ring is doing, but it seems to be a Ring of Light Rays that shoot like lasers (for at least 4d6 damage, I'd guess). 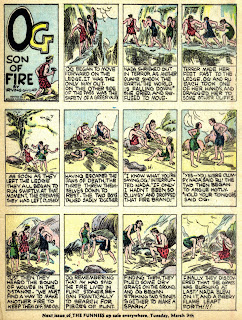 Og and friends manage to hug the ledge, even during an earthquake, by virtue of saving throws vs. science or plot, depending on which is better (or worse, depending on the severity of the quake).

One could make an argument that balance would be measured by Dexterity and that the Dexterity score should be somehow tied into this decision (whether to fall or not fall).  However, even assuming there was a modifier for ability scores that could be applied to any roll, it would still be a random chance of success, and there already is a mechanic for random chance of success in the saving throw mechanic. So ability score checks seem, to my mind, superfluous.  Though some game referees do love them, and they could certainly use them if they really wanted to. 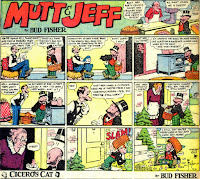