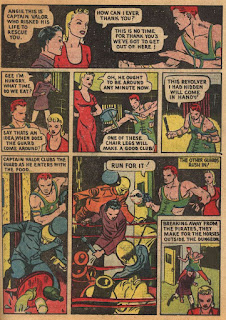 Moving on, this is Captain Valor. If the art looks above average to you, it's because this is by Mort Meskin, the Jack Kirby before Jack Kirby was Jack Kirby.

Does the writing hold up to the art? Let's consider the stool. A stool is a perfectly good clubbing weapon. Valor could have just handed the stool to Ronnie. Instead he breaks one leg off. He doesn't even break three legs off and pass the weapons around; he tosses the rest of the stool aside. And then he leads with the stool leg, when he's actually holding a gun? He could have taken the first guard prisoner and used him as a hostage. 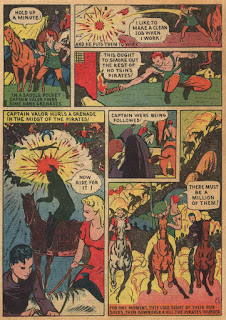 Finding grenades in the saddle bags is a huge lucky break. Too lucky? He blows up at least 15 pursuers with that last grenade (definitely possible, since I had lowered damage and extended blast radius on grenades in 2nd edition), slowing down Ho Tsin's army enough that our Heroes can ride out well ahead of their pursuers.

We don't see much of the chase scene, but losing line-of-sight is an example of an obstacle to overcome during a chase.

I suspect Valor is exaggerating about a million, though in a wilderness setting, numbers encountered could be in the hundreds. 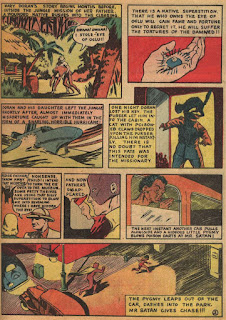 This is Mr. Satan, what would be a pretty standard pulp feature, except that it reaches deep for its inspirations. This page alone evokes both The Moonstone and The Sign of Four. 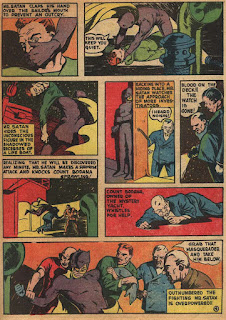 Now this page strikes me as odd. You'll note that Mr. Satan chokes the guard unconscious, but when more mobsters show up ...they find blood? I'm having trouble even figuring out how that happened, unless the guard hit his head when he went down...? 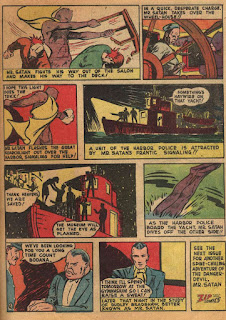 Mr. Satan appears to be hitting two bad guys at once, but I think we have to account for some time compression in that panel and he's hitting them on separate turns.

Is it relevant that Dudley Bradshaw likes to go to the gym? It is, because it speaks to what Heroes do in their downtime. Should it have some game mechanic benefit if you go to the gym? Probably not...but if enough game time passed and a fighter or mysteryman had not been to the gym, I might be willing to assign a temporary penalty to attack rolls... 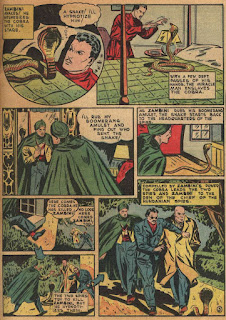 Lastly, this is Zatara -- oops, no it's not, but a clumsy imitation Zatara named Zambini the Magician. Here we see Zambini can cast Snake Charm and, I'm guessing, Hypnotic Pattern (though we never see a pattern, just its effects).

We also see him using his "wand" -- a boomerang amulet -- to cast spells. The boomerang aspect is a bit forced.

Thank goodness he doesn't say "I'll rub my boomerang amulet and find out who sent the snake!" from in bed. 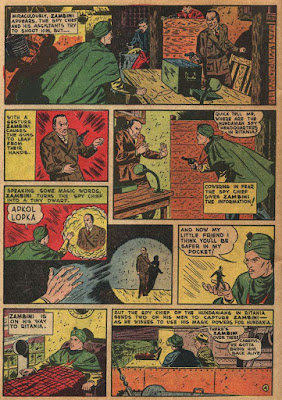 Here Zambini seems to be casting the spell Fumble.

Some of his spells -- but not all of them -- require command words. They look like they say something backwards, like Zatara's spellcasting, but they don't.

And then he casts Reduce Person... 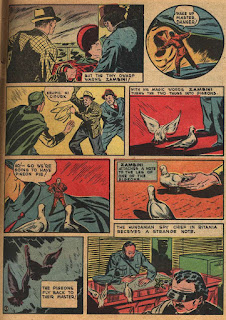 ...and, presumedly, Charm Person, so the spy chief will serve him.

Mass Polymorph is going to be a tough spell on this game; it seems fairly common, but it should be a high-level spell for what it can do. Normally I would say, okay, let's make a weaker version with just a very short duration, but these guys stay pigeons long enough to coat a statue. This would be an 8th level spell, meaning Zambini has a whopping 15 brevet ranks.

Or, he used his already cast Hypnotic Pattern to make them think they were pigeons, then used Charm Animal to make two real pigeons do what he made the two men think they were doing. Convoluted, yes, but more feasible in a balanced campaign world. 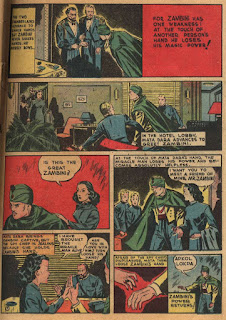 The Basic book made it clearer than 1st edition Hideouts & Hoodlums did that magic-users needed to be limited by something -- either verbal, somatic, or material components. Zambini has a unique weakness -- human contact. That may seem pretty rough, but essentially, someone's touch could do the same for the first three examples -- covering the mouth during verbal components, swatting the fingers out of alignment on somatic components, or batting the material components to the floor. And grappling always halts spellcasting, though I did not clarify this enough in the rules. 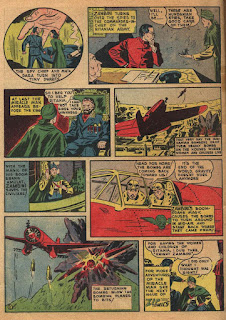 The last spell is actually a power, Turn Gun on Bad Guy. I think this is the second time I've seen this, so there does need to be a spell.

Incidentally, the countries here are "Ritania" and "Hundanian," clearly meant to be European countries. Hundanian must be a stand-in for Germany, though Ritania is less clear -- Germany had so many enemies by 1940!

Saving a king and getting knighted are high honors for a rookie Hero. I would personally have waited longer and built up to this.

(Scans courtesy of Comic Book Plus.)
Posted by Scott at 10:37 PM