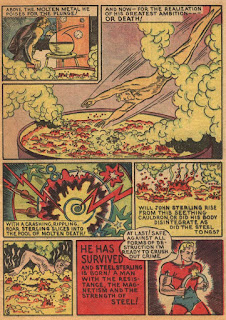 At last we get to Steel Sterling, my favorite MLJ character and, with Crimebuster, one of my two favorite Charles Biro heroes.

This is the moment of John Sterling's transformation and Steel Sterling's origin. Normally, this would just be backstory and assumed successful...but what if this worked like Traveller and origins were generated by random rolls, with a chance of failure? What if John had died during character generation?

It is not where I plan to take Hideouts & Hoodlums, but it is still thought-provoking.

"Running his fingers through his hair" is a trigger that is never mentioned again. There is no game mechanic for superheroes to have to trigger their powers, not the way magic-users need components/requirements, but they could need requirements, at the player's choice.

The power he activates is Race the Train, though with an elaborately "scientific" explanation -- flavor text -- for how he catches up to the car. He then wrecks the car, a difficult feat for good men, but I already expect I'll be granting him a few brevet ranks, since so many early superheroes are "played" that way. 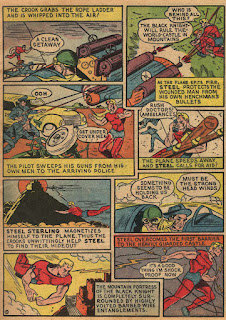 Nigh-Invulnerable Skin, combined with using himself as a living shield for the hoodlum. But is there another mechanic at work here? Since it's a trope of the genre that the bad guy gets iced before he can be spill on his boss, Steel might have had to save vs. plot in order to save him.

Steel is now using Race the Plane, explained with the flavor text of magnetic attraction. Next he uses Electrical Resistance, a 3rd-level power that made it into the 2nd edition basic book from 1st ed's Supplement III.

I would not require a wrecking things roll for a superhero to get through a barbed wire fence. Maybe a non-superhero, as a door, or a door at a +1. 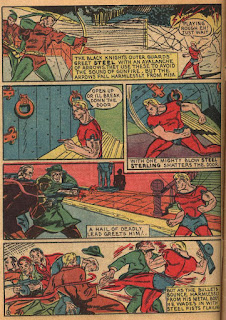 Heroes have the same protections from both arrows and bullets, but panel 5 makes it clear that Steel is buffed with Imperviousness. 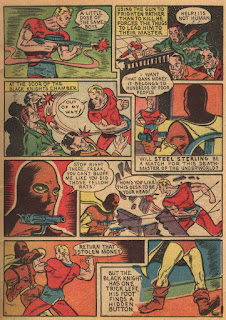 Steel made his save vs. plot to shoot bad guys -- a very rare sight for a superhero!

While most other superheroes were fighting generic bad guys, Steel starts out with a real supervillain. Not games mechanics-wise, perhaps, since he doesn't exhibit any powers or wrecks things, but he has the costume, the trappings -- including relying on traps! -- and the habit of always coming back that mark a supervillain. 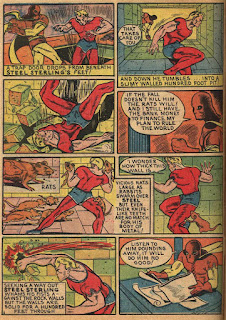 A 100' pit trap is a very dangerous trap, inflicting 10-60 damage, and the slimy walls ensure that no basic skill check will allow climbing out.

The rats are large rats -- not even giant rats -- so they probably have no more than 1 hit point each.

While door thickness doesn't matter for wrecking things, wall thickness certainly matters, with a -1 penalty per extra foot of thickness. 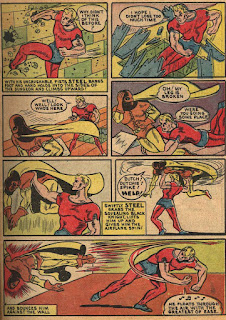 A clever use of wrecking things! Biro was already thinking of things to do with superpowers that Siegel hadn't thought of yet.

Steel uses Extend Missile Range I to let the Black Knight have it! 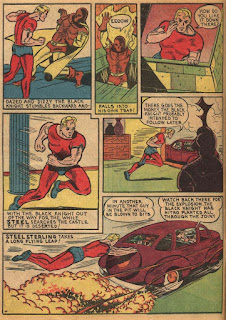 Making the villain fall into his own trap. Classic.

Steel does not use his magnetic power to follow the car this time. Is that because he's expended all his powers for the day already? 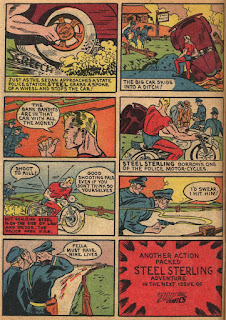 Another clever use of wrecking things -- yes, you can wreck part of a thing -- and doesn't count against his powers for the day. It looks like he was saving one last power -- Nigh-Invulnerable Skin, and uses it for his bold getaway.

Police motorcycles get "borrowed" so much in comic books, they might belong on the starting equipment list!

As you can tell, I really enjoy these early Steel Sterling stories. I hope it's not too long before I get to the next one!