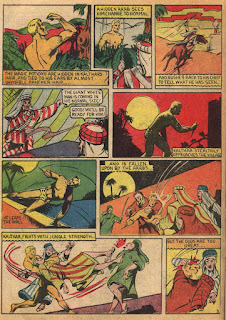 This is still Kalthar, and we've rejoined him just in time to find out where he hides his magic potions. Is invisible panther hair whiskers? I wonder why the grains even need to be tied to his ears, as weaving them into his hair (if it was longer) would have been much more sensible.

Being normal size means Kalthar isn't buffed by any powers. In such a state, five guards are easily enough to take him down. 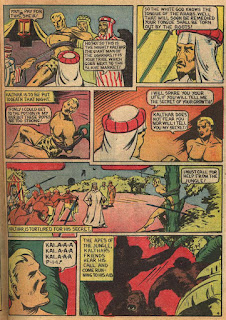 Unlike many other strips, it is clear that not everyone is speaking English; Kalthar just happens to know all their languages. I honestly don't see much difference between that and having them all speak the same language, although we'll talk about this more on the next page...

It's interesting that throwing spears at a Hero when he can move around is combat, but if he's tied up, it becomes a deathtrap, with the separate rules that apply to deathtraps (zero hit points means death instead of unconsciousness).

It seems like Kalthar is using some kind of power to summon apes, but if the apes are considered his SCMs, and he's just shouting for them, and they're near enough to hear it, isn't there a good chance they would just come anyway...? 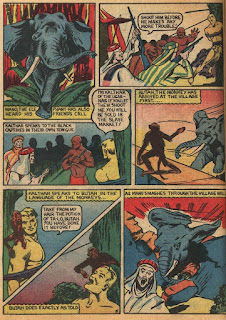 Here's where requiring Heroes to know different languages might actually be useful in the game -- because knowing the language can form a connection with someone, and give you a bonus (+1?) to your encounter reaction roll.

And last on this page is a rare example of an elephant being able to wreck through a stone wall. Elephants sure are strong! 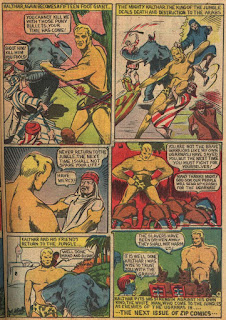 Here, for the first time, we learn that Kalthar grows 15' tall when he's activating his powers, which seems to include Nigh-Invulnerable Skin and Multi-Attack. 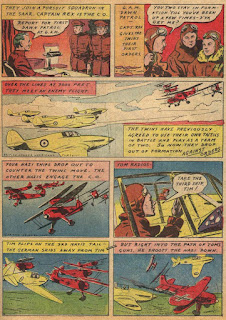 One of the nice things about this strip is that it includes the name of each plane at the bottom. I don't have to compare the drawings to photos and guess anymore!

If I ever manage to write my own aerial combat rules, trying to gain control of the facing of your opponents will be a critical function in combat. 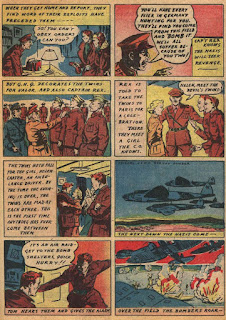 Always make sure there is some downtime in your campaign for role-playing. Friendly rivalries are a good role-playing opportunity. Romances are a little more challenging for most roleplayers.

Again, we get the name of a plane to help with research, though that is awfully hard to read... 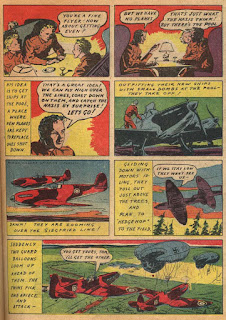 A lot of the H&H rules still can apply to aerial combat, including using skills to move silently and gaining surprise before combat -- just occurring at much faster movement rates. 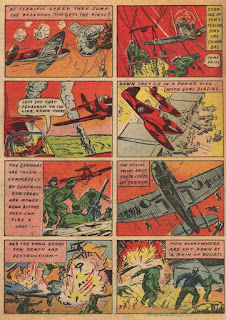 ...and yet there still seems to be a need for specific aerial stunts that work more like they used to for the 1st edition Aviator class. Here we see the stunt Power Dive in use.

This is also a prime example of the amount of carnage that can go on in a war-themed campaign. The goal seems to be accruing the highest possible death toll -- which is perfect for racking up XP in a campaign where finding treasure and trophies is not the goal. 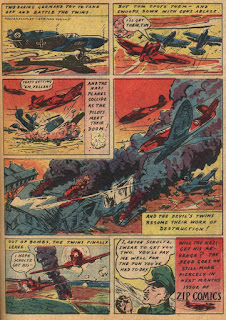 Here we have a villain turn up. You can identify villains by their ability to make return appearances; so, basically, anyone who survives going up against the Heroes could be a villain. The problem here is, the twins haven't actually met or interacted with Anton Schultz, so there's no fun in making him a villain.

(Scans courtesy of Comic Book Plus.)
Posted by Scott at 6:42 PM