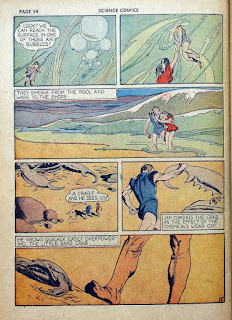 I have a few more unimpressive pages of this issue left to share. This page of Dr. Doom features Jan and Wanda discovering that the shrink ray used on them had a limited duration, but before they return to normal size they encounter an ordinary crab and -- well, I can tell you that I would not want to encounter a crab anywhere near that large. From the scale of it, it looks like it would be 30' in diameter compared to them if they were regular size. 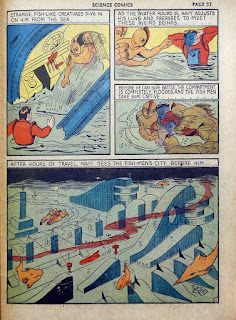 I'll give them this: Navy Jones is a clever name for an adventure feature. But this artwork is dismal and those fish-men look cartoonish in the worst way. By "fish-men" we might be supposed to be thinking of Namor's mermen, as they have an underground city somewhat similar, and fish-men are usually primitive in other comic books. 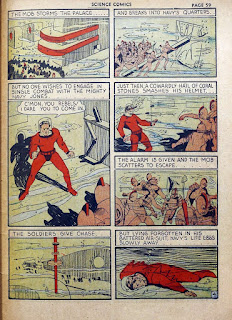 You wouldn't expect this, but apparently you can hurl rocks -- okay, coral -- underwater just as effectively as above water. 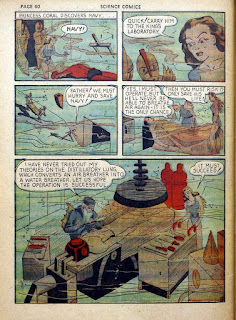 This turns out to be Navy Jones' origin story, as instead of a human fighter he's now a merman thanks to surgery. Mermen are the only class that can be half-human and still gain full racial benefits. 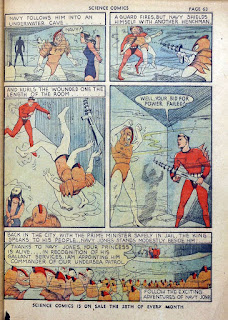 I've talked about Heroes using living shields before, so I'll just point out that Navy seems to be using the Extend Missile Range I power, which makes him a merman superhero, and our second after Namor.

(Scans courtesy of Comic Book Plus.)
Posted by Scott at 9:28 PM