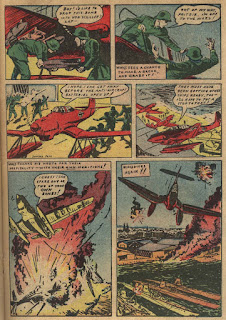 We're still looking at the third issue of MLJ's second series and the aviation/espionage adventure of Wings Johnson. I'm looking at the German seaplane bomber and am unable to identify what type of plane that is...though, the artist is correct to use the 'plus' sign on the side of the plane. 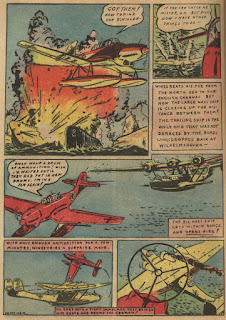 Now, it looks like the plane coming after Wings is a Dornier Do 24, a 1937 flying boat, and not what one expects to see in an aerial dogfight. 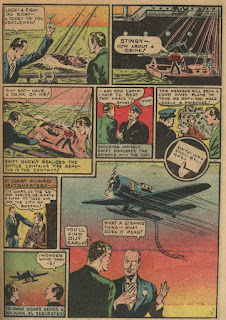 Already moving on to Swift of the Secret Service. I include this page because the technique of getting the gems off the ship interests me. It's a daring ploy, and it's carried out right in front of the Hero, so if the player is paying attention there is a good chance of catching it. 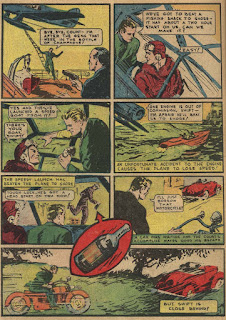 The unfortunate engine accident is an unusual complication, especially since it occurs inexplicably.

Swift made his save vs. plot very well (maybe a natural 20) to find not only a convenient motorcycle, but one conveniently with its key still in it. 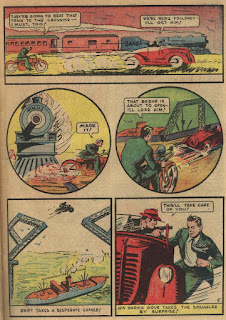 We have two more chase complications here -- the "has to beat the train to the tracks" complication and the "bridge is going up" complication. Both require an expert skill check -- or stunt -- to overcome. 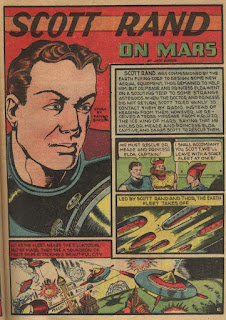 We'll also look at Scott Rand on Mars today. Here we see Martian pirate saucers, with four weapons on opposing 'sides.' It's unclear what these weapons are, whether some kind of projectile weapons or rayguns. 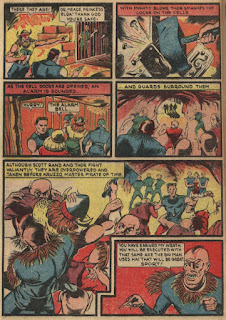 As if we didn't already have enough versions of Martians, now we get Pink Martians, bald, with pointy ears and fangs. In one previous panel they were yellow, suggesting that they can either change their colors chameleon-like, or was miscolored for one page.

Four-to-one odds are too much for Thor, meaning these Martians are super-tough, or this is not an Asgardian god (something that was never clear). 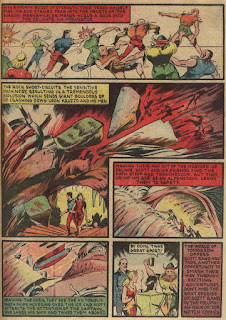 I'm as big a fan of my wrecking things mechanic as anybody, but I don't think throwing a rock into the gears should have this big an effect...unless maybe you roll triple 6's? 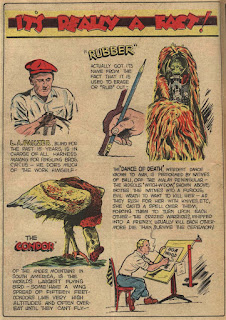 I haven't showcased some filler in awhile, and picked this page to discuss condors. If a normal sized condor has a 15' wingspan, then a large condor would have a 30' wingspan, a huge condor 45', and a giant condor 60'. A large condor would weigh as much as a full-grown man, so would have 1 HD (if a particularly ferocious fighter, it might have 2). That would also be as large as the largest flying animal ever, the quetzalcoatlus. As such, I can only speculate as to how much a huge or giant condor would weigh. Maybe enough to be 4 and 8 HD...?