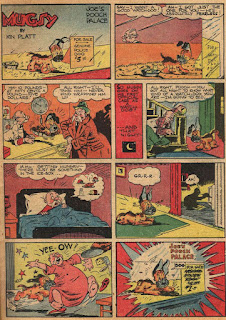 I went into my last post on Zip Comics having already read and knowing that I liked its flagship character, Steel Sterling, but now we'll dive back in and look at some features I never read before.

Mugsy is gag filler, and I don't always take the prices listed in gag filler seriously, but charging per pound for pet dogs sounds logical and a good rule of thumb for finding the price of animals in the future. 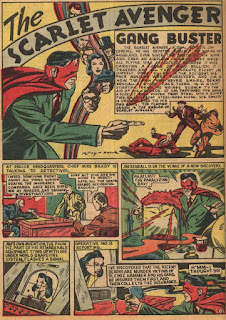 This is our next serious character, a pulp-/serial-influenced Hero called the Scarlet Avenger. Steel Sterling was well-thought out, Scarlet Avenger not so much -- the opening caption explains how his face is paralyzed and he can't smile, and he smiles on panel 3.


SA is one of many inventors of paralyzing rayguns, as well as the webcam chat, by 1940.

We don't know how many operatives SA has, but it's at least 12. That's more Supporting Cast Members than most Heroes can have, but this is why 2nd edition distinguished between SCM and hirelings/employees. 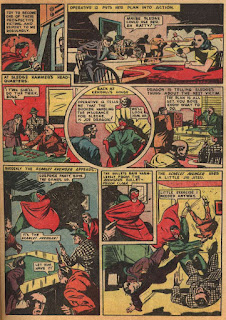 I believe this is the first, but certainly not the last, bulletproof cape in comics. I'm not sure which is more unrealistic, that weaving steel into a cloth cape will deflect bullets, or that a cape with steel woven into it would billow like that.

Regardless, we have our traditional options for how SA's gear works -- this is either a trophy item that can be taken off and shared or it's flavor text describing how SA's powers work (if he were statted as a superhero, though I'm hesitant to do so). It could even be flavor text just describing why the bullets didn't hit when the player made his save vs. missiles to dodge gunfire. 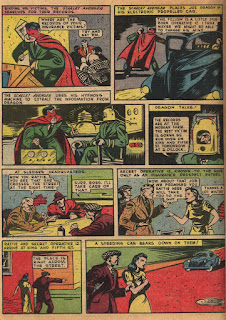 And, because golden age comic books were seldom consistent, the player doesn't even need to use the same explanation next time it happens!

The hypnosis machine seems fanciful in design but, again, could just be flavor text describing how SA uses his hypnotism skill. 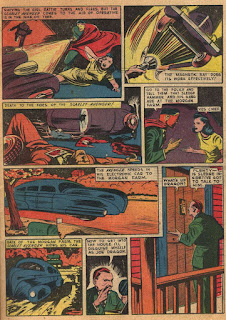 Man, SA is really brutal at murdering bad guys. He throws a car on top of them?

SA uses either the disguise skill or the Change Self power. 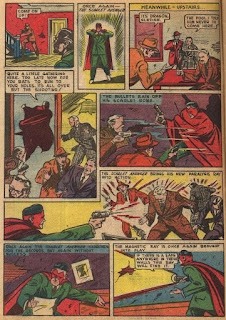 The paralysis raygun affects up to four targets at a time (slightly better than the Hold Person spell). This is most likely an actual trophy item, since we saw him inventing it during his downtime before the scenario began.

But then we go back to flavor text; game mechanically, I think SA is just searching for secret doors and saying he's using the magnetic ray to do it.


That's all the pages of Scarlet Avenger I'm sharing. It's weird; thematically, he seems so much like a mysteryman, but this story is practically begging me to stat him as a superhero (much like Centaur's Masked Marvel). 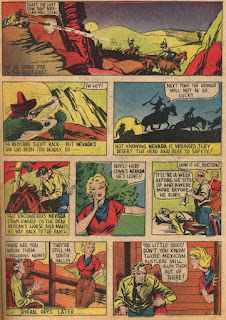 This is Nevada Jones, Cattle Detective. It's exceedingly violent, with Nevada being shot and nearly killed, on another page his horse is shot and killed, and then later Nevada is knocked out. This time, it will take Nevada a whole week to recover from being reduced to zero hit points. Perhaps because of his injuries we can overlook him calling Irene an idiot, though he's verbally abusive to the villains too and later calls the Mexican bad guys "greasers." 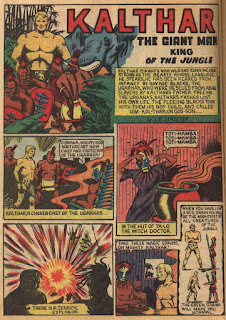 Here's an interesting twist; Kalthar is a "king of the jungle" character, but he's got magic grains that make him a superhero. Well, maybe they do...so far, they just make him taller, and that's not enough to be a superhero; he could still be statted as a fighter with the great height just being flavor text. 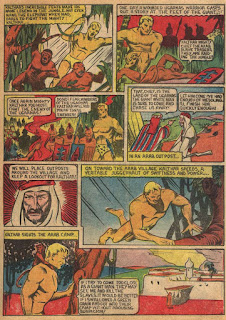 So where does it take place? The Arabs would be concentrated in North Africa, but jungle adventures don't make a lot of sense in North Africa. Maybe we'll get more clues as we go...next time!