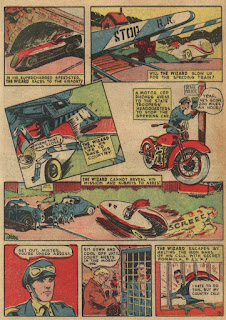 Returning to MLJ after a long time away, we find the Wizard (currently guest-starring in my home campaign!) on a new adventure.

We learn that his supercharged speedster can go 200 MPH and stop on a dime.

It's unclear how the Wizard stores Secret Formula F22X on his person; it's clearly not in a metal container. 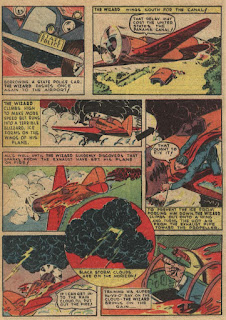 It is winter when this story takes place, so the blizzard kind of makes sense.

Sparks from the exhaust setting the plane on fire is another complication to add to a random table.

An H2-Vx-O Ray that makes rain is a pretty specific trophy item. The funny/not-funny thing about this is that a nerve gas called VX will be developed over 10 years later. 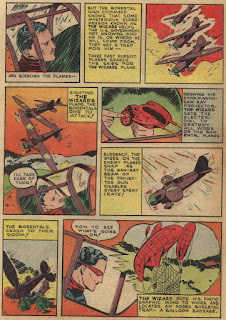 Here's another really specific trophy item -- the dynamagnosaw ray projector can be used for wrecking things at range -- but only wires.

The Wizard's photographic mind works like a Danger Sense, which needs to become a superhero power that keeps you from being surprised for the duration. 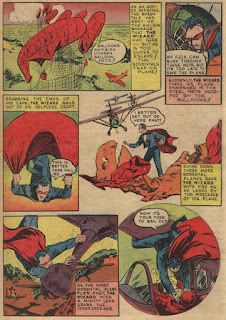 Balloon capes are a minor trophy item that allow someone a chance to fall safely, as if with the Feather Landing power, but also with a chance of the cape tearing and becoming useless.

That leap looks like the Leap I power, since the plane comes down so low. Of course, planes will always have to fly down low when Heroes are ground-based. 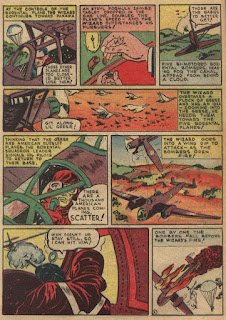 Ethyl Formula 2X-Y-BZ would be a consumable trophy only consumable by vehicles, and would allow them to act as if Hasted (by the spell) for a limited duration.

Now this tactic is ...let's say unusually described here. It seems clear to me that the Wizard is using Sean Connery's tactic from Indiana Jones and the Last Crusade where he gets the birds flying in order to blind the pilot with dead birds. It's a gruesome tactic, and one the editor seems to have shied away from, explaining in the narration that the pilots are so stupid that they can mistake geese for planes.

Considering how violent some other MLJ titles will be in the near future, it seems odd that they shied away from violence here. 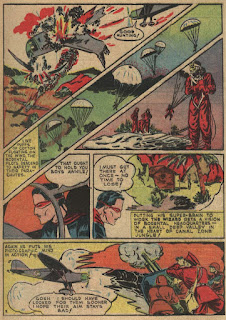 I don't have a lot to say about this page, except that I seemed to be particularly slow on the uptake with this story; it was not until this page that I realized "Borental" means Japanese. The artist even cleverly substituted the red circles on their wings for yellow triangles. 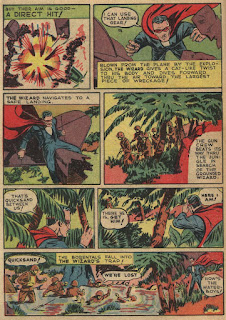 That the Wizard is unharmed by the explosion -- not only unharmed, but his cape isn't even torn! -- leads me to think he is defensively buffed with one of the higher level powers, like Imperviousness, here.

I do not recommend to my players that they try sitting on the broken off tail end of planes and trying to bring them in for safe landings by tugging on cords attached to the tail rudders; I'm pretty sure I'm going to be inflicting some falling damage regardless, unless he's using the Feather Landing power here.

Look at that, a Hero using quicksand to his advantage! 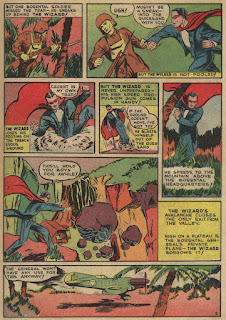 Oops, the quicksand was dangerous to both sides! I guess there was a chance (2 in 6, or better?) of walking into quicksand anywhere in that area.

The high speed propulsion gun allows him to levitate, or is flavor text for the Levitate power. 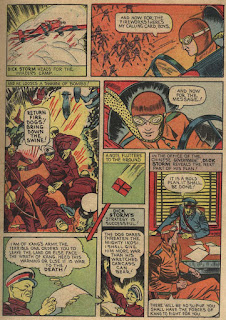 That was it for the Wizard. Now I'm going to leave you with just a taste of Dick Storm, the Hero with the worst or the best name for a comic book character, depending on how seriously you take these things.

Dick here uses tactics, trying to turn his enemies against each other. H&H module RT1 Palace of the Vamp Queen is set up for that, with two warring factions of brigands controlling opposing sides of the building -- but I never did get players interested in pitting one side against the other.