Captain Fortune stops to woo a maiden in the street. Because he's such a lady's man? No, so she'll be moved to lie about seeing him! Given the conventions of the genre, it should only take a positive encounter reaction result to get a fair maiden to do that for you. 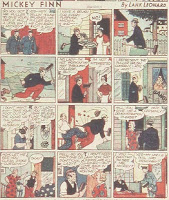 From Mickey Finn we learn that you could make up to $10 a day selling brushes door to door.

The Clock and this thug/robber tell us that this lone mobster managed to net $250,000 over three robberies. That's an awful lot of money to leave in a hideout as recoverable loot. I've tried before to deal with a solid demarcation between recoverable loot and claimable treasure, but the line remains frustratingly blurry, particularly with Heroes of different Alignments.

Back when I first read this story, I thought "Oh, how unusual -- a mysteryman knows hypnotism!" It was the first indication (there will be more) that The Clock doesn't fit just the mysteryman class. It was also an early example that the mysteryman class was varied enough and led to my adopting the concept of stunts for them instead of set skills.

By now, though, I've read every kind of character practice hypnotism and it's not so big a deal anymore... 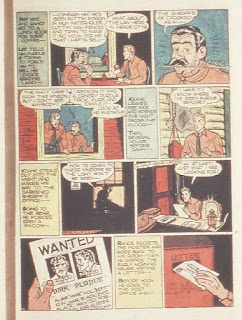 This is Rance Kean's strip, but the real star of this page is the sharpshooting outlaw Dirk Purdue who managed to shoot half the mustache off a man through an open window.

Now, there is the fact that this only happened to a supporting cast member, was not crucial to a combat or a life-or-death situation, and so the Editor could choose to hand-wave game mechanics in instances like these and just say that happened. However, doing this sets a precedent for "impossible shots" being possible in your game and players will ask to try the same things eventually.

I would require a natural 20 on the attack roll for an impossible shot like that (giving a generous 5% chance of success).

This is from a filler page called Off-Side.  I include it mainly for the gag on the right, which is what I feel like whenever people around me are talking about sports. 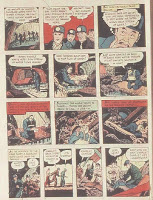 This is a well-equipped Charlie Chan, with a miner's helmet and gas mask, but even those aren't enough to save him from a cave-in. Cave-ins are tricky, mechanics-wise. The damage from the falling weight alone should be enough to render Charlie unconscious, and then the continuing damage from having that weight on top of him should kill him. Perhaps a generous Editor would allow two saves here -- a save vs. missiles to avoid the initial falling damage and a save vs. science to avoid the continuing damage (assuming the rubble all became miraculously balanced over him).

Here, Charlie beats a dynamite stick in initiative and gets the chance to toss it away; dynamite sticks get thrown at the end of the turn, ignoring normal procedure for missiles, and don't go off until their opportunity in the next turn.

It's unclear what Kirk is doing, but it seems he's shooting the second dynamite stick in mid-air. While not an impossible shot, I'd be inclined to make a dynamite stick thrown in the dark to be AC 2 or even 1...