Roy Powers and his eagle scout troop might be onto something here. If you have a wild animal to capture and you don't want to fight it, try penning it in with lots of chicken wire. But how to handle this with an in-game mechanic? I would probably make an encounter reaction roll for the lion. If it was positive, he would stay put while being hemmed in. If it was negative, he'd jump the fence as it was being erected. And, of course, if it was hostile, he would maul the eagle scouts. 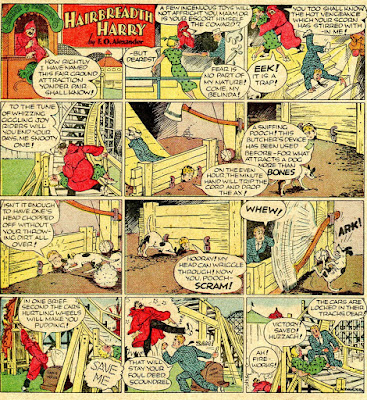 Here's an interesting trap -- the stairs fall away into a slide. Harry slides down the slide, head-first, into the stocks with a guillotine set up above them. I guess, had he gone down feet first, there would have been a chance of his leg going into the stocks and getting cut off, which is still pretty bad.

Maybe I'd roll randomly for what direction he was facing when he hit the bottom of the slide, then make him save vs. plot to avoid whatever part was at the bottom going through the hole and getting stuck. The long delay on the guillotine blade drop seems like it makes it too easy to escape, but a quick drop would make this a nasty encounter.

I'm torn on whether this qualifies as a trap or a deathtrap. On one hand, Harry falls into the trap and isn't placed directly into it. On the other hand, his nemesis is present and clearly expects Harry to die. If it's a trap, I would have the blade only do 1-10 points of damage. If it was a deathtrap, I would make it potentially lethal, or at least limb-cut-off-able. 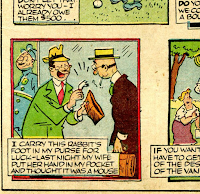 From the gag filler Life's Like That, here's a corner panel that made me chuckle out loud. 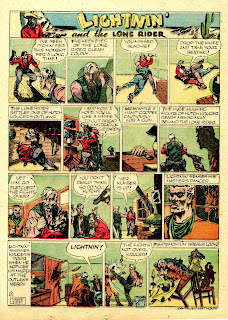 This is Jack Kirby's Lightnin' and the Lone Rider, one of the only cowboy features to give title billing to the horse. Which is extra appropriate today because, in this installment, the Lone Rider would be dead if it wasn't for Lightnin' sensing his trouble, kicking a door in, and coming inside to get mixed up in the fight. Hideouts & Hoodlums has rules for Supporting Cast Members, and even accommodates animal SCMs -- but how do you summon a SCM when you need one?

Right now, in H&H, the Editor always decided when and if a SCM shows up, unless the Hero has a means of directly contacting him/her/it. I was reading the Cortex game system recently for the Smallville RPG. In that game, a player can spend a plot point to make a featured character (SCM) show up. It merits consideration.

I had to look up what a yawl is. Apparently it's like a schooner. One or the other will likely be a trophy transport item.  But freighters? We'll see on that one, as I might stop smaller on sea-going trophy vessels.

This is why Heroes seldom take food or drink offered by suspicious people.

I'm working on the treasure section of the H&H basic book right now and here are three examples of treasures -- $200 in cash, a ring (we can assume it's worth roughly $200; if it was a lot more, the stolen cash wouldn't be as relevant), and the deed to a gold mine.