It's little uses like this -- ventriloquism for a non-serious diversion - that led me to rethink one-use stunts and expand it to include a skill system.

Used cigarettes, an empty matchbook, and broken glasses are all good clues to leave behind at a crime scene.

This seems pretty clever -- trick kidnappers into coming out of hiding by pretending you're trying to undercut them.

The first mobster clearly fails his morale save upon seeing The Clock. But later, when circumstances change, the same mobster is given a second morale save and gets a different result. 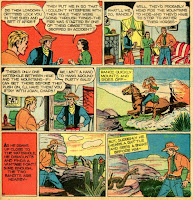 This is Rance Keane. It's unlikely that the rattlesnake is just a wandering encounter; more likely, the Editor has set encounter areas around the waterhole, like an open-air hideout, and the rattlesnake is just in one of them and the bandits in another. It's certainly unusual to set up encounter areas like this that are within line of sight with each other, but would make for a challenging scenario. 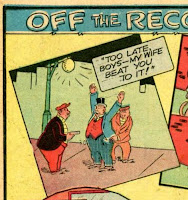 A pretty funny Off the Record panel.