I've gone over before how combat turns, particularly unarmed combat turns, work in Hideouts & Hoodlums, but the Alley Oop story in this month's issue of The Funnies urges me to revisit the issue. Though you're not seeing it here, there is a page of Alley Oop on a boxer's back, getting in six punches while his opponent seems to be getting in only one punch. This is, of course, not the case of how combat works in H&H, and it would not be fair if it did (can you imagine, though, a RPG where you got to keep attacking continuously until you missed?). Rather, both boxers are getting equal numbers of attacks, but only Alley is lucky enough to be hitting all the time, and his unlucky opponent keeps missing.

At first, I thought Alley being on the boxer's back was just flavor text, until I realized there was a game mechanic advantage to the hold he has his opponent in, as it continuously allows Alley to attack from behind (and thus at a +2 bonus). So Alley establishes the hold on turn 1, then proceeds to punch at a bonus for the next three turns (2 attacks per turn if both combatants are fighting unarmed) because his opponent keeps failing a save vs. science to get Alley off his back.

Now, how the other boxer punches Alley out of the ring is another matter entirely. This "slam" effect I'll have to deal with someday, as it becomes quite prevalent in superhero stories later on. As of right now, there is no mechanic for ordinary fighters to knock each other over long distances -- though Supplement V: Big Bang has two powers for Superheroes modified to do this very thing. 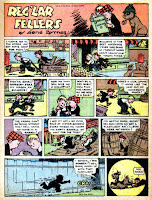 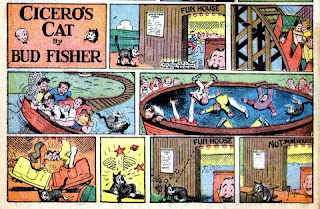 Though Mutt & Jeff have graced this blog several times, I think this is the first time its companion feature, Cicero's Cat, has ever been featured here.  I include it here because it's a bit of a mystery to me. Some of the staples of the carnival are unchanging and easily recognizable here -- the fun house, the roller coaster, the bumper cars. But what is the saucer on tracks, that seems to be different from the roller coaster? And what was that spin-around ride like, back in a day when safety was apparently not a paramount concern at carnivals? Did people really all tumble together in a big spinning pot?